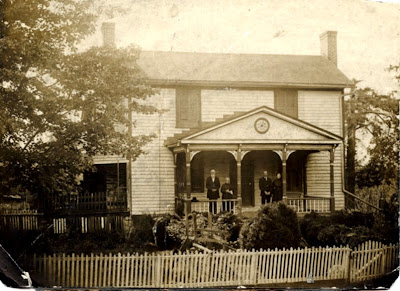 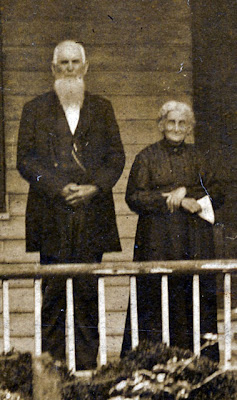 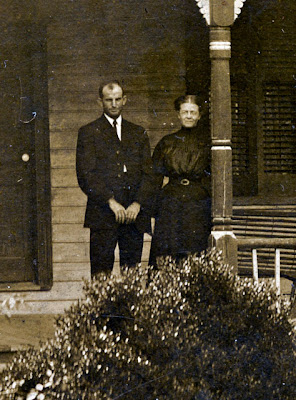 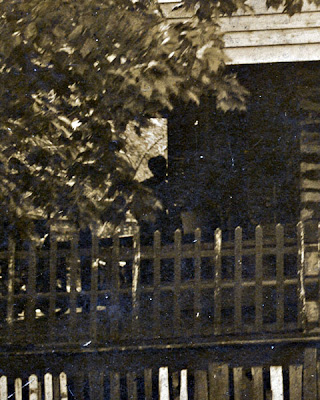 Following are Jesse Wilson Benton, Sr.'s comments on the above images of his maternal grandparents and maternal aunt and uncle at the James Madison Hodges home in the Shady Grove community of Caswell County, North Carolina:

"A picture of the James M. Hodges home, taken in the second decade of the twentieth century by Leon M. Taylor, a photographer in Danville [Virginia]. The original of the picture is the property of John M. Brackin, whose home adjoins the J. M. Hodges home place. He is the son of Ella Hodges Brackin (a sister of Elizabeth Lee Hodges, mother of Jesse W. Benton, Sr.) and John A. Brackin, both deceased.

"Memory serves that the picture was taken on the parlor or unused side of the house. In the yard, surrounded by a white paling fence, were boxwood and flowering shrubs and plants of various kinds. The entrance is to the parlor, in which were a piano, a couple of sea shells, a stereoscope, Bible, family album, pictures on the wall, and chairs. It was to a youthful mind, very prim, staid, and august.

"In the picture James M. and Martha Wilson Hodges are standing on the left hand side of the porch. On the right are their youngest child, Benton Gibbons Hodges, and his wife, Mattie Wilson Hodges. Peeping around a chimney, or abutment, is Lou James, a servant.

Permalink
Posted by RSF at 5:01 PM