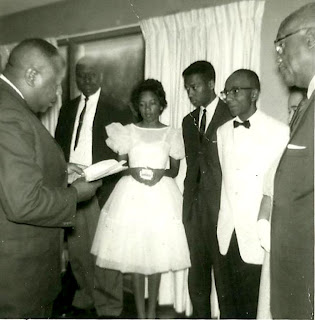 The bride, Alene George, was a teacher or advisor at the Caswell County High School in Yanceyville, North Carolina, which explains the presence of Principal Nicholas Longworth Dillard (far right). Whether he gave the bride away is not known. It appears that Clarence Garnett Graves's son, Arthur Forest Graves, was his father's best man. The family relationship of Percy Graves (second from left) is unknown.