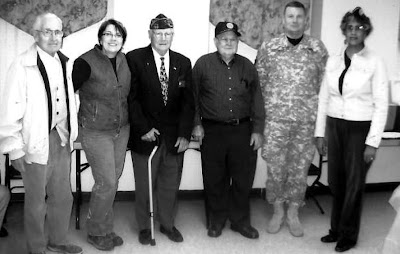 Sondra Martin, second from left, was in town on Dec. 4 to cast the hands of several local veterans who will represent Caswell County at the North Carolina Veterans Park, slated to open July 4, 2011. The veterans are, from left, Marvin Rogers, Benny Moore, Hoyte Moore, Bernie Satterfield and Connie Steadman.

The hand casting of the Caswell County veterans chosen to represent our county was completed on Saturday, Dec. 4. Artist Sondra Martin from Fayetteville State University, who has more than 25 years of experience in the craft, worked with the veterans for nearly two hours. Chief Warrant Officer Five Bernie Satterfield was chosen by veterans to represent all veterans from Caswell County. The cast of his right arm “taking the oath of service” will be bronzed for the North Carolina Veterans Park, scheduled to open July 4, 2011. CWO Satterfield is stationed at Fort Lee, Va. with over 37 years of service in the U.S. Army. The hands of four others were cast and will be in the park as supporting veterans.

They are Hoyt Moore of the U.S. Coast Guard during World War II, representing American Legion Post 89; Benny Moore of the U.S. Army during WWII, representing VFW Post 7316; Marvin Rogers of the U.S. Navy, a shipbuilder during WWII, representing American Legion Post 447, and Connie Steadman of the U. S. Air Force, now serving with the Disabled Americans Veterans post out of Burlington. The park will be located in Fayetteville across from the Special Operations Museum on 18 acres, all 100 counties in North Carolina chose five veterans and all are welcomed to attend July 4, 2011 for the grand opening. VFW Post 7316 Commander Fred Smith extends a special thank you to the Caswell County Commissioners for allowing veterans to choose which veterans would represent us all.
_______________

Permalink
Posted by RSF at 9:44 PM