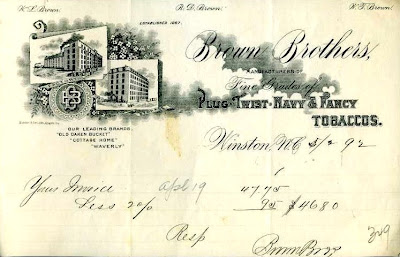 Condition is good with soiling and wear. Folds from mailing. Some pencil marks. Corner bends and creases. Reverse is blank. Measures approximately 8 1/4 by 5 3/8".

Founded around 1877, Brown Brothers Tobacco Manufacturing Co. was operating as the largest tobacco company in nearby Mocksville, N.C. It was managed by George T. Brown and his brother Rufus Brown [probably Rufus D. Brown, Jr.], both sons of Rufus D. Brown, a tobacco merchant.

In 1893, George T. Brown formed a new partnership with his brother-in-law, Robert Williamson, whose father owned two tobacco factories. One of these factories was located in the same town as Mr. Reynolds's factory, Winston, N.C., and the other one was in Caswell County, N.C. Initially, the partnership took over the elder Williamson's business. Later, the new company, Brown & Williamson, leased a small facility, hired 30 employees, and began manufacturing in February 1894. R. J. Reynolds and Brown & Williamson would continue to grow and to establish virtually every standard in the U.S. cigarette industry. Information from Tobacco Fun.
_______________

R. J. Reynolds Tobacco Company was founded in 1875, when 25-year-old Richard Joshua Reynolds started a chewing-tobacco manufacturing operation in the town of Winston, N.C. (Winston would later merge with the nearby village of Salem, creating the city known today as Winston-Salem.)

Around the same time, in the late 1870s, Brown Brothers Tobacco Manufacturing Co. was the largest tobacco company in nearby Mocksville, N.C. It was operated by George T. Brown and his brother, Rufus Brown, who were sons of a tobacco merchant [Rufus D. Brown]. In 1893, George T. Brown formed a new partnership with his brother-in-law, Robert L. Williamson, whose father owned two tobacco factories. Then the new company, Brown & Williamson, leased a small facility, hired 30 employees, and began manufacturing in February 1894.

The Birth of Brown & Williamson -  In 1883, George Brown was eager to invest $10,000 given to him by his father, Rufus D. Brown, a well-known and respected tobacco merchant. Before moving to Winston, North Carolina, in 1876, Rufus and his brother William Brown operated a tobacco factory in nearby Mocksville.

By 1878, Brown Brothers Tobacco Manufacturing Co. had become the city's largest tobacco manufacturer, employing 200. Young George's brother-in-law, 32-year-old Robert Williamson, had also grown up in the industry.  His father, T. F. Williamson, had owned factories in Caswell County, North Carolina, and in Winston.  Robert had worked first in the family business and then as superintendent of the T. L. Vaughn plant in Winston. He had resigned that position, hoping to put his manufacturing expertise to work in his own firm. Those hopes turned to reality when George Brown, a close friend as well as family, approached him with the opportunity to join in a business venture. A drop in the U.S. Treasury's gold reserve had just triggered a nationwide financial panic. But despite weaknesses in the overall economy, George Brown and Robert Williamson were undoubtedly encouraged in their enterprise by strong industry dynamics and a promising outlook.  In the fall of 1893, George T. Brown and Robert L. Williamson formally established their partnership.  In its initial months, the new partnership took over Robert's father's business. The company then leased a small facility, hired 30 employees and began manufacturing on February 1, 1894.  In 1904, Brown & Williamson broadened its product line and market presence by acquiring several smaller companies.  In 1906, the company incorporated under North Carolina state law as Brown & Williamson Tobacco Co., with George T. Brown as president and Robert L. Williamson as vice president. The following year it entered the snuff market with brands developed through the company's own research.  Over the next two decades, Brown & Williamson would achieve steady growth with its quality brands. Then in the mid-1920s, the company made two major acquisitions that would have a far-reaching impact on its future. The first was the purchase in 1925 of the J.G. Flynt Tobacco Co. and its trademarks, including a very popular smoking tobacco brand. The next year, Brown & Williamson bought R. P. Richardson Company, which had just started to market manufactured cigarettes.  By 1927, cigarettes accounted for approximately 30 percent of the total tobacco consumed in the U.S., and the market was dominated by a few leading brands. To compete, Brown & Williamson needed to expand its scope of distribution, then concentrated primarily in the Southeast. It also had to increase production capacity and leaf stocks. To accomplish these goals, a significant infusion of capital was required.  At the same time, with the principals of the company nearing retirement, a restructuring was imminent.

In October 1926, Brown & Williamson executives met in Greensboro, North Carolina, with Sir Hugo Cunliffe-Owen, chairman of the board of British American Tobacco Co. They had learned that London-based B.A.T. wished to purchase a tobacco manufacturing company in the growing U.S. market.  The ensuing negotiations were a success. Announced in Winston-Salem on March 24, 1927, the company was acquired by B.A.T. and reorganized as the Brown & Williamson Tobacco Corporation.

Source: Excerpt from Brown and Williamson Website - "Our Company: The Historical Perspective; Heritage of Tobacco"
_______________

Permalink
Posted by RSF at 8:38 PM