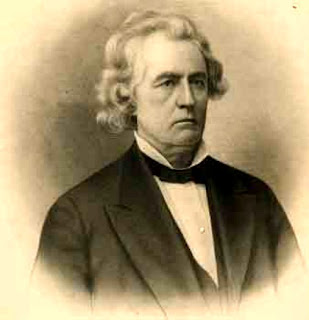 Archibald Dixon (1802-1876) was born near Redhouse, Caswell County, North Carolina on April 2, 1802. He was the son of Captain Wynn and Rebecca Hart Dixon. Both Dixon's father and grandfather fought in the Revolutionary War, the former enlisting at the age of sixteen. His grandfather, Colonel Henry Dixon, was commended by "Light Horse Harry" Lee for his service at the Battle of Camden. He was later killed at the Battle of Eutaw Springs. In 1805, Captain Dixon lost all of his property and moved the family to Henderson, Kentucky. Archibald Dixon was educated by his mother and attended the common schools of Henderson. In 1822, he began to study law in the office of James Hillyer. He was admitted to the bar in 1824, and commenced practice in Henderson. He became well-known as a skilled defense attorney and was employed in a number of cases in Kentucky and Indiana.

In 1834, Dixon married Elizabeth B. Pollit; the couple had six children. One of these was Rebecca Hart Dixon, second wife of future Kentucky governor John Y. Brown. Another daughter, Susan Bell Dixon, married Cuthbert Powell, a U.S. Representative from Virginia. One son, Henry, was elected a state senator in Kentucky, while another, Archibald, became a respected doctor in Henderson. Elizabeth Pollit Dixon died in 1851. On October 29, 1853, Dixon married Sue Bullitt. Bullitt was the paternal granddaughter of Alexander Scott Bullitt, the first lieutenant governor of Kentucky, and the maternal granddaughter of Dr. Thomas Walker, the first surveyor in the state of Kentucky. Dixon and Bullitt had three children.

Dixon was elected to represent Henderson County in the Kentucky House of Representatives in 1830. He served three consecutive one-year terms, leaving the House in 1833. Following this, he returned to his law practice and in 1835, partnered with Lazarus W. Powell. From 1836 to 1840, he represented Henderson, Daviess, and Hopkins counties in the Kentucky Senate. The next year, he returned to the Kentucky House, serving from 1841 to 1843. In 1844, Dixon was chosen as the Whig nominee for lieutenant governor on a ticket with William Owsley. Dixon defeated his opponent, William S. Pilcher, by more than 11,000 votes. At the expiration of his term, the Whig party considered nominating Dixon for governor, but instead chose the more experienced John J. Crittenden, who defeated Dixon's former law partner, Lazarus Powell.

The voters of Henderson County chose Dixon to represent them at the state constitutional convention of 1849. The Whigs nominated him to chair the convention, but he lost to the Democratic nominee James Guthrie by a vote of 50 to 43. A large slaveholder, Dixon introduced numerous measures to protect the rights of slaveholders in the new constitution. Among them were assertions that slave property was just as inviolable as any other property, that the rights of property were above constitutional sanction, and that absolute power over property cannot exist in a republic. Though some of these ideas were challenged, all eventually found their way into the Kentucky Constitution of 1850. The Whigs nominated Dixon for governor in 1851. The Democrats countered with Lazarus Powell. Still friends from their earlier days as law partners, the two often traveled together during the campaign. Cassius Marcellus Clay also entered the contest, representing the emancipationist wing of the Whig Party. Clay drew about 6,000 votes, mostly from Whigs, and Powell won the election by a small majority.

In March 1864, Dixon accompanied Kentucky Governor Thomas E. Bramlette and John Marshall Harlan, the state's attorney general, to an audience with President Lincoln to protest the recruitment of blacks into the ranks of the Union Army. The governor eventually agreed to allow the practice, but only when whites failed to meet their draft quotas. Since recruitment of blacks had been taking place in the Commonwealth for more than two months already, the concession was little more than a face-saving gesture by Bramlette. Following the end of the Civil War, Dixon retired from public life. He died in Henderson on April 23, 1876, and is buried in Fernwood Cemetery.

Permalink
Posted by RSF at 1:15 PM