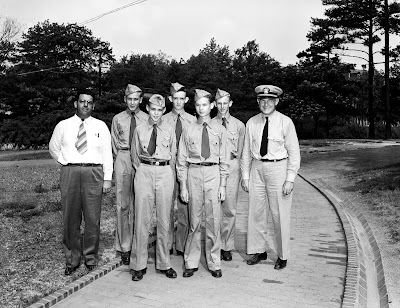 In February 1942, the United States Navy announced the establishment of a pre-flight school to train naval pilots on the campus of the University of North Carolina at Chapel Hill. UNC hosted the second stage of a one year training program for the servicemen. Cadets began arriving in May 1942 at the rate of about 300 every two weeks until a quota of 1,875 was reached. The program graduated its first class in October of that year. Competitive sports were a large part of the training program. Two hours of daily participation were compulsory and the best athletes were on varsity teams that played other military and college teams.

To accommodate the influx of servicemen, the University renovated ten dormitories, expanded Woollen Gymnasium, and built a new infirmary, recreation center (Navy Hall), and athletic field. Italian and German prisoners of war were employed in Lenoir Hall (the dining facility) when enough civilian workers could not be found.

Persons associated with the Navy Pre-flight School in Chapel Hill include Presidents Gerald Ford and George Bush, baseball great Ted Williams, and legendary Alabama football coach Paul "Bear" Bryant. No photographs of Ford or Bush, however, have been located in the collection. The Pre-flight School closed in 1945.
_______________