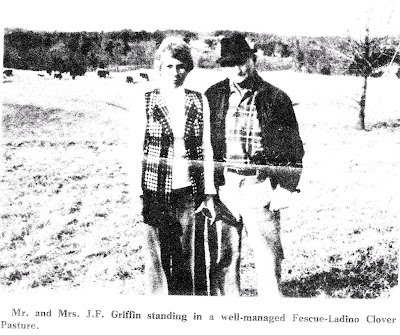 (click on photograph for larger image)
The J.F.Griffin family was named the conservation farm family of 1975 by the Caswell Soil and Water Conservation District. The Griffins’ farm is located on the Foster Road, seven miles northwest of Yanceyville. According to a prepared release from the Soil and Water Conservation District, the members of the committee felt that the Griffins have earned this recognition through the use of good conservation on their land. The release went on to point out that the Griffins used contour farming, terraces, conservation rotations, field borders, and meadow strips when growing tobacco. Due to a severe case of rheumatism, Mr. Griffin had to stop growing tobacco. At that time he converted to rolling cropland and suitable woodland to fescue-landino pasture and started a beef cattle operation. He uses cross fencing on his pastures to distribute the grazing. The pastures are fertilized and clipped annually to produce maximum grazing.

The pastures are not overgrazed. This allows the fescue to maintain a good deep root system that will hold the valuable topsoil in place. Mr. Griffin now has all the suitable pastureland sowed to fescue-landino pasture. Steep wooded areas have been preserved to provide shade for cows and erosion protection for the steep slopes. The Caswell Soil and Water Conservation District feel that the Griffins farming operation is an excellent example of good conservation and land use. Despite his rheumatism, Mr. Griffin did not quit farming and let his land grow up like so many landowners are tempted to do. Instead he adjusted his operation to something he could handle – pasture and beef cattle. He did not forsake the land.

Permalink
Posted by RSF at 8:30 PM