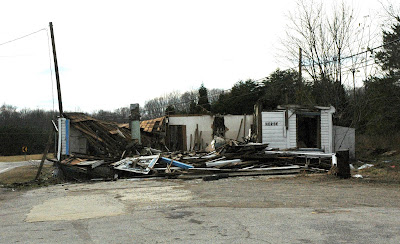 After my father's death in 1930, three of my brothers, Oscar, Julius and Clarence, operated the country store known as O. O. Watlington's Store which was built in 1906. This same store is presently owned by the grandson of O. O. Watlington, O. B. Watlington, Jr., and is called O. B. Watlington & Son. The store when first opened was largely stocked with many kinds of merchandise. They carried clothes for the whole family and all kinds of farm tools and machinery. There was a fountain with booths in the store for ice cream, milk shakes, and all kind of sodas. The store carried fabric of all kinds, thread, buttons and patterns. Also, the store carried plows, wagons, sewing machines, seed and fertilizer of all kinds. Merchandise was hauled in by wagon from the railroad station at Blanch, NC and also from Danville, Virginia. The brothers would go one day and return the next with the goods.
_______________ 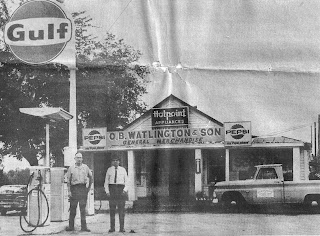 O. B. Watlington & Son General Merchandise, a thriving business in West Yanceyville, was established in 1905 by the father and grandfather of the present owners. Mr. Otis Oscar Watlington, with the help of two sons, constructed the building and opened the general merchandise business and operated it untill 1947 at which time it was sold out of the Watlington family to W. G. Carter and Son, Charles "Bo" Carter. The Carters operated the business until 1960 when it was sold back to the Watlington family, Oscar and O. B. Watlington.

Having been one of the sons who helped to build the business, Mr. Oscar Watlington remembers many interesting things about operating a business in the early 1900s. He remembers having to go to the Blanch Depot to pick up the George E. Nesson horse-drawn wagons and other supplies that were sold by the business that were delivered by rail from the manufacturer. He said that they kept a display of wagons around the store that compared to a used car lot today.

Mr. Watlington says he can also remember having to go to Danville on a wagon to pick up barrels of gasoline that were sold by the business as late as 1915.

One of the record sales that Mr. Watlington can remember was the day his father sold forty pairs of shoes in one day.

The O. O. Watlington General Merchandise was the focal point of community activity in its day. People would come from all over the county to shop and visit with their friends from other areas. Mr. Watlington said that some would stay all day. Probably one of the largest businesses in the county at that time, they carried just about everything needed in the home or on the farm. Such items as hay rakes, mowing machines, cloth by the yard and soft drinks with the cork stopper bottles. Also, they had a machine that would mix Coca-Cola and sold by the glass. 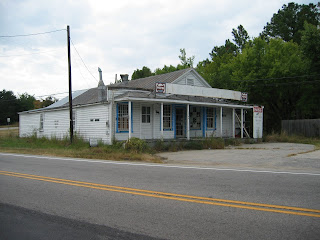 The O. O. Watlington store was one of the first in the County to have electricity. They generated their own with a small gasoline motor that furnished electric power for the store and house.

Although many changes have come about in the operations of the general merchandise business over the years, and many such businesses have sprung up throughout the County, the O. B. Watlington & Son General Merchandise continues to be a thriving business, serving the needs of the community. It has also continued to be the center of community life where friends and neighbors gather in the evening to discuss their crops, politics, domestic and international affairs. Many a world problem has been solved around the old pot-bellied stove through the years. One desiring to learn of the local happenings can visit the O. B. Watlington & Son store any evening of the week and be brought up to date or be given a prediction on the outcome of any election.

Mr. Oscar Watlington's entire life has centered around this business with the exception of a few years spent with Steed's Grocery and Caswell Furniture in Yanceyville.

Mr. O. B. Watlington, Jr., has farmed and worked for several years at Caswell Knitting Mills before going into the business in 1960 with his father.

The business handles a variety of merchandise, Gulf gas and oil products, hardware, clothing, shoes and a full line of groceries. Plans for the future call for an expansion of the business and an additional parking area in the rear of the store.
_______________

For more on the old community stores of Caswell County go to Community Stores.

For images of the Watlington Store before the recent damage go to Caswell County Photograph Collection and scroll through the photographs.

Permalink
Posted by RSF at 1:58 PM