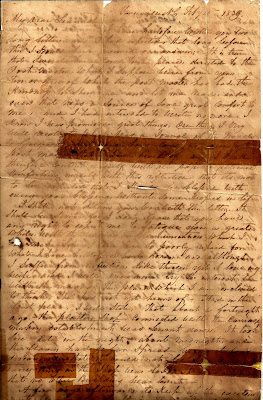 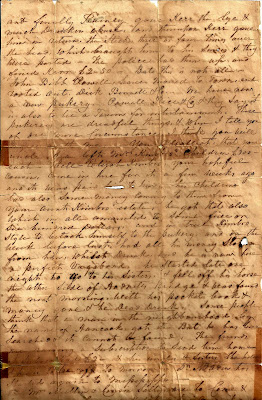 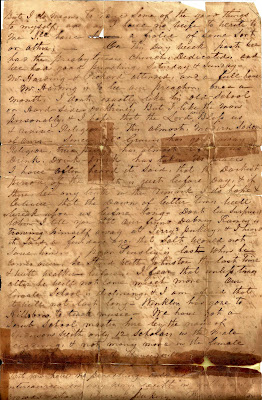 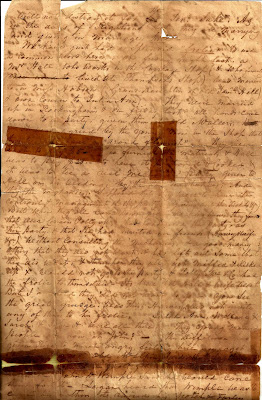 I have heretofore written you two long letters, and I have expected that long before this I should have received an answer; It is true that Several have come to this place directed to the Post Master, Which I suppose were from you, two or three of which the Post Master has had the Kindness to show me and let me read, and even that was a source of great Comfort to me, and I have intended to Write no more. I know I was promised great things. One thing I very well recollect to have was a journal of the travels to Georgia . . . . Post Master that I have heard of. And I Shall therefore content myself with all possible patience comforting myself with this reflection, that its not to be suspected that I should be blessed with very good blessing without Some Crosses in life.

I shall not detain you long with this letter. It Shall be short, for I don't know that you have any right to expect met to fatigue you a great While. With the reading and Communication Which I can Make Since I have been So poorly repaid for What I have heretofore done, and although I Suffer from reflections like these, yet I love my Wife and I will once more try to interest her with the news of this place which I am inclined to think, She has not yet heard of. And in the first place I will State; that about a fortnight ago the Plaiters Shop connected with the Carriage makers establishment was burnt down. It took fire late in the night about midnight, and the flames had so far Spread before it was discouraged that it could not be Saved, nearly every thing in the Shop was lost; It was a wonder that no other Building was burnt -

A few days afterward to Keep up the excitement we had a fight in Town. Virgil Rainey about half Drunk, with John Kerr Jr. in politicks . . . and finally Rainey gave Kerr the lye & much Drunken abuse, and thereupon Kerr gave him in return the Stick, three or four times over the head, which brought him to his Senses & they were parted. - The police had them up and fined Kerr $2.50 - But this is not all - John Bibb Powell have moved to Town, and rooted out Dick Bennett & Co. We have now a new pukery. Powell Rice & Co. & they say it is also to be a Tavern for entertainment. These pukeries are dreadful things, & when I tell you of one more Circumstance, I think you will agree with me. You recollect that your Uncle Aza [Azariah Graves 1776-1837] left Mrs, Kimbro's [Elizabeth Graves Kimbrough 1771-1828] Children $300 each. - Well - Elijah Kimbro, your hopeful Cousin, Came in here for it a few weeks ago and it was paid . . . to him, his Children had also Some Money Coming to them from Your Aunt Kimbro's estate [Elizabeth Graves Kimbrough], he got that also which in all amounted to Some five or six hundred Dollars, and in true Kimbro Style to betook himself to the pukery, and on the week before last, had all his money Stolen from him, whilst Drunk, and he is now here a perfect Vagabond. He started late one night to go to his Sisters [either Nancy or Mary Kimbrough], & fell off his horse the other Side of Hodnett's Bridge & was found the next morning with his pocket book & money gone, and he Dead Drunk. Some people think that a man in the neighborhood by the name of Hancock got it. But it has been Searched & it cannot be found. The friends are raising a Subscription to send him home. I Subscribed $2 & his uncles & Sisters the balance & he is to be off to morrow. - Dr. W____ [possibly Waden or Warren] has Started again to Mississippi - Mrs. Mullen & Cousin Sally are to Come & see me in a few days & when they come I am going to raise a Candy Store - I don't mean to take any . . . of your absence But I do mean to have some of the good things to myself and as I have no wife to write to Me I'll have . . . a frolic of Some Sort or other. - On this day week past we had the Presbyterian Church Dedicated and we had good preaching. Saturday & Sunday Mr. Harding & Pickard attended and a full house.

Mr. Harding is to be our preacher, once a month. I don't exactly like his old-school or Hard-Side Docktrines. But I like the man personally, & I hope that the Lord will bless us & revive religion in this almost Modern Sodom. Of Ours - since Col. Graves [possibly Colonel Thomas Slade Graves, father of Leannah Graves Haralson] has gone away, Religion, true piety, has almost left us & Drink, Drink; Drink has taken its place. I have often heard it said that in the darkest period of the night is just before Day, & if there be any truth in the remark I do hope and believe that the Dawn of better Times will break upon us before long - don't be Surprised when I tell you that our friend Dabney Rainey is trowing himself away at Jerry's pukery & I heard is Said a few days ago, that Salt would not Save him. - Poor Tinsley is lost when he comes over, he Staid with Johnston the last time & with Walker before. I fear that unless times alter he will not come much more - Our female School is declining, & I am afraid that it will not last long - Winkler has gone to Hillsboro to teach music - We have got a Scrub School master here by the name of Anderson with only 12 Scholars in the male academy, & not many more in the female. In fact ____ ____ ____ ____ Yanceyville. _____ _____ _____ _____ _____ _____. But we have no preaching and not much intercourse in any way, except in the gatherings & crowds about Jerry's pukery. We are to have Hank Senh? Back to us again this year, and perhaps a few. _____adventure. Ten shall be found righteous within the City. Then the Lord will not destroy it for the Ten's Sake. As in the days of Righteous ___ they are marrying and giving in marriage, ____.

We have just had a Splendid "frolic" to use the Common word here, on Friday night last a Mr. Hall who works in the Carriage Shop ( & Who formally lived at Thompson's Shop) has married to a Miss Hobson (granddaughter of Old Sam'l Hill) & own cousin to Julia Ann; They were married up in Rockingham, & on friday last all hands came down to a party, giving them at old Wallers. It was agreed by the young men in the Shop that they were to have a "grand flourish" - They were each to pay $5 to furnish the materials and Hall was to pay $20 to have it ____ & Cooked & it was to be a real Mechanics' party given to Hall on his wedding, by the other mechanics, and they (the mechanics) Supposed that they were to have the Control & Management of the party, giving out the tickets ___. But when they all came down from Rockingham they found that our Cousin Polly Mc. had considered the party as her party & that She had invited her friends. (Haney & wife ___) without Consulting the Mechanics, & a good many others that they did not want, & had left out some that they did want; & therefore they all got Miffed & Kicked up & would not go to the party & Polly Mc & Co had the frolic to themselves - Its true that Hall and wife went But I am told they did not want to go. - You see the great grudge was this; Harvey did not invite any of them to his frolic, Julia Ann, Wallace & Sarah & John H. were all there, The young Married people are now at John's - This Difference has given rise to Much angry feelings here amongst the ______ ____ ____ Old McAlpin [possibly Alexander McAlpin] Said that he thinks _____ _____ _____ _____ _____ _____ _____ _____ John D Wemple[possibly John D. Wemple, Yanceyville dentist] Said he would cane him for it - Logan? heard that Wemple was to cane his father it raised his Scotch & Farley Blood, & he told Mr. Wemple that caning was a game that two could play at, and if Mr. Wemple wished to try his hand at chivalry he would

The following commentary was provided by historian Betty Fitzgerald:

The term "pukery" was accepted as standard from the time of Shakespear until the mid 1800"s according to the World Book dictionary. Powell claims his "pukery" would also be a Tavern for
entertainment. In Milton the present Thomas Day museum-workshop was their brick stage stop, and a Tavern "boasting" a ladies entrance. Anyone who had to travel in this country spent more time "walking" the stage than riding, and the stench from "mewling & puking" sent most
into constant sea-sickness. No different from many passengers in the era before pressurization of aircraft, and those who "smelled" of liquor would have been denied boarding. A "high" time meant oblivion, like "Octoberfest", where the law puts you in the tank until consciousness returns. Meanwhile, My Logan? had shown "gentlemanly" manners in using the threat of "caning", rather than formerly, a "duel" with either pistol or sword.
_______________

Permalink
Posted by RSF at 7:34 PM