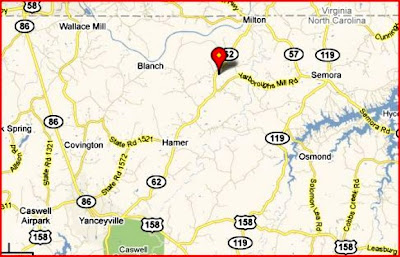 (click on photograph for larger image)
The following is from The Heritage of Caswell County, North Carolina, Jeannine D. Whitlow, Editor (1985) at 20-21 ("Estelle Community" by Clyde Douglas Willis):

Named after Virginia (Virgie) Estelle Firesheets [1881-1961], daughter of Chesley [1867-1937]and Jennie [Louisa Jane] Simmons Firesheets [1857-1947], the Post Office at Estelle was organized in 1888 and was located in the store of Chesley Firesheets, on the east side of the Milton-Yanceyville Road about three miles from Milton. Tom Rainey chose the name. The mail was delivered from Milton to each post office by buggy or cart. The Firesheets's store was later moved and made into a dwelling not many yards from the site of the store. Jennie Firesheets and her daughter [Virginia Estelle Firesheets] lived there until their deaths. The dwelling (a cabin) is now owned by Mrs. Clara Blackwell. Dr. Dodson of Milton [see below] served the Estelle community for their medical needs. He traveled by buggy in summer and sleigh in winter.

Estelle was made up of a small community of farmers, a general store and blacksmith shop. The selling of tobacco was done in Milton and Danville, Virginia. They usually traveled in groups when selling Danville because it was known that robbers came out of Danville and robbed some of them on their return trip home. Some of the families in the community at the time the post office was organized were: Barker, Brandon, Bryant, Case, Firesheets, Hagerman, Harris, Matlock, Moorefield, Newton, Pass, Rainey, Roberts, Roper, Satterfield, Steggall, Taylor, Thacker and Willis.

Many of the descendants of these families still live in and around the Estelle community and each has memories of stories and experiences they have heard and enjoyed in this small community. So many of the stories were told us by Virgie and Jennie as they whiled away the latter years of their lives, living in the old cabin that once was the Firesheets's store and Post Office. Jennie died July 6, 1947 at age 91 and Virgie died September 21, 1961, age 80. When Virgie died, people in the community said it was the first time any of them could remember a light not burning in this cabin. These two women were both counselors and entertainers for most of us, age forty and older. It is my wish that those of us who have been the recipients of this great heritage will not let it die with us but pass it on to future generations, as it was passed on to us.

The Clyde Douglas Willis who authored the foregoing article may have been related to Louisa Jane (Jennie) Simmons Firesheets through her second husband, James A. Brandon. Louisa Jane (Jennie) Simmons Firesheets Brandon and James A. Brandon had a daughter, Eugenia Lea Brandon (1897-1974) who married Williard Warner Willis (1893-1969). It is possible that Clyde Douglas Willis is a descendant (a son of Willard Warner Willis, Jr.).

The Estelle Post Office was in operation for only a few years, 1888 - 1903. Viginia (Virgie) Estelle Firesheets married George W. Francisco and is buried at the Gilead Presbyterian Church in Estelle, Caswell County, North Carolina. The couple had one known son, John Edward Francisco, born 1918.