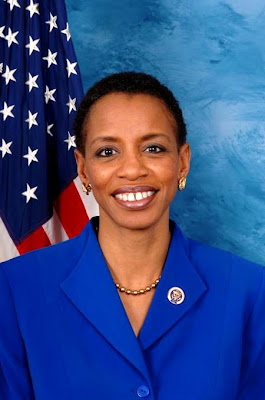 Maryland Congresswoman Donna Edwards is living the example of her own advice to local students, “you are limited only by your imagination.” Edwards, a Yanceyville native, represents Maryland’s 4th Congressional District comprising portions of Prince George’s and Montgomery Counties. Edwards was sworn in as a member of the U.S. House of Representatives in the 110th Congress in June 2008, when Rep. Albert Wynn resigned his office, and began her first full-term in the 111th Congress in 2009. Edwards grandparents and mother are from Caswell, and many of her relatives still live here. The congresswoman says she doesn’t get out of Maryland as much as she used to, but does come to Caswell for family reunions. When she’s here, Edwards said she loves to visit the church founded and named for her grandfather Henry Albert Graves, Graves Chapel Baptist Church. Edwards said she didn’t stay in Yanceyville long after she was born, since her father was serving in the Air Force, the family moved around a lot. But, in what she calls “a sort of round trip,” Edwards came back to North Carolina to attend Wake Forest University, where she graduated in 1980. After working a stint at NASA, she decided to go to law school in New Hampshire at Franklin Pierce Law Center. Edwards then did a lot of non-profit work, centered mostly around issues of domestic violence and founded the National Network to End Domestic Violence.

When her son was graduating high school in 2006, Edwards said, she decided to run for congress. That attempt failed, as she took on a seven-term incumbent. Edwards continued to work hard and tried again, defeating Rep. Albert Wynn in 2008. Wynn resigned, so Edwards took over in the middle of a congress, and then won her first full term in Nov. of that year. Edwards said spending a summer working on her great uncle Willie Frank Phillips’ farm in Mebane was an experience she will never forget. “It’s where I learned to become a gardener,” she said. “My mother was always a gardener but it’s because of her farm roots.” Edwards said her mother, Mary Edwards, and an aunt now live near her, having migrated to the Washington D.C. area. Edwards said of all her accomplishments, she is most proud of being a mother. For those who, like her, hail from Caswell, Edwards says, “They have to stretch their imaginations.” “They have to imagine themselves where they want to be. I come from really humble beginnings ... I studied a lot in school ... I read a ton ... if you work really hard, it doesn’t matter how you start; it matters how you finish.”
_______________

Congresswoman Donna F. Edwards of Fort Washington represents Maryland’s 4th Congressional District comprising portions of Prince George’s and Montgomery Counties. She was sworn in as a member of the U.S. House of Representatives in the 110th Congress in June 2008, and began her first full-term in the 111th Congress in 2009.

She serves on the Transportation and Infrastructure Committee where she sits on:

She serves on the Science and Technology Committee where she sits on:

She also serves as a member of the Tom Lantos Human Rights Commission.

Rep. Edwards has enjoyed a diverse career as a nonprofit public interest and in the private sector on NASA’s Spacelab project. Just prior to serving in Congress, she was the executive director of the Arca Foundation in Washington, DC. During her time at Arca, she gained national prominence in her efforts to:

• Secure a "living wage" for working people.
• Ensure the independence of the federal judiciary.
• End capital punishment.
• Protect Social Security, and
• Promote labor and human rights both nationally and internationally.

Rep. Edwards was the co-founder and executive director of the National Network to End Domestic Violence where she led the effort to pass The Violence Against Women Act of 1994 that was signed into law by President Bill Clinton.

Rep. Edwards completed undergraduate studies at Wake Forest University and received her Juris Doctor from Franklin Pierce Law Center. She is the proud mother of her son who is currently attending college.
_______________

Permalink
Posted by RSF at 5:21 PM