1. First Courthouse. Located in Leasburg. A commission composed of James Sanders, William Moore, John Payne, Thomas Harrison, and John Atkinson was appointed by the Caswell County Court of Pleas and Quarter Sessions to find and lay off the place where the courthouse, prison, and stocks would be built and then to see that they were built. The sheriff was directed to collect the taxes levied for this purpose and turn the funds over to the commissioners, less his commission for collecting them.

With work apparently underway on the courthouse, Thomas Combs on October 19, 1784, petitioned for authorization "to build a Shop on the Court House Lot," but the court postponed action for future "Consideration of the Commissioners Hereafter to be appointed." Finally, after nearly eight years without a proper building, the minutes of the Caswell County court for January 17, 1785, recorded that the justices "Adjourned to the New Court House." Until then, the court met in the house of Thomas Douglass. Perhaps in the interval the county had acquired the Douglass house. At any rate, the April court granted permission to "the subscribers of the old Court House" to remove "the said House off the public Lott."

A location for the new courthouse was settled by September 28, 1792, when the commissioners unanimously agreed that it should be built on the land of James Ingram, and they recommended the purchase of 100 acres from him. Work on the new county buildings apparently was underway by the fall of 1793 as William Sawyers, builder of the jail, was authorized to be paid half the costs of the buildings the following April and the remainder when the building was finished. At the same time it was directed that John Adam Wolff be paid fifty pounds, part of an allowance due to him as long ago as August, 1793, for work done on the new courthouse. In May, 1794, Wolff was paid an additional fifteen pounds; work must have been nearing completion as the list item of business for the session was to grant Hezekiah Rice permission "to occupy the House which the Court has set in this Court until further ordered by the Court." On July 29, 1794, the Caswell justices gathered for the first time in their new courthouse in the center of the county. "The Court Heartily approves of the Conduct of James Williamson their Commissioner," they agreed, "having fully settled and paid John A. Wolff for Building the Court house in Caswell County and that he be allowed for the same in the settlement and account."

John Adam Wolff, farmer and "reliable carpenter" from the Wachovia community, had come from Maryland in 1769 with his German-born parents who apparently were Lutheran rather than Moravian. He had been a constable and tax collector there for several years and was sometimes referred to as Major Adam Wolff. He obviously was well qualified to build the Caswell courthouse, as he also put up the timbers for the Moravian Church built in Salem in 1800 and still standing (as of 1977).

The second courthouse was completed in the spring of 1794. Presumably, it was in the area of the current Yanceyville Square and was constructed of wood. The first courthouse at Caswell Court House had been occupied in 1794, and by the 1830s both it and the jail were considered inadequate. In 1809, Solomon Graves for the Commissioners of Public Buildings recommended improving and repairing the courthouse. The clerk's table needed to be elevated to make it more convenient to the light, the court, and the bar. A seat and a small desk for the use of the sheriff were deemed essential. The underpinning and the windows needed to be repaired, the outside needed paint, and locks were recommended for the court house. The jail doors also needed repairing.

3. Third Courthouse. Architect John Berry from Hillsborough was awarded the contract for a new courthouse around 1831-1832. Professor Powell speculates that "the building he [Berry] erected probably resembled the handsome brick courthouse which still stands in Hillsborough." Powell added: "Caswell's new courthouse faced the east, it was two stories, built of brick, and finished in the Doric style with panelling, columns, cornices, and arches inside to make it a truly handsome structure when it was completed in the summer of 1933." 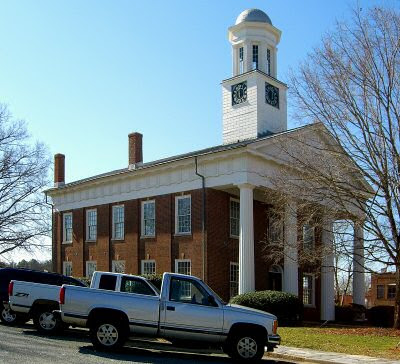 
"[In 1831] [a] committee composed of James Rainey, Benj. C. West, John C. Robers, Q. Anderson, and James W. Jeffreys was appointed to plan a new courthouse. Two plans were submitted. One was for a structure 55 by 40 feet with two jury rooms at one end, each 15 feet square with a 10-foot passage between them. Over the jury rooms was a room of equal size for the clerk and register [of deeds.] There would also be a room, a "Gallery" the committee termed it, for the reception of a large number of people. These upstairs rooms would be reached by a stairway between the jury rooms. Walls would be 26 feet high and the court room would be 40 feet square."

"A second plan called for a building 45 feet long and 83 feet wide, 25 feet high. In this one the count offices and jury room would be on the first floor and the court room on the second reached by a flight of stairs between the jury rooms."

"In either case it was recommended that the walls be of brick, windows and door sills of dressed stone, doors and windows either circular or angular at the top, and the roof hipped and so constructed as to permit a belfry or cupola. The committee proposed that inside the walls of the court room might be formed a few niches in which might be placed the Bust of some of Caswell's most distinguished Jurists and Statesmen."

The court decided upon the first (larger) plan, the 55 by 40 foot building, and in April issued a call for bids. It was determined that the cost should not exceed $5,000. Captain John Berry of Hillsborough was awarded the contract, and work was far enough along in July 1832, that commissioners were authorized to award a contract for the inside work, the justices' bench, the bar and every other thing or matter necessary and proper to be done. One year later the commissioners reported that the new courthouse was finished in a masterly and workman like manner and that they had received the building for the county. The court ordered Captain Berry to turn over the keys to Azariah Graves, the commissioner of public buildings.

However, the events leading up to the construction of this new courthouse were complicated by the need to expand the public land upon which the new building would sit. At its July 1829 session, the Caswell County Court of Pleas and Quarter Sessions took the following action:

In 1830, the Court decided to enlarge the public square westerly to an oak tree in the lot of Azariah Graves and then south to a tree in Paul Haralson's garden and east in parallel line with present square near garden railing of Elijah Graves and north to line of present square.

Earlier, Azariah Graves offered to give to the county a lot to expand the public square as far west as an oak tree that stood in his yard, provided the county paid the expense of moving "back his house on balance of the lot." This may have been the Azariah Graves storehouse that still stands in Yanceyville.

This third Caswell County courthouse must have been a rather impressive building. It was constructed of brick and stood in front of the handsome old courthouse still standing that was completed in 1861. The 1831 structure faced east and west, however. Some of the windows and perhaps some of the doors were saved from the 1831 building building and are now used in private buildings in Yanceyville.

The John Berry courthouse was damaged by fire in 1857, and for a time there was local disagreement over whether to repair it or to build a new courthouse. By early 1858 the decision had been made to abandon the old building and erect a new one.

4. Fourth Courthouse. This is the building, completed in 1861, that we still have today. Note that for years the architect was erroneously reported as John W. Cosby. The actual architect was William Percival. Taxes were of course necessary to finance construction of a new courthouse, and some protested. The Milton Chronicle on January 8, 1858, had a telling comment to make on the topic of the day. "We don't relish that word 'tax,'" the editor said, "although we pay more in one month for a filthy weed called Tobacco, and the chewing of which is killing us piece-meal, than we would be called on to pay for building the new Court House." That same issue of the Chronicle announced that the contract for the new building had not been awarded on the day designated by the commissioners in order to allow the architect further time to work on plans.

This handsome building, constructed between 1858 and 1861 is now on the National Register of Historic Places. Architecturally it is considered one of the most distinctive courthouses in North Carolina. It is described as an eclectic Victorian structure with an unusually striking main facade dramatized by the recessed entrance porch on two levels, the brightly painted capitals of corn and tobacco, and the fine arched corbel course of the cornice. At a cost of about $28,000, it was completed in the year that the state seceded from the Union. Stone used in it was quarried about half a mile away and the bricks which it required were made near the quarry. Local legend, perhaps stimulated by the magnificence of the building recounts that the builder went broke before the yard was filled in and the rear retaining wall constructed, and that he later committed suicide.

Originally an ornate cast iron fence from the Yarbrough Foundry enclosed the courthouse, but it was taken down during the first half of 1941 either to be repaired or reproduced. World War II began before the fence was ready to be erected again, and it was sold for scrap iron, deemed essential for the war effort. It also was in 1941 that the courthouse was extensively repaired and painted as a WPA project. The ancient brown sandstone exterior was covered with grey paint. In 1953 the courtroom was severely damaged by fire, but skilled workmen were brought in from Atlanta to repair the delicate plaster decorations. 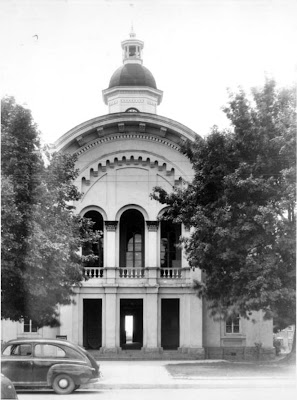 Permalink
Posted by RSF at 3:30 PM