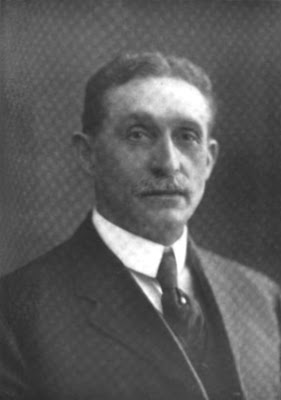 (click on photograph for larger image)
Forceful, sagacious and resourceful, Thomas Taylor Boswell, president of the Big Vein Pocahontas Coal Company, is recognized as one of those who are closest to the business concerns and financial interests of Baltimore. Prominently identified for nearly forty years with the social and commercial life of our city, he has proved himself to be possessed of those sterling traits of character which are needed and are sure to be appreciated in every community. Mr. Boswell comes of ancient Virginia stock, being descended on both sides from leading families of the Old Dominion. His maternal line can be traced back to Major Lewis Burwell, who settled about 1640 on Carter's creek, in Gloucester county, Virginia. He was descended from Edward Burwell, of Harlington, Bedfordshire, whose father was also Edward. Robert Walpole, Earl of Oxford, premier of England, and Horatio, Lord Nelson, were descendants of the Burwells through female lines. Lewis Burwell, the immigrant, owned the great plantation of Fairfield, the mansion being one of the most unusual in Virginia. It was like some medieval castle, or fortress, standing staunch and timeworn until a few years ago, when it was burned to the ground. After the Burwells had left it, which was about the beginning of the nineteenth century, it passed through many successive hands and came to be called Carter's Creek. The tombs are fit for princes, but are now, unhappily, crumbling to decay.

The Burwells, who went from Gloucester county, established handsome seats in other parts of Virginia, notably "The Grove", near Williamsburg, "Carter Hall", in Clarke county, "Stoneland", in Mecklenburg, and "King's Creek". The communion service now used at Old Abingdon, the parish church of Fairfield, on Carter's creek, was presented by Lewis Burwell, and has "L. B." inscribed upon it. Lewis Burwell was a member of the deputation sent to invite Charles II. to come to Virginia, which remained loyal throughout the period of the civil wars and the protectorate. He married Lucy, daughter of the "valiant Captain Higginson, one of the first commanders who subdued the country of Virginia from the power of the heathen". Lewis Burwell died November 19, 1658, and was buried at his seat, "Fairfield", where his tomb and that of his wife are still to be seen. Their son, also Lewis Burwell, married Abigail Smith, niece and heiress of the Hon. Nathaniel Bacon Sr., president of the council, whose whole estate, which had been intended for his nephew, Nathaniel Bacon, the rebel, was bequeathed to her and her descendants. The Burwells are thus shown to have been one of the richest as well as one of the oldest families in Virginia. Their arms are as follows : A saltire between four griffins' heads, erased ; crest, a griffin's claw with three talons grasping a twig with four leaves.

Thomas Taylor Boswell, son of William C. and Mary Armistead (Burwell) Boswell, was born October 13, 1856, in Henry county, Virginia. Mrs. Boswell was a daughter of Peyton Randolph Burwell, of Chase City, Virginia. Mr. Boswell died June 21, 1906. Thomas Taylor was the oldest of four sons, the others being John L., living in Wheeling, West Virginia ; Dr. H. H., living in Buffalo, New York, and William C., deceased. There were also three daughters : Nannie R. ; Lucy S., who married N. R. Edwards, of Williamsport, Pennsylvania, formerly of Kentucky; and Mary A., who is the wife of James Burgess, of Roland Park, Baltimore. Thomas Taylor Boswell was educated in the public and private schools of his native place, and in 1874 came to Baltimore, which has ever since been his home and the scene of his business career. On his arrival he became clerk for A. Schumacher & Company, and through his own individual efforts, strict application and hard work, rose to the position of superintendent of lines. Later, in connection with H. G. Hilken and W. G. Atkinson, he formed the Elbarge Transfer Company, which became extinct in 1906. He was also instrumental in organizing the Chesapeake and Lighterage Towing Company, which is still in existence. With these two companies he was connected for ten years.

In 1893, while still associated with A. Schumacher & Company, he founded and organized the Merchants' Coal Company, becoming its president, an office which he retained until two years ago, when the business was purchased by J. S. and W. S. Kuhns, of Pittsburgh, Pennsylvania. Mr. Boswell then organized, in April, 1909, the Big Vein Pocahontas Coal Company, with mines at Pocahontas, Virginia. Of this organization he is still president. He is a typical business man. quick to see an emergency and equally quick in devising a plan to meet it ; decisive in his methods, keenly alive to any business proposition and its possibilities, and finding that pleasure in the solution of a difficult business problem without which there can be no real success, as otherwise there is indicated a lack of that intense interest which must be the foundation of all progress in commercial and industrial lines. In addition to his presidency of the company, Mr. Boswell is also president of the Bear Run Coal & Coke Company, a new enterprise, which has recently moved its offices to Baltimore.

The welfare of his adopted city is always an object of his solicitude and an appeal in behalf of any institution or project designed to further that end never fails to secure an interested hearing and the utmost aid which it is in his power to bestow. He has been personally associated as trustee with St. Mary's Industrial School and other charitable and benevolent institutions. He contributes to the coffers of different societies, notwithstanding the fact that he is a member of none. In politics he is a staunch Democrat, taking great interest in public affairs, but has never been induced to accept office.

Mr. Boswell married, April 6, 1881, in Baltimore, Sallie E., daughter of Andrew and Jane (Stewart) Brown. Mr. Brown, who is now deceased, was a well-known contractor. Mr. and Mrs. Boswell have one son: Edward T., born August 13, 1882 ; he is a member of the Baltimore Athletic Club. He married, April 6, 1903, Winifred H. Dillinger, and they are the parents of two children : Winifred Dillinger and Sarah Catherine.

Mr. Boswell Sr. is the owner of a stock farm of one thousand and sixty acres, in Long Green valley, seventeen miles from Baltimore, and there he and his family spend the summer months. He is extremely fond of animals and finds in the management of this farm congenial recreation after the unremitting cares and strenuous toils of business. Mr. Boswell is a man of serious aims, far-sighted in business, broad in views, cherishing generous ideals, entertaining in society, and finding his friends among the young and old, rich and poor, conscious of the dignity of life, these are traits which shine in his character and make him an object of universal esteem and a representative of those interests which have most largely conserved the growth and progress of the Monumental City.
_______________

Permalink
Posted by RSF at 5:31 PM