This is a transcript of a letter from Herndon Haralson in Brownsville, Tennessee to his son Paul A. Haralson in Yanceyville, N.C. At that time Herndon and his wife were living with their son William Henry Haralson.

Transcribed October 26, 2001 from original letter by Tommy Booker. Paragraph breaks were not in the original, but are added to aid readability. All rights reserved.
_______________

I was presented a few days ago your letter of the 20th March last directed to your Brother William. I learn by that letter your principle object was, from me to obtain the information I possessed respecting your Grand Father (Archibald Murphy) Revolutionary services in that War as an officer, under the belief that his Heirs are entitled at this time to a Pension, either under an Act of Congress or that Congress has the power to pass that law, provided he died before the law was was passed (in this I allude to the act passed in the 1832 for the payment of a Pension to the Revolutionary officers and Soldiers who had served six months commencing on the 4th March 1831. I also received a letter dated the 1st Feby from your Brother Jonathan on the same Subject, and gave him the same information which I now give you.

Vizt about the last of July or the first of Augt 1780 and while I was acting as his deputy in the Clerks office of Caswell County North Caro. Genl Cornwallace in South Carolina began to consider that the State as a Conquered province and he issued his Proclamation accordingly about this time (the 1st of Augt 1780) Troops of the Militia were collected in North Caro and Marched immediately to South Caro to undeceive and Check his Lordship. accordingly a Regiment of Volunteer Militia, was formed in Caswell County and Archibald Murphy (your Grand Father) was commissioned first Major of the Regiment. (I am not positive at this time but believe that Col. William Moore was Col. Commandant) he (Maj Murphy) Marched to South Caro, joined Genl Greene's Army until Lord Cornwallace took possession of Charlotte in September 1780.

I do not now recollect the Battles in which Major Murphy fought in the South, except the one in which Lord Cornwallace attempted to fource a passage over the Catawba River; at which time and place Genl. Davidson was killed. this was about the 1st Feby 1781. - About this time the Americans took the road to Salisbury and Lord Cornwallace in pursuit. about the 15th Feby Genl Greene and his Army retreated ______ office in Caswell where I then was but I had removed the records of the office to where they were Safely preserved. at this _______ Murphy was in Command in the Army. Col. Wm Moore offered me a Captains Commission if I would beat up for volunteers. I acc_____ Commission and in a few days had a Compleat Company with ____ ist and joined Genl Greene but being sent off immediately under Genl Pickens to attack Doct Piles the Tory Col. Near Hillsboro. from this time I never saw Col. Murphy until after the battle of Guilford Court House in which we both were in. on the 15th of March 1781.

The above facts comes within my recollection and ___ and can send you Authenticated certificates. - On receipt of this you consult some Legal Council, and if there is a probability of success write immediately and I will send you the certificates. - before I conclude however permit me to suggest that I know of no law granting Pensions to the officers and Soldiers of the Militia in the Revolutionary War except the Act passed in the year 1832. and that is a Pension only for those living, so that if a Pension is Granted in this case it must be by a Special law of Congress which can & ought to be done in next Congress. I have observed hundreds of cases when Special Laws are passed for Pensions, not half as strong as this and where the Special Acts do not provide for. - William will write you in a few days. 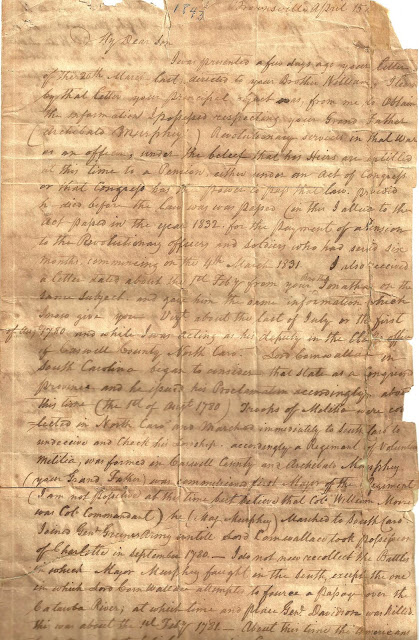 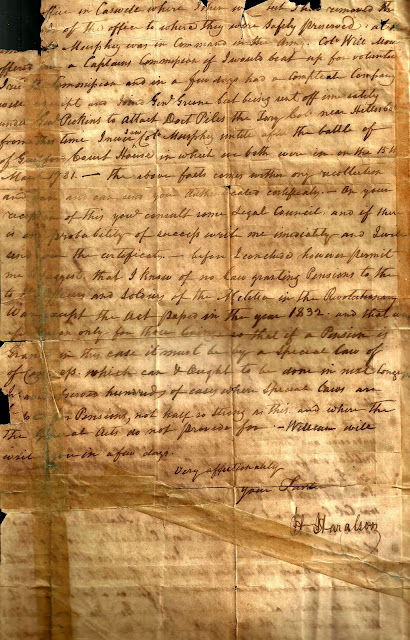 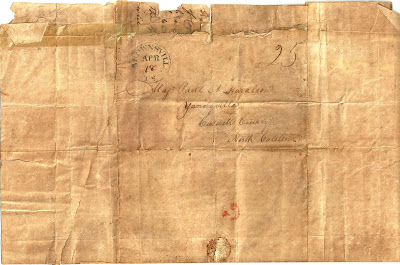