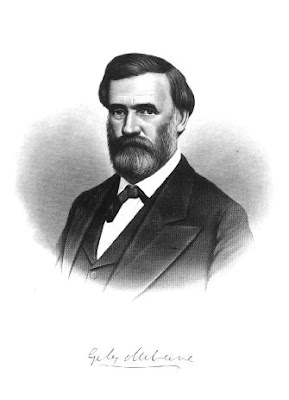 Horace Greeley, founder of the New York Tribune and one of the most brilliant journalists of the 19th century, once said: "Fame is a vapor, popularity an accident, riches take wings, those who cheer today will curse tomorrow, only one thing endures -- character!" Giles Mebane, statesman and railroad builder in his own right had that one thing that endures, character, the most valuable human asset. Giles Mebane was born on a plantation near the village of Haw River in February of 1809, the same month and same year as Abraham Lincoln. He passed away in April of 1899 at the age of 90. It ook a sane and sober man to live 90 years in that age of moonshine stills and barrooms, as was that portion of the 19th century from 1809 to 1899. The town of Mebane, and the Southern Railway through Alamance, stand as a monument for Giles Mebane.

Alamance County had her share of old-time individuals, including Judge Murphy, Judge Ruffin, Edwin M. Holt, Jonathan Worth, General Trollinger, Col. John Stockard, and William Albright. Nevertheless, if I were called upon to select the statesman who did the most for Alamance County, I would name Giles Mebane, John Stockard, and Edwin M. Holt. Mebane fought hard for the formation of Alamance County and the building of the North Carolina Railroad. Stockard fought for the new county, and could be called the father of Alamance. And Edwin M. Holt is undoubtedly the father of the textile industry in Alamance. Giles Mebane was the third generation of Mebanes born in Orange County -- the western portion which is now Alamance County -- to become North Carolina statesment.

Alexander Mebane who lived in the eighteenth century (1744-1795), Alexander was born in the Hawfields neighborhood. he started his political career as justice of th epeace and then was sheriff of Orange County. In 1783, the year the Revolutionary War officially ended, he was auditor for the Hillsboro district for one year. He was a member of the Hillsboro and Fayetteville conventions in 1789. From 1787 to 1792, he was a member of the general assembly; that was when the state capital was in Fayetteville (Capital was locate at Raleigh 1792). And from 1793 to 1795, during George Washinton's first term as President when the capital was New York City, he was one of North Carolina's representatives in Congress.

James Mebane, the second generation of Mebanes born in Orange County, North Carolina and father of Giles Mebane, was one of the early students of the University of North Carolina when its doors were opened to Carolina's bright sons. He was first president of the Dialectic Society. He was a member of the general assembly for four different terms, 1798-1803, 1808-1811 (son Giles was born in 1809), and 1821-1823 (he was speaker of the house that term). He was elected the last time to the House of Commons in 1828. He died in 1857 at the age of 83.

With this intellectual background, it is not likely that Giles Mebane had as hard time learning his three R's as legend says his contemporary, Abraham Lincoln, did. It is likely he was tutored in the fundamentals by a private teacher and his parents. However, he graduated at the University of North Carolina with the class of 1832. Giles practiced law to some extent but was a better statesman and businessman than a lawyer. Five years after graduating from the University, he married Mary Yancey, a daughter of Bartlett Yancey, of Caswell County. Bartlett Yancey, incidentally, also was a popular statesman. The county seat, Yanceyville, was named in his honor. Giles has two descendants living in the town of Mebane, Dr. Giles Yancey Mebane and Miss Myrtle Mebane.

Giles, early in life, became interested in promoting industrial progress. When word reached the ears of the Mebanes, Archibald Murphy, Dr. Joseph Caldwell and other progressive souls of Orange County, and when they heard about the formation of the first railroad in America, the Baltimore & Ohio Railroad, 1827, this progressive group said, "North Carolina can have a railroad, too." On the first day of August in 1823, the first public meeting to promote railroads in the state was held at the home of William Albright in what is now eastern Alamance County. Although Giles was only 19 years old when he went along with his dad to William Albright's home that August 1st, he had heard how Pete Cooper's steam locomotive could pull "carriages 10 miles an hour and beat any canal boat that ever collected barnacles." That was enough to fire his imagination and arouse his enthusiasm for carriages mounted on wooden rails with flanged wheels to keep them on the track. It was give years later before Giles saw a railroad in North Carolina. it was a one and and one-fourth experimental track running from a granite quarry to the site where the new capital was being built.

In 1834 and '35, the Whig party was being formed in North Carolina. Giles promptly joined the party because,he said, "Whig means progressive." He ran for the House of Commons in 1842 but was not elected. He came out for the same in 1844 and was elected. He was elected again in 1846, and in 1848 he was elected for the third and last time to the House of Commons. Incidentally, the lower house of the legislature has been known as the House of Representatives since a new State Constitution was adopted in 1868. During his years in the House of Commons representing Orange County, he served the last two with Col. John Stockard, the candidate who beat him in 1842. It was during the 1848-1850 session that these two political rivals worked together. Mebane was a Whig and worked hard for the authorization of the North Carolina Railroad. Stockard was a Democrat and worked hard for the division of Orange County into two counties. And while Mebane was not very enthusiastic about the proposed new county, he went along with Stockard for giving the state a new county. As a matter of fact, Mr. Mebane introduced the bill in the House. It was captioned: "An Act to Lay Off and Establish a New County by the Name of Alamance."

The name "Alamance" was suggested by Mrs. Giles Mebane, the former Mary Yancey, in honor of the Battle of Alamance fought in 1771. The name of the county seat was suggested by Giles Mebane, in honor of his close friend, William A. Graham, who was then governor. The town of Mebane was named for Alexander, James and Giles Mebane, and was first called "Mebanesville." When the town was incorporated in 18__, it was decided to drop the "ville" part of the name. Of course, it took the public about three years to get the habit of saying simply, "Mebane" when speaking of the "furniture town."

Col. John Stockard headed a committee appointed to select a site as near the center of the proposed county as possible. It was mainly through the influence of John Stockard that the present site of the courthouse was selected. And since the town was built around that site, Col. Stockard may be properly called the father of Graham. Also in 18_4, the General Assembly granted a charter for the North Carolina Railroad. Giles Mebane has been quoted as saying: "I was a Whig. I was for internal improvements, and I worked hard in the Legislature for the North Carolina Railroad. I knew what it meant for the country." When the question for granting a charter for a state-sponsored railroad came up there were four members in the House of Commons from the recently divided Orange County. There was Cadwallader Jones, Jr.,, Patterson H. McDade, John Stockard and Giles Mebane. Jake Berry was the state senator representing the 30th district. All but Giles Mebane voted against the railroad proposition. And like Calvin Graves, of Caswell County and Speaker in the Senate, Giles Mebane was not re-elected in 1850. It is written that it was the vote of Speaker Graves in the Senate that broke the tie in the legislative contest. That vote, it is said, was the political ruin of Senator Graves.

When the railroad reached Orange County in the early 1850's, Giles took a contract for grading that part of the road running through the town that bears his name. He was a director of the North Carolina Railroad until it was leased by the Richmond & Danville in 1871.

When a thousand or more citizens of Alamance County overflowed the courthouse at Graham to see what should be done about joining the Confederacy, the first week in March 1861, Giles was right there by Edwin M. Holt's side. Mr. Holt presided over the mass meeting and kept the states-righters and federalists from each other's throats. Arguments were heard, pro and con, and finally a vote was taken. When the votes were counted, the states-righters had it 1,114 to 234 against secession. Giles Mebane was chosen to take the decision to the State Secession Convention. So, on May 20, 1861, the North Carolina Convention at Raleigh adopted an ordinance of secession. In the fall of 1865, a few months after the surrender, Mr. and Mrs. Giles Mebane moved to Caswell County, Mrs. Mebane's native land. The same year he was a member of the "Andrew Johnson Convention." He served a number of years as chairman of the County Courts.

The year 1879, when the 2_th senatorial district was composed of Alamance, Orange and Caswell, Giles was a state senator, speaker of the senate, and the oldest member of the General Assembly. he served only one term in the state senate. He was not re-elected in 1880. He spent the remaining 18 years of his life promoting railroads in the Piedmont section of the state. He was not successful, for circumstances caused him to fail in two attempts. Encouraged by the Richmond & Danville officials, Giles called a meeting of interested parties at Yanceyville to elect officers and sell stock. The proposed railroad was to connect with the R & D at Danville, and serve Yanceyville, Mebane, Hillsboro and Pittsboro. The "dream railroad" was tentatively called, "Danville, Mebane, Pittsboro and Southern." There seems to be no record of this meeting, which was scheduled November 12, 1889 (From August 1880, "Railway Gazette").

While Gov. Thomas M. Holt was governor in 1883, there was talk of introducing a bill in the legislature to authorize another railroad in the state. Since Gov. Holt had stock in North Carolina railroads, and Giles Mebane believed in railroads, it is quite likely these two progressive gentleman did a lot of the talking. The new railroad was to be the Burlington & Southwestern. It was to extend from the railroad shops in Burlington, which were being moved away piecemeal to a point on the Cape Fear & Yadkin Valley, now the Atlantic and Yadkin which is a subsidiary of the Southern Railway. The next year, 1893, a nation-wide panic made money scarce, so the proposed bill was forgotten, while the Southern Railway took over the railroads in this section.

While reminiscing of his years in the legislature, Giles talked of his accomplishments in his declining years. A short while before he died in the spring of 1899, he said: "Col. Stockard worked for the division of the county, Alamance from Orange; but I worked for the railroad. I took a contract and built six miles of it through Orange, that part running by Mebane."

Permalink
Posted by RSF at 5:07 PM