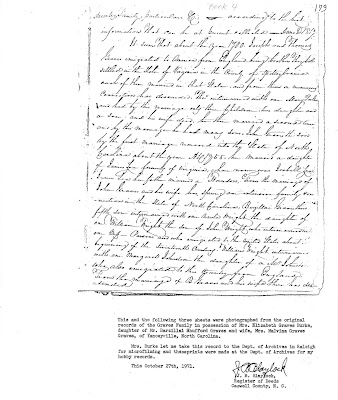 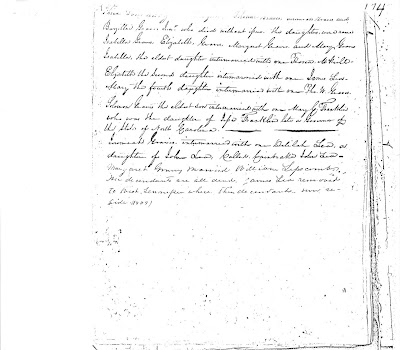 Mr. William T. Graves came across a record from the Bible of Solomon Graves, son of Rev. Barzillai Graves (who died 14 July 1827 in Caswell Co., NC). The Bible belonged to Mrs. Elizabeth Burke (nee Graves) of Yanceyville, NC, and was copied by the N.C. Archives in 1971. Although it is not certain, the record (at least in part) appears to be Solomon Graves’s attempt to recall his ancestry as of 1817. Someone has added notes concerning family births and deaths occurring after 1817. Mr. William T. Graves prepared the following transcription of the Bible record (with a few minor punctuation changes). There are probably errors in this record. For example, the record states that Joseph and Thomas Graves came to Virginia from England around 1700; that is unlikely.

Ancestry, family, particulars -- according to the best information that can be at present collected --- Anno D. 1817

It seems that about the year 1700, Joseph[1] and Thomas[2] Graves emigrated to America from England. Being brothers, they both settled in the State of Virginia in the County of Spotsylvania. Each of them married in that State and from them a numerous [necessary] connection has descended. Thos intermarried with one Mary Perkins and had by this marriage only three children, two daughters and a son, and his wife died. He then married a second time and by this marriage he had many sons. John Graves, his son by the first marriage, removed into the State of North Carolina about the year A.D. 1755. He married a daughter of James Lea, formerly of Virginia, whose name was Isabell Lea. James Lea, her father, married a Herndon. From the marriage of John Graves and his wife has sprung an extensive family connection in the State of North Carolina. Barzillai Graves, their fifth son, intermarried with one Ursula Wright, the daughter of one William Wright the son of John Wright who intermarried one Miss ------ Parsons and who emigrated to the United States about beginning of the Seventeenth Century. William Wright intermarried with one Margaret Johnston, the daughter of a Mr. [Wm] Johnston who also emigrated to this Country from England. From the marriage of B. Graves and his wife there has descended three sons and four daughters, Solomon Graves, Jeremiah Graves, and Barzillai Graves, Jun., who died without issue. The daughters were named Isabella Graves, Elizabeth Graves, Margaret Graves and Mary Graves. Isabell, the eldest daughter, intermarried with one Hosea McNeill. Elizabeth, the second daughter, intermarried with one James Lea. Mary, the fourth daughter, intermarried with one Thomas W. Graves. Solomon Graves, the eldest son, intermarried with one Mary C. Franklin who was the daughter of Jesse Franklin, late a Governor of the State of North Carolina. Jeremiah Graves intermarried with one Delilah Lea, a daughter of John Lea, called Cainbrake (sic, Canebrake) John Lea. [NOTE: The handwriting for the following is different from the handwriting for the preceding. The archivist at the N.C. Archives believes that the following text was written at a later date by someone other than the author of the preceding notes.] Margaret Graves married William Lipscomb. Her descendants are all dead. James Lea removed to West Tennessee where their descendants now reside (in 1864).


Register of Ages and Deaths

6. Margaret Isabella their fifth daughter born 30th day of May 1832

[1] This is the Joseph Graves whose daughter Mary Graves married Benjamin Cleveland.

[2] This is the Thomas Graves who married Ann Davenport.