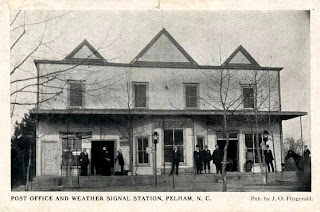 A fourth-class Post Office at Pelham was established on July 1, 1887, and John Archer Pierce, agent for the Southern Railroad Company, was appointed the first Postmaster. The office was located in the depot, and the Post Office equipment consisted of a section of homemade pigeon holes. For some time the quarterly sales of postage amounted to no more than $5.00. Mr. Pierce held this office until May 23, 1893, when James Obediah Fitzgerald was appointed Postmaster and the office was moved across the railroad into his store. Mr. Fitzgerald held the office until his death, a period of forty-seven years. Paul Vincent Fitzgerald was appointed Postmaster to succeed his father on February 1, 1940.

Mr. Morris continued serving as Postmaster until his retirement in 1976. On December 17, 1977, Adele Walton Morris was appointed Postmaster. She had served as clerk of the office since 1958. Besides being clerk she worked at the Greensboro Post Office for four years and served as Officer-In-Charge at Milton, N.C. Post Office for three months.

Serving as Rural Carriers at Pelham have been the following:

Mrs. Morris is still serving as Postmaster. Until 1983 the Post Office building was still owned by the Fitzgerald family. It was purchased in 1983 by Mr. Hugh Pryor of Pelham.

Permalink
Posted by RSF at 2:12 PM