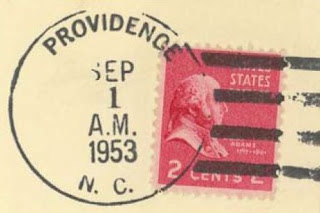 The Providence Post Office is located in north central Caswell County on County Road #1500. It was established September 1, 1953. The one rural route now served from this office was part of Route #4, Danville, Virginia. This route was originally 36 miles. At the present time, the route is 52 miles and has grown from 208 boxes to 596 boxes.

The delivery area of the Providence Post Office has grown from about 850 customers to over 2,000 in the thirty years of existence. Since the Providence Post Office has been established, the revenue has increased from $11,550 in 1954 to over $21,000 in 1983. J. Louie Oakley is the present and the only postmaster to serve at Providence. he was installed as acting postmaster in September of 1953. He served as acting postmaster until March 1955. At that time, he was appointed postmaster by President Dwight D. Eisenhower.

The route is served by William H. Carroll, Sr. who has been in that position since the beginning of the post office in September, 1953. William Carroll, Jr., J. C. Powell, Herbert L. McDowell, Sr. and Garnie Jones have served as substitute mail carriers over the years.

Permalink
Posted by RSF at 2:19 PM