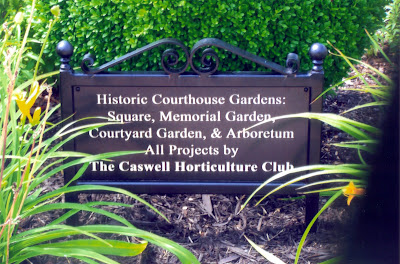 To see images of the results of the Caswell Horticulture Club's efforts go to:

Gardens of the Historic Courthouse

Even more images are available at:

For an excellent brochure to use when visiting the gardens go to:

This professionally appearing brochure was created by Caswell County resident John Swann as part of his Eagle Scout requirements. The Caswell Horticulture Club recognized the dedication and skills of this young man, and the text of that recognition can be read at:

Mr. Eddie Davis, of Durham, NC came before the Board and stated that he is a retired school teacher and for the past few months has been working with a group called Inclusive North Carolina. Mr. Davis added that the group has been looking at several different aspects of inclusion in the State and one area has to do with Memorials on Courthouse Squares. Mr. Davis informed the Board that in some counties in the State there are listings of those who have been involved in the supreme sacrifice for their country, unfortunately in some of these cases, there is not a total inclusion of all ethnic groups. Mr. Davis stated that Caswell County is not guilty of this, however, the Lest We Forget statue on the Courthouse Square does segregate the races who were involved with the World War. Mr. Davis added that he recognizes that the Memorial was probably placed there at a time when separation of the races was what one would expect and there is something to be said for maintaining the historic integrity of that period of time. Mr. Davis suggested to the County Commissioners and other organizations in the County that they look at the possibility of using the next Veterans Day to have some kind of alphabetical listing of those troops who made that supreme sacrifice during the World War. Mr. Davis stated that there may be some that take issue that there is another Memorial right beside it that pays tribute to all of the men and women in Caswell County that have given their services to their country, however, there is an issue about trying to make sure that in the 21st Century perhaps there could be a way to have an alphabetical listing of those troops who are on the Lest We Forget Memorial. Mr. Davis noted that the alphabetical listing could be attached to the opposite side of the current memorial and then the integrity and historical significance of the plaque originally placed there would be preserved, as well as in the 21st century having an alphabetical listing so that there would not be segregation of those troops. Mr. Davis added that he did not think such a plaque would be an exorbitant cost and that there are probably organizations or individuals in Caswell County that would be more than glad to contribute to such a plaque. Mr. Davis stated that Caswell County should be applauded for having such a Memorial and that all people that were involved were included. Mr. Davis stated that he felt that the people of Caswell County would appreciate the fact that the County Commissioners would lead the way in trying to make sure that the inclusion and diversity that we have in the 21st Century would deal with the freedom, democracy, and equity that is expected of such a great County.

Permalink
Posted by RSF at 8:50 PM