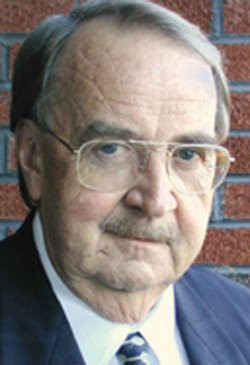 Cooper, who was born in Caswell County, N.C., on Feb. 20, 1937, had worked for the paper since 2000. In November of that year he was named publisher of the Southwest Virginia weekly group, which included the Southwest Virginia Enterprise, Smyth County News & Messenger, Washington County News, Bland County Messenger, Floyd Press, Richlands News-Press and Clinch Valley News. Two years earlier, in 1998, he had been appointed publisher of the Richlands and Clinch Valley papers.

“He was so likeable and everybody thought the world of him,” said advertising manager Audria Leffel, who worked with Cooper in Richlands. “He was really well-thought of in the community here.”
Robert MacPherson, president of Media General’s Community Newspaper Group, said he’d worked with Cooper for 10 years. During that time, MacPherson got to know Cooper in a professional and personal manner.
“He was a fine person and loved what he did and loved the people he worked with,” MacPherson said. “He will be sorely missed.”

Before joining Media General, Cooper was an executive with Southern Entertainment Corp. in Danville, where he operated WPXX-FM. Leffel said Cooper had operated the Cedar Bluff radio station WRIC before his stint in Danville. Cooper had managed and owned several radio stations in his native North Carolina and in Virginia. He was also a former general manager and editor of The Caswell Messenger in Yanceyville, N.C.

Wytheville, Va. - Samuel Fowlkes Cooper, 74 of 555 Loretto Drive, Wytheville, Va. died Friday at his home following a brief decline in health.Cooper, a Caswell native and graduate of Bartlett Yancey High School, served as managing editor of The Caswell Messenger for nearly 20 years, until 1982. Though he left The Messenger nearly 30 years ago, Cooper kept up with his hometown, having the local newspaper delivered to his Wytheville, Va. home. Nell Page, of Yanceyville, remembers working with Cooper for seven years, from 1972 until 1979.

"Sam and I wrote the paper," she said. "His title was news editor and mine was features editor. "Page said Cooper was very good to work for and always appreciative of the work she did. "He was very supportive of me and made me feel like I was making an important contribution," Page said. Page said he had a real "nose for news" and although she majored in and taught English,it was Cooper who taught her how to write a news story." It was definitely on-the-job training; but I thought he did a good job of it," Page said. "He was as nice a person as I have ever worked for." At the time of his death, Cooper was employed by Media General Corporation as publisher of a group of community newspapers in Southwest Virginia, including the Southwest Virginia Enterprise, Smyth County News Messenger, Washington County News, Bland County Messenger, Floyd Press, Richlands News-Press, and Clinch Valley news.