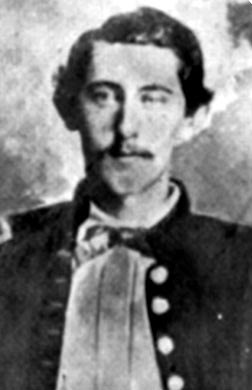 Here’s the brief story of two Gooches from Rutherford County who served with distinguished units and undoubtedly deserved a better fate.

They were first cousins who shared the nickname “Jack.”

One Jack Gooch was from a doctor’s family in Smyrna. “Big Jack” Gooch hailed from Milton. His father ran Gooch and McKnight Mercantile on the Square in Murfreesboro.

Here’s a brief recounting of their service during the Civil War, told separately to be less confusing.

John Saunders Gooch was the son of Dr. John Claiborne Gooch, builder and owner of Goochland, a large plantation home in Smyrna.

His father was born in 1800 in Caswell County, N.C. and came to Tennessee at age 18 with his parents, Nathaniel and Martha Tait Gooch.

Gooch became a physician practicing in North Rutherford County where he acquired 2,435 acres in Rutherford and Davidson counties, completing “Goochland” in 1845.

His son, “Jack” was a student at the Nashville Military Academy like his fellow Smyrna resident, Sam Davis.

Dr. Gooch allowed Jack and his friends to drill on his land and ultimately, young Gooch was voted captain of what became Company E of the 20th Tennessee Infantry regiment in Smyrna during the spring of 1861. Born in June 1842, he was 18 years old.

The company was formally trained at Camp Trousdale and ordered to Virginia. En route, the 20th Tennessee was stopped at Bristol and ordered into Kentucky via the Cumberland Gap.

From there, the unit was to fight in what is alternatively called the Battle of Fishing Creek or Mills Springs under the command of Brig. Gen. Felix K. Zollicoffer, CSA. The popular general was a newspaper editor, three-term United States Congressman from Tennessee and had served as an officer in the United States Army.

Jack Gooch nearly joined him in death at Fishing Creek. The much more experienced Union Brig. Gen. George H. Thomas had received orders to drive the Confederates across the Cumberland River and break up Crittenden and Zofficoffer’s army.

Col. Joel Allen Battle lead the 694 troops of the 20th Tennessee at Fishing Creek. Most of the Tennesseans were ill-equipped, using flintlock muskets that weren’t reliable in the rain, and it was raining that day (Jan. 19, 1862) near the bend in the Cumberland.

Crittenden was to receive the blame for being unable to concentrate the Confederate forces, but Zofficoffer, who was leading his brigade into action, fell during the opening moments of the battle. “Old Zolly” mistook Union troops for his men and was shot to death apparently by Union Col. Speed Fry.

For more than an hour, the 20th Tennessee and the 15th Mississippi fought the Union army.

Jack Gooch led Co. E in a charge against the Yankees and was shot down and initially left for dead on the battlefield as the 20th was pushed back. His men ran forward to recover his body and discovered that he was still alive.

Gooch was sent home to Smyrna to recover from his grievous wound. During his absence, he was elected lieutenant colonel of the 20th Tennessee while the army regrouped at Corinth, Miss. Still recovering, Gooch reported for duty, but his wound was slow to heal. With no prospects for a quick recovery, he resigned his commission and was honorably discharged in July 1863.

He returned home to Goochland and lived there until his death. After the war, he was a farmer and breeder of thoroughbred harness and trotting horses. He was also Postmaster of the 1st District in 1886 and served in the 1889 Tennessee House of Representatives.

After his death, the home passed to his only daughter, Mary Eliza Gooch Neely. The home remained in the Gooch family until 1942, when it was purchased by the state of Tennessee and razed.

Seward Air Force Base was built on the property. Gooch and his wife, Evie Hume, were buried at Cannon Cemetery, but their remains were re-interred at Mapleview Cemetery to make way for the impoundment of Percy Priest Lake.

Allen chose a business career and owned a successful mercantile shop on Murfreesboro’s Square. His son, Jack, after attending schools in Milton and Murfreesboro, joined the family business as a clerk.

But the charms of Murfreesboro and Walter Hill failed to hold “Big Jack,” and in 1860 he moved south to Valhermoso Springs, Ala., where his sister and her husband ran the successful Cedar Resort Hotel. Mary Lucinda Gooch was married to Jean Joseph Giers, a German who was an artist, music teacher and correspondent for the Washington Post newspaper.

While in Alabama, he performed a stunt that reinforced his nickname. The big, stout man bet and won a jug of whiskey by swimming across the Tennessee River with his son on his back. He was over 6-feet-tall with auburn hair and blue eyes.

Giers’ brother, C.C. Giers, was to win fame as a photographer in Nashville.

But “Big Jack” didn’t escape the impending Civil War. On Aug. 1, 1862 he enlisted with Co. K, Russell’s Alabama Cavalry at Guntersville, Ala. The unit was combined with six regiments of Tennessee cavalry. By 1863, he was serving in Co. I, 16th Tennessee Cavalry commanded by Gen. Nathan Bedford Forrest. By Oct. 1, 1863 he was commissioned captain of the regiment.

He served with Forrest the remainder of the war. Meanwhile, his family had returned to Walter Hill to live with her parents at “Riverside.”

He was nursing a wound in the leg, when his unit surrendered at Gainesville, Al. On the long trip back to Walter Hill, Capt. John’s wound turned to illness as he visited at his sister’s, Harriet Acklen, home near Huntsville.

Family members kept his illness from his wife, Martha, who was ill and pregnant with their sixth child.

Before his death, “Big Jack” told his family of his final request to be buried in a suit made of cotton that was picked, spun, woven and tailored in the South. He wanted to buried with his face to the South and his back to the North.

His wishes were honored.