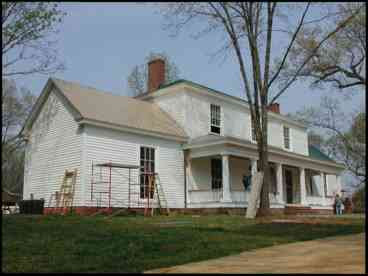 In the southwest corner of Halifax County, close to Milton, North Carolina, stands a home with connections to the wealthy Bruce family. Scholars come to Southside Virginia from across the nation to study the Bruce homes at Berry Hill and Staunton Hill. Local historians have worked through the records of Tarover and Morotock. South Bend goes unnoticed and may soon disappear. While the home. has been vacant for many years and has suffered some damage, the solid timbers of the framing are still strong.

During the Bruce years, South Bend was remodeled into a fashionable home. The frame house was built in three stages. The earliest part was a story and a half house with three rooms in a line. Later owners heard that this section was moved to its present site from an earlier location. The front section which rises to a full two stories was the second stage. A center hall with matching rooms on each side was its basic plan.
This second stage was probably the work of Fielding B. Lewis for the woodwork is typical of the 1840s and 1850s. The last work was additions placed at each end of the second house. The front four rooms of the enlarged house had new molding and trim installed around doors and windows making old and new rooms match. Written in pencil on plaster within the alcoves in the parlor are "W.T. Farley Contractor, Milton, N.C. July 21, 1876" and "Built By W.T. Farley, Milton, July 21, 1876." The date reasonably fits the third phase of construction. A servants' wing runs off the back porch and is connected by a covered porch to the main house. This wing is typical of Bruce family dwellings.

South Bend was not as isolated during the Bruce years as it appears today. The Milton and Sutherlin Narrow Gauge Rail Road Company built a line after 1877 to connect Milton to the Richmond and Danville line. The track right-of­way passed a short distance from South Bend. When a later railroad came through Milton from Clarksville to Danville, the narrow gauge was torn up and its right-of­way became a public road.

Not long after her husband's death, Kate Bruce placed South Bend up for public auction. E.B. Foote was traveling through South Boston and saw announcements for the sale. He remained in town to await the event. He purchased the home and its contents, along with 1156 acres, for $17,500. The deed was recorded in 1907. Ellsworth Baldwin Foote was a native of Ohio and resided in Centralia, Washington, with his wife, Clara Van Norman, and their four sons. When the family relocated to Virginia, Fred was fifteen, the twins, John and Jay, were eleven, and William was seven. Fred died at South Bend in the summer after his first year at V.P.I. The cemetery contains this single grave.

E.B. Foote turned South Bend into a prosperous farm and was actively involved in increasing its productivity. Much of the land was cleared and a dairy herd was established. Power to operate the milking machinery came from an electrical system installed by E.B. Foote. A mill, powered by electricity, with ample storage bins for grains produced feed for the herd. He experimented with concrete construction and several foundations and walls have survived. Through the efforts of Mr. Foote and his sons, the farm reached a high state of cultivation

E.B. Foote and his wife, Clara, turned the farm over to their twin sons, John and Jay, when they sought the warmer climate of Florida. Florida became their last home and both were buried in Delray Beach, an ocean-front resort between Fort Lauderdale and West Palm Beach. William Foote, the youngest son was settled in Colorado with no interest in farming. John and Jay were running South Bend's farming operation and they became the new owners.

When the Footes moved away from South Bend to the bright lights of Milton, South Bend entered a period of decline. Fancy Victorian wallpaper now hangs from the walls in shreds, missing window panes permit cold breezes to whistle through the still rooms, and trees grow from the foundation of South Bend.

The home has been vandalized and mantels have disappeared. If South Bend is allowed to disappear, at least some visual record has been made to preserve its memory.


From The Caswell Messenger newspaper:
Editor's Note: The following history of the Foote House was first published by The Southsider Local History and Genealogy of Southside Virginia.
_______________

From the mid 1830’s to the late 1850’s Day made and installed intricate architectural elements in as many as eighty homes. Most of these homes still exist in Caswell County, NC with at least 20 having been built or renovated with Day elements in Halifax County, VA.

South Bend (Virginia International Raceway’s “Oak Tree Tavern”) is one of these Thomas Day houses. Resting on land in the southern most bend of the Dan River this home is a “world class” example of restoration and adaptation of a “tobacco boom” plantation house. The plantation was originally developed when the Dan River was the most important mode of transportation in Halifax County. The house has numerous architectural elements attributed to Thomas Day’s workshop. This property is the only Thomas Day house open to the public on a weekly basis in its adaptation as a clubhouse and restaurant. The VIR organization spent much time and treasure in the restoration of the house and surrounding property.

Built by Fielding B. Lewis, Alexander Bruce acquired the property in 1856, and later traded this property to his brother Wilkins Bruce. Wilkins Bruce and his wife Kate Pennington kept South Bend as a Bruce residence until 1907. Not long after her husband’s death, Kate Bruce placed South Bend up for public auction. E.B. Foote purchased the home and its contents, along with 1,158 acres for $17,500.

Day elements are numerous and of high quality throughout the house. The entrance is made up of double-leaf-with-panels doors surrounded by a large transom and side lights which are contained within ornate fluted pilasters with intricate detail above the transom. These elements are repeated on the interior of the doorway. The central hall has a curvilinear newel post, curved step brackets, tobacco stick balusters, baseboards, and door facings attributed to Day. Recessed niches on either side of the mantels indicate this home contains some of Day’s most ornate work.

The property and South Bend is currently under a long term lease by the Foote family to VIR.