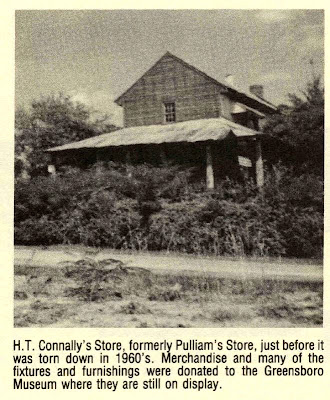 
The Connally General Store was on display at the Greensboro Historical Museum from 1961 to 2005. Last year [2006], we completed a major renovation of the 2nd floor of the Summit Building and several of the previous displays including the General Store were removed and put in storage. Several of the wall cabinets and counters are rather large. . . .

The Greensboro Historical Museum was most kind to share the following Connally General Store photographs: 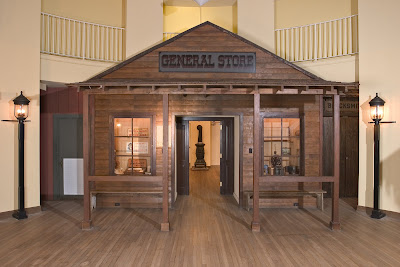 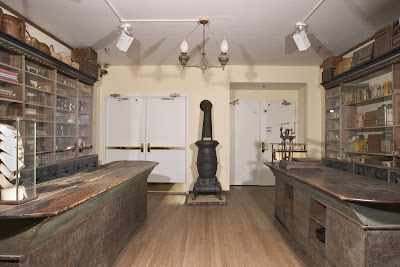 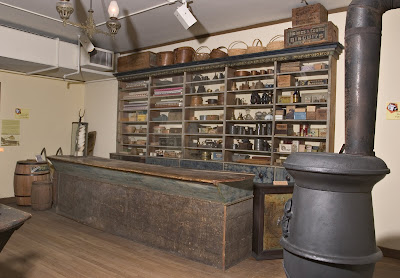 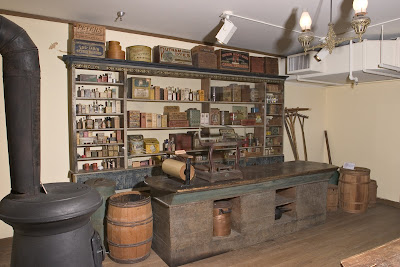 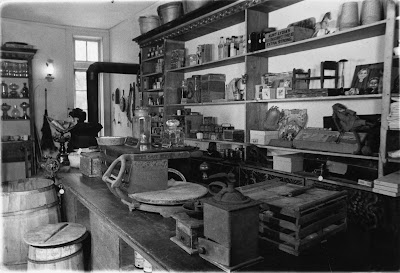 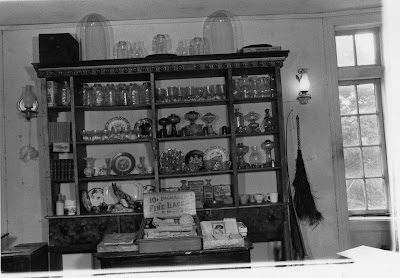 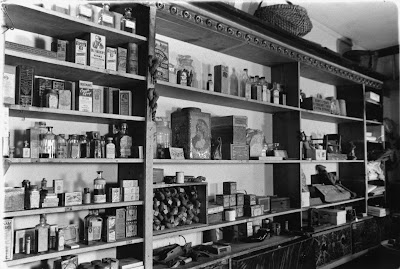 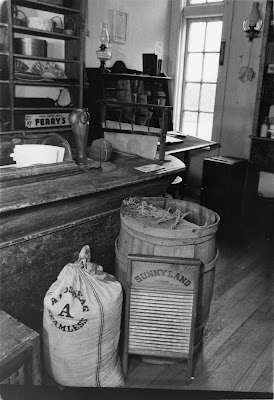 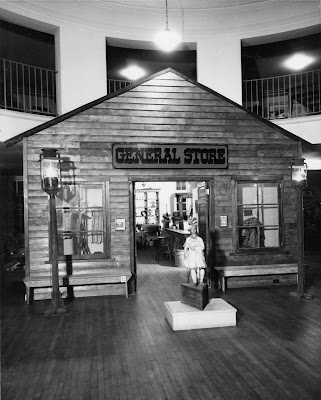 The black-and-white photographs are courtesy of the Greensboro Historical Museum.
_______________


The Greensboro Historical Museum also lists the following in its Family Papers Archives:

Up the hill was Connally's store, managed by Mr. H. T. Connally, and adjacent, was the Connally home, one of the finer homes in Leasburg. Here lived fiery, but likeable, Mr. Henry Connally, wife Sallie, daughters Mary and Mildred, and sons, George, Edgar and Walter. None married, although later on Miss Mary was married to Judge Womack and Walter married the school "marm," as I shall relate later, and lived across the "street."

Down the gentle slope and across the Semora road, stood the school house with a line of cedars along the road in front. The one teacher was Miss Virginia Underwood, who reigned over all the grades made up of thirty-five to forty pupils. There were no formal grades. One started to school at age seven, learned to read, and advanced year by year until uppper 'teens when boys just didn't come to school any more, chiefly because they became more valuable on the farm. Rare indeed was the boy who went on to higher schools. The girls, however, frequently went on to college. They, of course, trained for the teaching profession.

Miss Underwood, as we called her, was an excellent teacher. How she maintained discipline over that mixed up group and drilled a little education into their heads is beyond me. He commencement exercises at the close of each school year became something of a tradition. To me, coming from an even more primitive country school, these exercises were wonderful. They were held in the church as the only building in the village large enough. All pupils took part in commencement. I fell into it good and proper, my first school year. In trying out for parts, boys were called in one by one to find one who could sing. I got the part as Reuben in "Reuben and Rachel" with Mabel Stephens as Rachel. Our performance was a great hit -- the crowd went wild with applause.

Miss Underwood did not escape romance. We began to see Walter Connally taking her for a drive after school and the girls began to get excited. Sure enough, they were married the following summer. Then the problem arose, what should we call her as teacher. "Mrs. Connally" just wouldn't do. She settled it by informing us that she was Miss Genie Connally forever. She was indispensable in the social and religious life of the village, a lovely lady.

Connally's store was mainly operated by George, the bachelor son. George was a favorite with lady customers, for he carried a good selection of dress goods and accessories and he had a knowledge of just which of such items would be becoming to his customers. He kept individual tastes in mind when he made buying trips to Richmond. He also had a pleasant manner and voice, which customers appreciated. I would be amiss not to mention the great service George Connally gave the church. He took it on himself to act as custodian and kept the church spic-and-span condition, rang the bell, provided and arranged flowers for services, and on cold days, started fires in the two stoves that heated the building. He was also Sunday School Secretary, and part of the time, was Treasurer. Mr. Henry Connally was a bit eccentric at times. I have heard a story of how a crotchety old negro argued with him over a thirteen-cent item that was marked two-for-a-quarter. Mr. Connally grabbed a penny, went out to the woodpile, laid the penny on a block and chopped it in half and handed the negro a half and told him to "get." He put in a soda fountain for his own pleasure, but we youngsters revelled in it too.

Connally's store was rallying point for the young men on Saturday afternoon when farmers took off and came to town. The baseball field was across the street, in the factory lot, and in the summer this was the center of interest. The field was shortened in center field by the old factory building. Many hotly contested games were played between Leasburg and surrounding communities. These communities centered around a country store usually, such as Hester's Store, Edgewood, and Bushy Fork. The teams were mainly made up of farmer boys who had worked hard all week. But we knew nothing better and thought it was good baseball.

It fell the turn of the Ebenezer Church to have the Association. Crowds came from far and near to attend; some with honorable motives; some not so honorable. In town, Connally's Store was busy. Some of the second variety were on hand there. One of these was a Warren from out south in the Hester's Store area. He was a noted trouble maker and fight picker. He was on horse back that day and mean drunk. He rode his horse up the front steps of the porch and tried to urge him inside. Mr. Henry Connally would not back down from any man; he came out of the store with a pick handle and drove them back down the steps. So Warren dismounted and entered the store on foot. He staggered and stuck his elbow through a show case. He then took a swing at Fate Brooks, a much smaller man, also from the South Country. He had picked on the wrong man that day; Fate drew his pocket knife and with one swipe slashed Warren across the chest. Warren walked slowly down the road in the direction of Ebenezer. A negro took him in his buggy to the church grounds.

This was all reported to me by eye witnesses. But about this time, my father decided he and I needed some association atmosphere, so we drove out there. Not too far from the church I saw Warren reclining against a big oak with his bloody chest exposed. Dr. Love, with customary cigar in his mouth, was stooped in front of him sewing up the gash, that looked at least a foot long and more than half an inch deep. I thought "you are wasting time -- he can't live." But he did live, and I heard that he was in another fight six months later.
_______________

These are all loose papers consisting mostly of bills and receipts but also including the occasional business letter. You are welcome to come research the collection, and we would welcome the idea of your adding images from the collection to your website. We allow the use of digital cameras or flatbed scanners in the research room.
_______________ 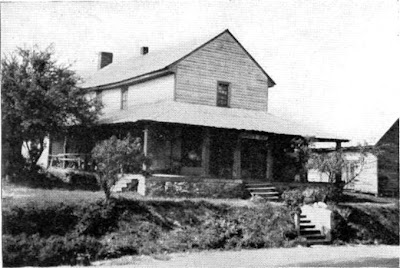 (click on photograph for larger image)
This wonderful photograph is from the book referenced below, Pills, Petticoats and Plows: The Southern Country Store, Thomas D. Clark (1944), and may have been taken by the author. The image is shown here courtesy of the successors in interest to the rights of Thomas D. Clark, to which all rights are reserved. The store was still in operation when this photograph was taken
_______________

Note that before B. G. Pulliam purchased the Leasburg general store that became Pulliam and Connally General Store it was the Hancock & Paylor store. Ownership apparently changed hands in 1869. Also note that a brother of Henry T. Connally, William Hundley Connally, married Hattie Verona Paylor. Her father, William Paylor, Jr., was a partner with R. P. Hancock in a Leasburg tobacco factory and general store.

Permalink
Posted by RSF at 2:41 PM