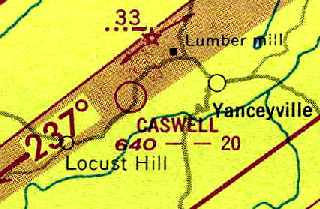 Caswell Airpark, as depicted on the October 1948 Winston-Salem Sectional Chart (courtesy of Chris Kennedy).
This little public-use airport was apparently established at some point between 1945-48, as it was not depicted on the March 1945 Winston-Salem Sectional Chart (according to Chris Kennedy). The earliest depiction of Caswell Airpark which has been located was on the October 1948 Winston-Salem Sectional Chart (courtesy of Chris Kennedy). It described the field as having a 2,000' unpaved runway.
Graham Page recalled, “That airstrip was built by my grandfather, Dr. Ludolphus Graham Page and was designed to spec by the Army Corps of Engineers.My grandfather owned several light military planes that were purchased after WWII, and both of his sons - my father and uncle - were pilots as well.”
The field was equipped with a former Civil Defense tower. According to Graham Page, “The civil air tower was purchased in the 1960s - I believe it was surplus military.” The 1962 AOPA Airport Directory described Caswell as having a single 2,100' sod Runway 4/22, and said that the airport provided fuel, hangars, and tie-downs. 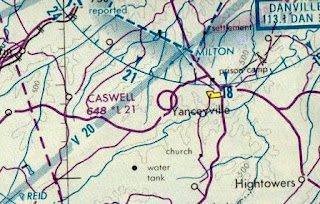 Caswell Airport was depicted on the November 1976 CG-21 World Aeronautical Chart (courtesy of Chris Kennedy) as having a 2,100' unpaved runway.
Graham Page recalled, “The airport was still active up until the late 1980s and had 4-6 'resident' planes – Cessna 152s, a Cessna 180, and a couple of Piper Tri-Pacers. Then the local pilots starting getting older and quit flying - I think the declining local economy also meant that there were not many people with the resources to continue using the airport.”
Caswell Airpark was depicted as an active public-use airport on the 1996 NC Aeronautical Chart. 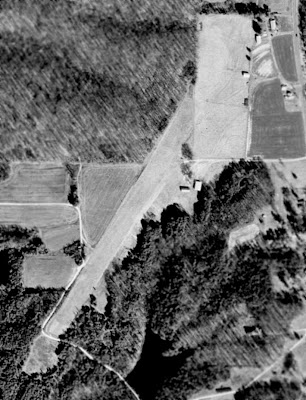 Caswell Airpark was listed in the 2000 AOPA Airport Directory, and as having a single 2,050' sod Runway 4/22.
A 2003 photo by Les Parker of the former underground hangar at Caswell Airpark.
The fascinating thing about Caswell Airpark is that it includes an underground hangar,evidently constructed under the runway during the Cold War to house a private "escape plane". Les Parker visited the hangar in 2003.His report: "The hangar is reinforced concrete and about 50' wide by 30' deep. Just enough of the floor is concrete to accommodate a small tricycle landing gear. The rest is just clay. The ramp up to the runway is paved about 2/3rds of the way up. There is about 15' of earth over the hangar up to the runway surface. There is a tractor stored out of the weather in the now unused hangar. It is open faced and I couldn't find any door mounts, but it did have electric power at one time. You can still see the conduit on the ceiling and walls.
I thought the lack of 'blast doors' was odd, considering the supposed reason for construction. I believe a natural gully or depression was used and enlarged when the hangar was built. Yanceyville could have been 'Mayberry'. There are no first strike targets, that I am aware of, anywhere near by. Danville VA is about 15 miles away, to the north. The doors do face south. I was told by a 'local' who stopped by that the field was built by a wealthy doctor. I might venture to guess that some military branch may run training operations there. The runway looked pretty well mowed and has a tree-line at the west end. There is what appears to be an old Civil Defense tower still there."


According to Graham Page, “Not far from the pictured underground hangar is an underground house / apartment that had blast doors, etc.Dr. Page could probably have been labeled as eccentric, but more than anything he just liked to experiment & try anything new.He was also an inventor and had invented part of the design for the gyrocopterand a tail section that was capable of rotating around 3 axes.”
Caswell Airpark is described in the 2004 Airport Facility Directory as having a single 1,735' turf Runway 4/22,and the owner is listed as Dr. G. Allison Page. It is still listed in the 2004 Airport Facility Directory as a public-use civilian airport, but several strange items in the Airport Operational Statistics and Remarks sections seem to indicate that this field is used predominantly for military purposes. The Airport Operational Statistics section gives a total of 50 aircraft operations per year, which are (inexplicably) described as "100% military". Furthermore, the Remarks section includes "Occasional nighttime military operations."
Graham Page reported in 2006, “In reference to the 'military' use of the airport: My uncle, Dr. Graham 'Allison' Page (who still lives on the property) has maintained an agreement with the regional military for use of the airport. They come in - do touch and go's, and occasionally there is a visit from Blackhawk helicopters running night training exercises. Nowadays there are no planes housed at the airport.”
Caswell Airpark is located west of the intersection of Route 158 and Hodges Dairy Road.
Source: Abandoned and Little-Known Airfields (31 January 2004)
_______________

According to the Page family, the airport was constructed by the Nello L. Teer Company.

Permalink
Posted by RSF at 7:07 PM