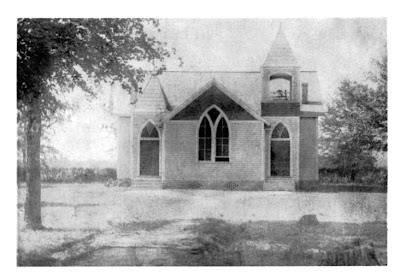 Above is the old Leasburg Methodist Church as it appeared in 1950.

In 1857, members of the Methodist Church in Leasburg, Caswell County, North Carolina, and the local Masons built a rectangular, frame, two-story building on land donated by Martha Paylor Hambrick. It was located next door to the parsonage. This building was described as resembling, and was often mistaken for, the tobacco factory nearby. Worship services were held on the first floor. the second floor was used for the meetings of the Masons and other community organizations.

The Masons disbanded and in 1896 the upper story was removed. In 1910 there was further renovation and the little frame structure, which now looked very much like a church, was given a fresh coat of white paint. Its appearance remained unchanged until the building was razed in the early 1950s. At this time it was decided that a new church building was needed because of drastically increased membership. This much larger brick structure was dedicated on May 17, 1953 and is the building presently in use. A steeple was added in 1963 and at this time Miss Ella Thompson and Miss Helen Graves donated the chimes which call people to worship services, funerals, and to meditation in the evening. Ernest Winstead sees that these are working properly. The fellowship hall was added to the rear of the church in 1967. It was built by church members, the pastor, nonmembers, and people from other churches. The latest change to the appearance of this building has been the covered walkway added to the front of the entrance in the late 1970s.

Below is a photograph of the current Leasburg United Methodist Church building: 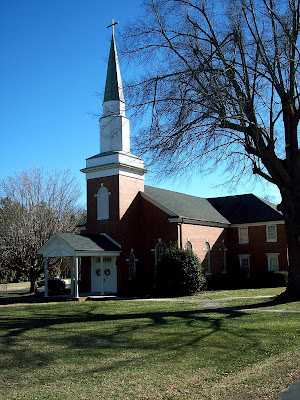 (Click on Photograph for Larger Image)
Permalink
Posted by RSF at 2:05 PM