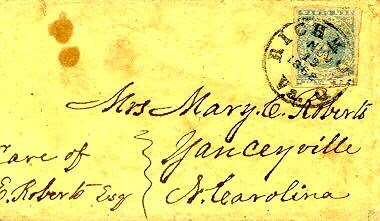 John R. L. Roberts was a Confederated States of America veteran, serving in Company A of the 13th Regiment of North Carolina Troops for four years: from 29 April 1861 until the parole at Appommatox, Virginia, on 9 April 1865. The Heritage of Caswell County, North Carolina, Jeannine D. Whitlow, Editor (1985) at 457 (Article #606 "John Willie Roberts" by Mrs. Joyce G. Miller)

Was this a letter from John R. L. Roberts to his wife Mary J. Parish Roberts while John was serving during the Civil War? Did John have time to write home during the "lull" before the Battle of Fredericksburg on 13 December 1862? Frederisburg is near Richmond, Virginia.
_______________

Embarrassed by General McClellan's repeated defeats and apparent lack of commitment in prosecuting the war, Lincoln replaced him on November 7 with General Ambrose Burnside. Burnside launched a winter campaign against the Confederate capital, Richmond, by way of Fredericksburg, a strategically important town on the Rappahannock River. The Federal Army of the Potomac, 115,000-strong, raced to Fredericksburg, arriving on November 17. There were only a few thousand Confederates on hand to challenge them, yet the Federal advance ground to a halt on the eastern bank of the Rappahannock, opposite the city. Burnside's campaign was delayed for over a week when material he had ordered for pontoon bridges failed to arrive. Disappointed by the delay, Burnside marked time for a further two weeks. Meanwhile, Lee took advantage of the stalled Federal drive to concentrate and entrench his Army of Northern Virginia, some 78,000-strong, on the high ground behind Fredericksburg.

With the arrival of the pontoons, Burnside crossed the river on December 11, despite fierce fire from Confederate snipers concealed in buildings along the city's river front. When the Confederates withdrew, Federal soldiers looted the town, from which the inhabitants had been evacuated. By December 13, Burnside was prepared to launch a two-pronged attack to drive Lee's forces from an imposing set of hills just outside Fredericksburg.

The main assault struck south of the city. Misunderstandings and bungled leadership on the part of the commander of the Federal left, Major General William B. Franklin, limited the attacking force to two small divisions - Major General George G. Meade to lead; Major General John Gibbon in support. Meade's troops broke through an unguarded gap in the Confederate lines, but Jackson's men expelled the unsupported Federals, inflicting heavy losses. Burnside launched his second attack from Fredericksburg against the Confederate left on Marye's Heights. Wave after wave of Federal attackers were mown down by Confederate troops firing from an unassailable position in a sunken road protected by a stone wall. Over the course of the afternoon, no fewer than fourteen successive Federal brigades charged the wall of Confederate fire. Not a single Federal soldier reached Longstreet's line.

On December 15, Burnside ordered his beaten army back across the Rappahannock.The Union had lost 13,000 soldiers in a battle in which the dreadful carnage was matched only by its futility. Federal morale plummeted, and Burnside was swiftly relieved of his command. By contrast, the morale of the Confederacy reached a peak. Their casualties had been considerably lighter than the Union's, totaling only 5,000. Lee's substantial victory at Fredericksburg, won with relative ease, increased the already buoyant confidence of the Army of Northern Virginia, which led subsequently to the invasion of the North the following summer.

Source: "The Atlas of the Civil War" by James M. McPherson