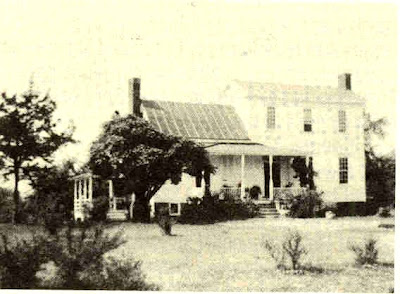 
The Dr. Jacob Thompson House in Leasburg, Caswell County, North Carolina, is a one and one-half story frame federal house of eccentric design, considerably altered. Originally two-story. It features extremely ornate trim includes pierced dentil cornice, window caps with geometric gougework and fluted corner blocks. Much of the interior trim has been sold, including the mantel with 23 stars which once was said to have been bought by the Winterthur Museum of American Decorative Arts. However, the mantel went to a private home in Martinsville, Virginia. 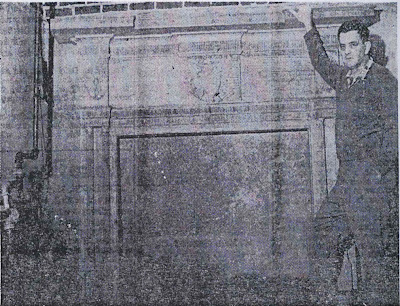 And, pictured above is the famous mantel and the person who purchased it and moved it to Martinsville, Virginia, William Henry Ham. William Henry Ham was a brother of Thomas Jones Ham, Jr., (1896-1967), long-time Yanceyville pharmacist and owner of the Yanceyville Drug Company (the drug store on the square in Yanceyville) who affectionately was called "Old Doc Ham."

The house from which the mantel and other items were removed purportedly was built by William Archer Lea. The next owner was Benjamin F. Stanfield. Whether this was the senior or junior Benjamin Franklin Stanfield is not known. Dr. Jacob A. Thompson was the next owner, and he lived there for some fifty years until his death. James Albert Wade was the next owner and apparently owned the property until it was sold at auction and purchased by William Henry Ham for purposes of removing the interior woodwork. 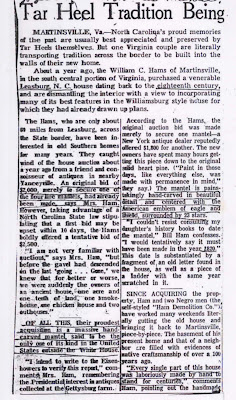 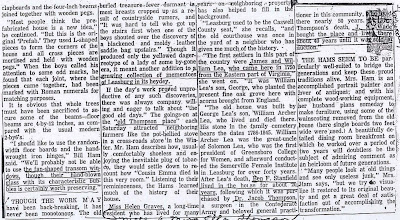 
Please be aware that the statements made by Helen Graves with respect to the Lea family should be considered very carefully. Many have confused the various members of the Lea family with the given names William, James, and John. Here are the troublesome excerpts:

The first settlers in this part of the country were James and William Lea, who came here in 1750 from the Eastern part of Virginia," she went on. "It was William Lea's son, George, who planted the present fine oak grove here with acorns brought from England.

The old house was built by George Lea's son, William Archer Lea, who lived and died there. His stone in the family cemetery bears the dates 1786-1845. William Archer Lea was the great uncle of Solomon Lea, who was the first president of Greensboro College for Women, and afterward conducted the Somerville Female Institute in Leasburg for over forty years. After Lea's death, Ben F. Stanfield lived in the house for about 20 years, following which it was purchased by Dr. Jacob Thompson, a surgeon in the Confederate Army and beloved general practioner in this community, who lived there nearly 50 years. After Thompson's death, J. A. Wade bought the place and lived there about 40 years until it was sold at auction.

She states that the first settlers in the Leasburg area were James and William Lea, who appeared on the scene in the 1850's. Yes, but which James Lea and which William Lea?


The two brothers who generally are considered as founders of the Leasburg area became known as James (Kigore's Branch) Lea and William (South Hico) Lea. This was in an attempt to differentiate them from the other members of the Lea family with the same given name. However, another William Lea moved from Virginia to the Orange-Caswell area in the 1850's. He became known as William (Cobb's Creek) Lea. While one is possible (and even likely), no family relationship has been established between this second William and the brothers James and William.

Helen Graves also states that William Archer Lea was the great uncle of Solomon Lea. This appears to be incorrect, and results from confusing the two William Leas. And, this connection suggests that the William Lea to whom she referred was William (South Hico) Lea.

Anness Lea did have a brother named George Lea, who was the great/grand uncle of Solomon Lea. However, ignoring the generational problems, no record has been found indicating that this George Lea (who moved to Georgia) had a son named William Archer Lea. Moreover, there is the record showing that the mother of William Archer Lea was Jane Douglas. No record has been found supporting a Jane Douglas as a wife of the George Lea who was the son of William (South Hico) Lea.

While not absolutely clear, the best evidence indicates the following ancestral outline:

Here is a photograph of the Dr. Jacob Thompson (or what remains of it) today: 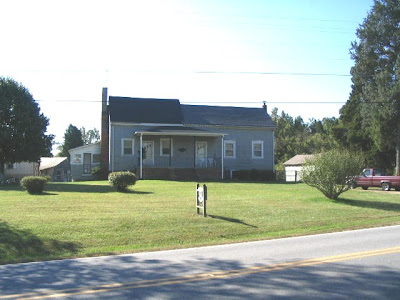 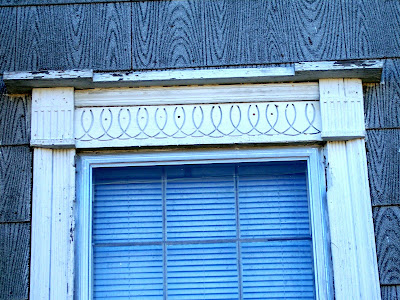