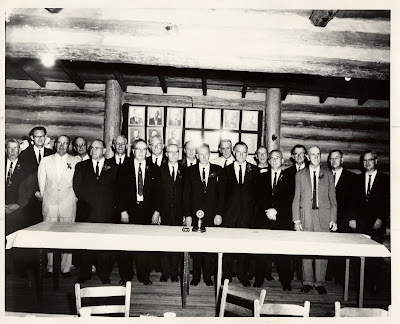 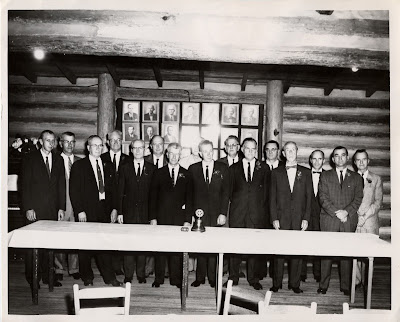 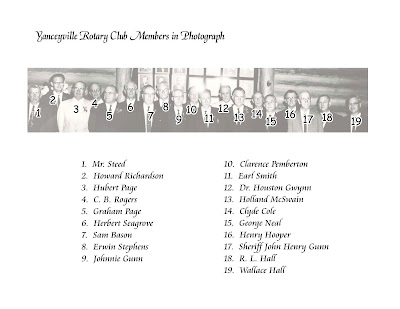 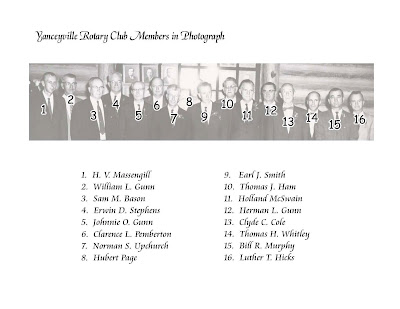 On May 7, 1937 thirty-two men from Caswell County saw a dream come true when the Yanceyville Rotary Club was officially formed. Sensing the need for an organization to promote the development and advancement of the Yanceyville community, these men turned to the high aims and achievements of Rotary International. In 1905 a few man in Chicago committed to the ideal of fellowship and cooperation in business began the first Rotary Club. Paul Harris, the founder of Rotary, initiated the procedure of selecting the leaders from various business and professional men to be members of that first Rotary Club. As early as 1936, a group of Yanceyville citizens formed an organization to develop and improve this community. Special committees were appointed to study the local situation and a compromised report was approved for the establishment of a Rotary Club with a special Industrial Committee to seek new industries for the town. The Yanceyville Rotary Club was organized on March 16, 1937, and through the sponsorship of the Burlington Rotary Club, the Yanceyville club was admitted to Membership in Rotary International on May 7, 1937. The charter members were:

The local club was incorporated with the Secretary of State, Thad Eure, on March 29, 1945, for the purpose of forming a non-stock no-capital corporation to conduct a recreation and community center for citizens of the county. The Caswell County Board of Commissioners on April 2, 1945 deeded 12.98 acres of land to the Yanceyville Rotary Club, Inc, for the sum of $500.00. This parcel of land contained a log building which was built in the 1930's with WPA funds.
_______________ 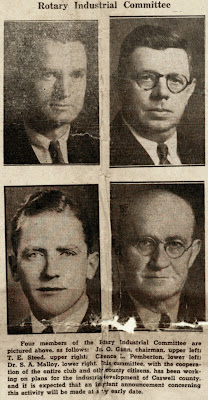 The Rotary Club of Yanceyville took the initiative to begin the industrialization of Caswell County. In 1938, when the club was just in its second year, an industrial committee was appointed under the chairmanship of John O. Gunn, and it reported some specific plans to the club. The result was the organization of the Caswell Development Company with Gunn, T. E. Steed, and S. A. Malloy as incorporators. When the company was organized C. C. Cole became president while T. E. Steed and Hubert H. Page were vice president and secretary-treasurer, respectively. An intensive campaign was begun to raise funds to construct an industrial building, and with the full cooperation of the Rotary Club and other citizens in the county a substantial sum of money was raised to begin construction. Additional money was borrowed and construction was completed very early in 1939 so that the Caswell Knitting Mill opened in late February. A. Glenn Holt of Burlington (Company Shops) had recommended this particular type of industry and he became the operator of the mill, which gave employment to around 150 people. This was a significant beginning and it was symbolic of the future.

For many more Rotary Club photographs go to the Caswell County Photograph Collection.
_______________

To our family, it was and always will be the "clubhouse". It was nearby, easily accessible, not far from our farm. We walked frequently to fish in the lake--in fact three of my sisters posed for the camera sitting on one of the wood railings of a fence that was at one time, around the water--as the photo was snapped, they fell backwards and got thoroughly dunked--winter coats and all. We visited with families that once lived in a little house to the left of the road leading to the clubhouse. We freely picked beautiful cattails and other flowers around the lake. There were girl scout activities there once, and other various functions. After my graduation in 1954, a party was given there for our class--the photos from it bring back poignant memories--we also had some wonderful class reunions there--the clubhouse was a link to the outside world for us as young children, other than just school, church, etc. Also, the residents of the prison camp close by raised a large garden each year. Back in the forties, they tilled the soil with a plow and a team of oxen--I remember that those horned beasts sort of scared me-they grazed around the clubhouse lake--in reality, they were as gentle as lambs...thanks for posting this nostalgic photo....
_______________

A dilapidated rural hangout - a hangover from a WPA failure - has been converted into a pleasant rural rendezvous through the work of the Yanceyville Rotary Club.

Yanceyville is a small, unincorporated county seat which traces much of its civic progress to the formation of its active Rotary Club 20 years ago. While the club takes justifiable pride in its record, it is proudest of its clubhouse, lake and "keeper's home," all of which are available to the community. They nestle in 13 acres of grounds, formerly part of the county poorhouse.

The WPA once tried to convert the area into a recreational center, but turned the property back to the county. The county lacked funds for maintenance and operation, and the area became an eyesore. Then Rotary stepped in.

The county commissioners offered the property to any worthwhile organization which would assume running expenses and the care. Individual Rotarians purchased the property on April 2, 1945, and donated it to the Yanceyville Rotary Club, in fee simple, "as long as water flows and grass grows." Rotarians restored the building, which included an entirely new roof, replaced hundreds of broken panes, planted a forest of loblolly pines where somebody had ruthlessly cut a boundary of age-old oaks, and cleaned up the badly cluttered surroundings. Incidentally, the rustic ceiling of the dining room has been appropriately adorned with two enormous wagon wheels, fitted with electric lights, the gift of an individual Rotarian.

The clubhouse is less than a mile from the village. It is built of large peeled pine logs, with a beautiful chimney of native stone, into which are masoned interior and exterior fireplaces. There is a dining which seats 96 comfortably, a kitchen, a broad stage and a spacious porch, overlooking the lake of several acres and a panorama of wild and entrancing scenery.

The Board of Directors of the Rotary Club has provided that the property and facilities can be used at any time by any wholesome organizations, such as all civic and county government bodies, Boy and Girl Scouts, 4-H Clubs, fraternal societies and lodges, schools and churches. It may be Rotary owned, but it is, also, a community and county enterprise.

My memories are of preparing and serving meals there [Yanceyville Rotary Club] to the men. Think it was the children’s choir that did this. My dad was a member so I was there on other occasions as well. Oh, and my music recital was there too. No bathroom and the outdoor potty. Yuck. While the moms were preparing the meal us kids would go to the lake and skip rocks and watch the ducks. Yes I well remember that place. Hope the new owners will do something good with it. A shame to just let it deteriorate. My mom wanted to see it again and we visited it the spring before she died.