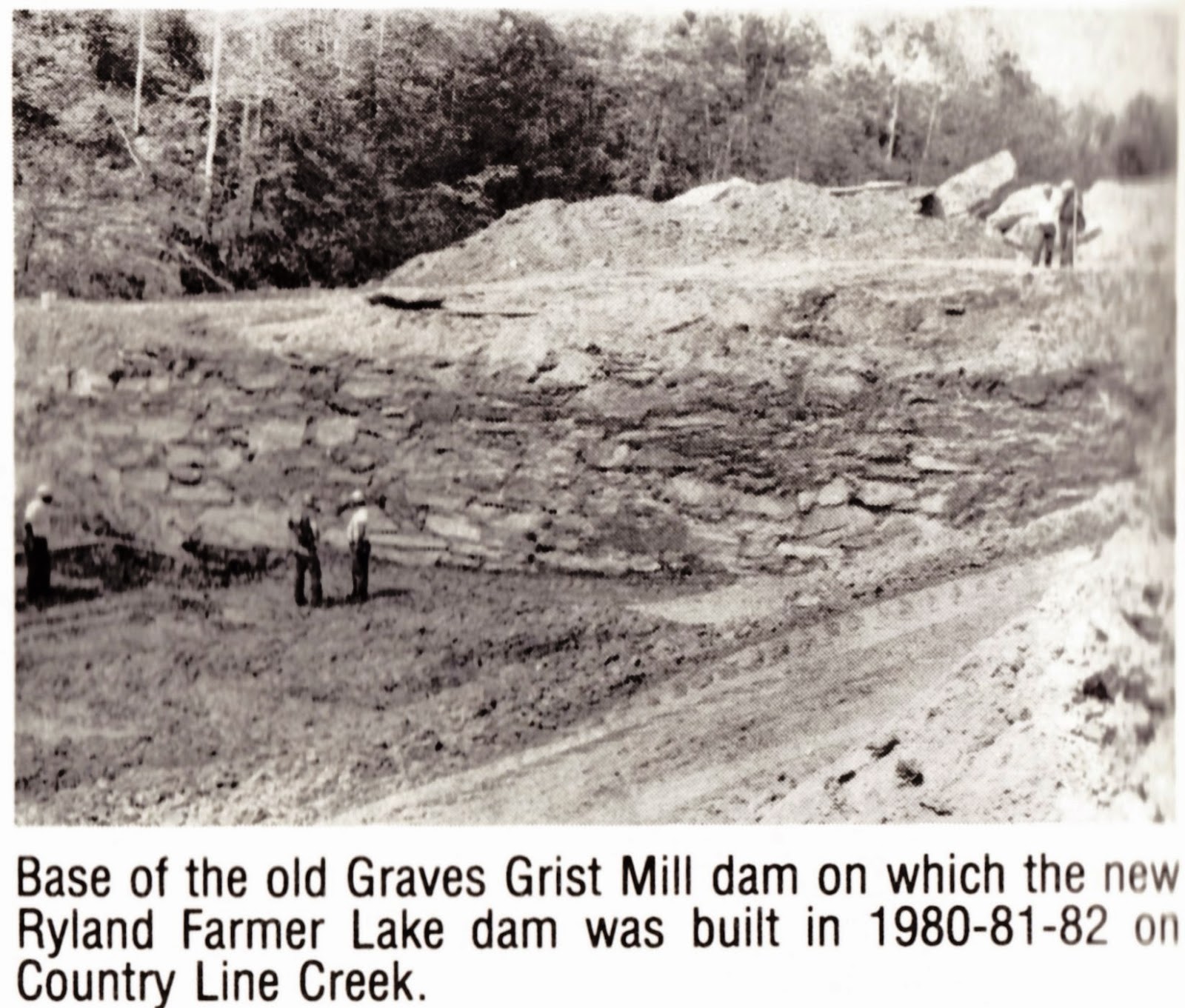 
"The rock dam remnant on Country Line Creek about two miles southwest of Yanceyville can be associated with the earliest settlement of Caswell County. Country Line Creek, from its origin in southeastern Rockingham County, dissects Caswell in a northeasterly direction. The creek appears in the records as a geographical location as early as 1752, and William S. Powell suggests that the stream " . . . was probably named from the eighteenth century custom of calling the North Carolina - Virginia line the 'country line,' as the two colonies were regarded as different countries. The fertile soil in the drainage basin, a plentiful water supply, and abundance of fish proved highly attractive to the early settlers of the area. Between January 18, 1752 and October 10, 1762, when Caswell was part of Orange County, 8,148 acres were patented along Country Line Creek. Among these early settlers came John Graves who erected a mill on the site under study perhaps more than a decade before the American Revolution."

This is the opening paragraph from A Brief History of Graves Mill: An Archaelogical Site on Country Line Creek, Caswell County, North Carolina, Jerry L. Cross (1982), which can be found at Graves Mill. If you have problems with the link to the Graves Mill document use the following URL:

The following is from the 1810 letter to the editor written by Bartlett Yancey, Jr.


This county was first settled about the year 1750; from that time until 1754 or 5, there were about 8 or 10 families in that part of the county, now known by the name of Caswell: A family by the name of Reynolds, and two others by the name of D[page edge worn] and Bankston were among the first settlers; not one of the family are now in county, and it is believed not one of their descendants: The Lea's, Graves', Patersons, & Kimbros came to this County about 1753, 54 & 55: they came from Orange and Culpepper in Virginia: Several hundred of there families and their descendants are now living in the County: The object of the first settlers, was to possess themselves of fertile land, and good pasture: I am told by the first settlers, that cane was so plenty, at that time, that their cattle [smudged] fat all thru winter without feeding:

Note that he states that the Graves family was one of the early settlers of Caswell County. This was the family of John Graves (1715-1792), who married Isabella Lea (1738-aft.1796). The Leas and Graves did not, however, relocated from either Orange or Culpepper in Virginia. They moved to Caswell County from Spotsylvania County, Virginia, during the 1850s (probably 1854). John Graves accumulated considerable land holdings, much of which was along Country Line Creek, which generally runs from the southwest portion of Caswell County to its northeast corner where it empties into the Dan River at Milton, North Carolina.

While the above-referenced history of Graves Mill is interesting with respect to the mill's establishment, location, and operation, some of the Graves genealogy appears erroneous (and part of the chain of mill ownership is questionable).

Author Jerry L. Cross concludes that Laura A. Graves (c.1827-1879), who purportedly once owned the mill, is the sister of the William B. Graves (1827-1894), who eventually owned the mill. This is incorrect. She is Laura A. Willis, daughter of Anderson Henry Willis (1800-1880) and Frances B. Rice (1807-1850). Her first husband apparently was a John K. Graves, and her second husband was James W. Henry. The John K. Graves may be John Kerr Graves, son of General Barzillai Graves (1782-1850) and Frances Williams (died April 1818). This has not, however, been confirmed, and researchers are warned to proceed with caution in this area and not to repeat this possible marital relationship without providing primary-source documentation.

However, the will of Reverend Barzillai Graves, written 1827, makes no mention of a mill. However, the 1827 will of his brother Captain John Herndon Graves does refer to a mill:

Abstract of will of John Herndon Graves [referred to as John Graves, Sen.]:

"462 John Graves Sen. -- Will -- written 9 Jan 1826. Wife Elizabeth to have mansion house and plantation from mouth of Meeting House branch to spring to road to Caswell Court House to Fuller's Branch to the creek for her lifetime. Wife to have furniture which she had before their marriage. Daughter Polly Graves (land whereon I live inc mill which was purchased of son Barzillai Graves, 412 acres, and joint use of mansion house whereon I reside."

While uncertain, here is a possible chain of Graves Mill ownership:

Permalink
Posted by RSF at 2:00 PM