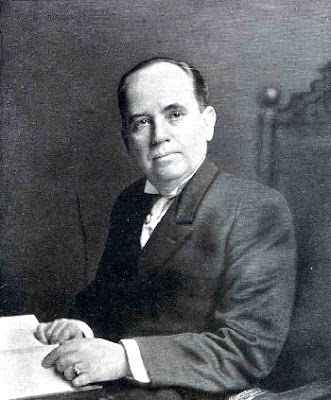 William Louis Poteat was born in Caswell County, North Carolina, in 1856. He graduated from Wake Forest College with the A.B. degree in 1877, and received the A.M. degree in 1889. He received LL.D. degrees from Baylor, North Carolina, Brown, and Duke; and the Litt.D. degree from Mercer. He engaged in postgraduate studies at Marine Biology Laboratory and University of Berlin. He married Emma J. Purefoy of Wake Forest in 1881 and had three children.

President Taylor was succeeded by Dr. William Louis Poteat of the Department of Biology. Affectionately known as "Dr. Billy" to a host of students during his twenty-two year administration, he continued to promote the general growth of all areas of the College. Special emphasis was placed on development in the area of sciences, reflecting in part the interests of the President and also in part the need to enrich the premedical training required by the new School of Medicine.

As student enrollment increased from 313 in 1905 to 742 in 1927, there was a corresponding increase in the size of the faculty. Increased registration in religion, English, education, and social sciences required more administrative direction, and a Dean and a Registrar as well as Librarians were employed. Expansion of physical facilities included science laboratories, two new dormitories, an athletic field, a heating plant and an infirmary. Wake Forest, joining the trend of the other colleges in the state, gave more attention to sports and achieved an envied reputation in baseball and football.

Notable also during President Poteat's administration was the continued growth of the endowment. Through the efforts of Professor John B. Carlyle $117,000 was added, one-fourth of which was contributed by the General Education Board of New York. Later a gift of $100,000 in Duke Power Company stock was received from Benjamin N. Duke, and $458,000 from the Southern Baptist Convention.

Beyond these significant material advances, President Poteat brought another distinction in the form of state and national recognition. A devout Christian, an eloquent speaker, an accomplished scholar, he became a state-wide leader in education and probably the foremost Baptist layman in the state. As a distinguished scientist he was among the first to introduce the theory of evolution to his biology classes. His Christian commitment in his personal and public life enabled him to successfully defend his views on evolution before the Baptist State Convention in 1924. This was considered a major victory for academic freedom and attracted national attention. Due in part to his influence and that of the Wake Forest alumni who supported his view, the Legislature of North Carolina did not follow other Southern states in the passage of anti-evolution laws in the 1920's.

Permalink
Posted by RSF at 2:09 PM