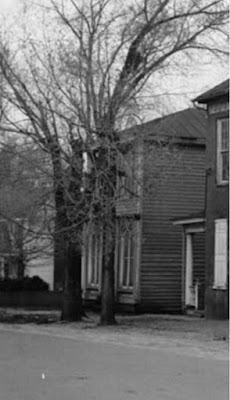 The two  houses east of the Union Tavern/Thomas Day House in Milton, Caswell County, North Carolina, have been confusing. The one that remains generally is called the Friou-Hurdle House.

The house that no longer stands has been referred to as:

Otto Howard Salzman (1841-1916): Jeweler in Milton, North Carolina c.1880. Note that a building that housed Salzman Jewelry once stood in Milton -- on the south side of Broad Street between the Union Tavern and the Friou House. Apparently the Milton Town Hall also once stood on the same site (or was the same building).

Note that Otto Howard Salzman married Fannie Malinda Hines (1842-1979), daughter of prominent Milton tailor Benjamin Hines (1808-1887). Census records (1880) indicate that Otto and his three daughters lived in the Benjamin Hines household (see below). Thus, it is possible the building that no longer stands was just used as the Salzman jewelry business and not as a residence.

But, this is not a certainty. Fannie Hines Salzman died in 1879 as a result of giving birth to her third child: Josephine Salzman. Thus, it is possible that Otto Salzman moved his remaining family (three young daughters) to live with his father-in-law. While the mother-in-law had died, remaining in the Hines household at the time of the 1880  US Census were two unmarried sisters of the deceased Fannie Hines Salzman. They could have assisted with the three Salzman daughters.

The 1870 US Census is not instructive as Otto and Fannie were married in 1872. Otto Salzman arrived in the US from Hamburg, Germany, 27 June 1865. At some point after Fannie died Otto apparently moved to Danville, Virginia, where he owned and operated a retail jewelry business. He died 1816 and rests at Green Hill Cemetery (Danville, Virginia). Otto apparently was Swiss, which is appropriate for a jeweler.

Of interest is the mother of Fannie Malinda Hines Salzman: Sarah Price Holder (1810-1853). Yes, she is the daughter of the James Holder (1774-1836) who built the Holder House now owned by Danny and Kimberly Cash!