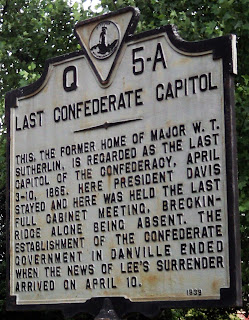 Not Last Confederate Capitol Nor Capital

This historical marker, erected in 1939 on the grounds of the Sutherlin Mansion in Danville, Virginia, incorrectly claims the former home of Major W. T. Sutherlin is "regarded" as the last capitol of the Confederacy. At least serious historians do not "regard" it as such.

It appears that CSA President Jefferson Davis did stay there, but it was not the site of the last "full cabinet meeting."

While Jefferson Davis "roomed" at the Sutherlin Mansion, it appears that the last meeting with his cabinet did not occur there:

"The final Confederate Cabinet meeting was held at the Benedict House (since destroyed) in Danville."

"The executive offices for the president, the secretary of state and, I believe, some other departments of the government had by this time been established in a large brick building on Wilson Street."

This is a statement by William Pinkney Graves describing his return to Danville to report that Lee had surrendered.

Thus, the executive offices of the so-called last capitol of the Confederacy were not at the Sutherlin Mansion. It appears that the only connection the Sutherlin Mansion had to the "last capitol" was that CSA President Jefferson Davis slept there. The CSA executive offices were elsewhere, members of the cabinet slept elsewhere, and the last meeting of the CSA cabinet in Danville was elsewhere.

So, how can the Sutherlin Mansion fairly be described as the "last capitol of the Confederacy"? It cannot. 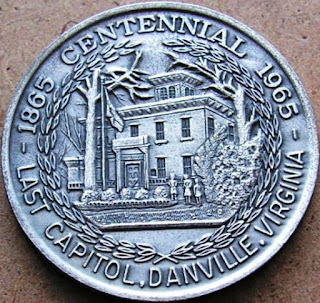 Note the reservation in the marker: "regarded" as the last capitol of the confederacy.

Note the reservation as to the absence of a cabinet member. 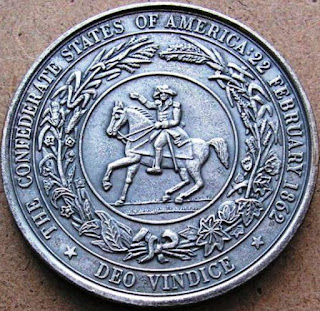 Note also the last sentence: "The establishment of the confederate government in Danville ended when the news of Lee's surrender arrived on April 10." It does not claim there was not another "establishment." It only states that the "confederate government in Danville ended." Of course, President Jefferson Davis took his "government" to Greensboro, North Carolina, and then on to Charlotte, North Carolina, which legitimately can claim to be the last capital/capitol of the Confederacy.

"At Charlotte: On April 26, at the residence of Maj. William F. Phifer, where Secretary Trenholm was confined by illness, all the members of the Cabinet were in attendance, and the last formal Cabinet meeting was held. The end had come."

Ballard, Michael B. A Long Shadow: Jefferson Davis and the Final Days of the Confederacy (1986).

Davis, Jefferson. The Rise and Fall of the Confederate Government (1881).

Last Days of the Confederacy: Greensboro and Charlotte, North Carolina

"The Confederate States of America boasted five capital cities in four years. The center of the Confederate government moved from one Southern city to another, including Montgomery, Richmond, Danville, Greensboro and Charlotte. From the heady early days of the new country to the dismal last hours of a transient government, each city played a role in the Confederate story. While some of these sites are commemorated with impressive monuments and museums, others offer scant evidence of their importance in Civil War history. Join award-winning historian Michael C. Hardy as he recounts the harrowing history of the capitals of the Confederacy."

"Around 3:30 P.M. that Monday, Captain William P. Graves reached Danville after an all-night ride from Appomattox. He was the first person to bring positive word of Lee's capitulation. Micajah H. Clark, President Davis' [sic] confidential secretary, observed that news of the surrender 'came with the paralyzing shock of a sudden earthquake' (Confederate Veteran, VI [1898], 293). How Danvillians and their guests reacted to the announcement is most graphically described in ibid, XXXIV (1926), 451; Danville Register, January 22, 1939; Myrta Lockett Avery, Dixie after the War (New York, 1906), p.51."