It appears the Maury family was fleeing Richmond, Virginia, during the Civil War. Note the interesting description of Milton and the Donoho family.

If the Maury family took one of the last trains from Richmond this would have been early 1865 on the Danville and Richmond Railroad.

It appears the author of the letter referenced (and published on pages we do not have) already was in Milton, Caswell County, North Carolina, as early as July 16, 1863..

Charles Walker Maury (1857-1910) is a son of William Lewis Maury and Ann Fontaine. An image of Charles Walker (Charlie) Maury is in the book. He married Emily Louise Flanders, and the couple apparently had two daughters: Annie Fontaine Maury (author of the book); and Virginia Maury. 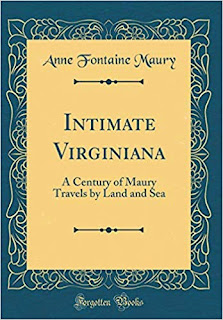 Anne Fontaine Maury was the president of her senior class and very active in a variety of student activities, especially dramatics. After graduation, Miss Maury attended a school of social work, did some editing, and later wrote a history of the Maury family titled Intimate Virginiana, before becoming a real estate agent.

The author of the book is the granddaughter of William Lewis Maury and Anne Fontaine. Their son, Charlie, pictured in the book, was the author’s father. William Maury’s daughter, Jane, by his first wife, who died young, married George Richmond, son of Caleb Richmond, Woodside. William Maury came to pick up his family in Milton, and they went by boat to the Barksdale Train Station. I have a First Edition copy of this book. It’s a treasure. William Lewis Maury’s sword sold in recent years at auction for over $155,000. Mary Hill Beckham, d. 1850, was the first wife of Captain Lewis. Today there is a Maury-Fontaine Society. 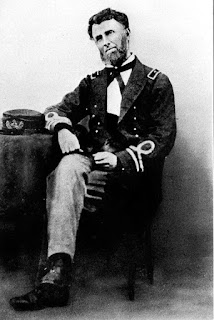 Captain William Lewis Maury (1813-1878). Sent his family to Milton, North Carolina, for safety during the waning days of the Civil War. Possibly Petersburg had fallen and Richmond was in danger.
_______________

William Lewis Maury (1813-1878) was born in Virginia, the son of William Grymes Maury and Ann Hoomes Woolfolk, and became a midshipman in the United States Navy in 1829. Maury served in the United States Naval Observatory under his cousin, superintendent Matthew Fontaine Maury; in charting the seas, cartography, and in recording astronomical observations.

In the famed United States Exploring Expedition then Lieutenant Maury served under Charles Wilkes from 1838-1842. He served on the ships Vincennes; joined the Peacock at Orange Bay, and the Porpoise at Callao.

It was during the Exploring Expedition's survey of Puget Sound that Commodore Wilkes named Maury Island after William Lewis Maury. Maury continued in Navy service serving on the Navy Efficiency Board. In 1860 he served as a member of the Japanese Treaty Commission.

When the American Civil War began he resigned his commission and joined the Confederate States Navy. He was initially assigned to a coastal defense battery at Sewell's Point, Virginia. His talent for coastline defense was recognized early on and he was reassigned to the Confederate Torpedo Service. Serving first at Wilmington Station and Charlotte, North Carolina, he was soon transferred to Charleston Station. Later, as commander of the ship CSS Georgia, a commerce raider, he captured and sank several ships carrying war materials while letting others with commerce not for war go free.

Our assumption about the "last trains" from Richmond being in early 1865 may be incorrect. It appears that not only was Anne Fontaine Maury in Milton way before one of the "last trains," she may have given birth in Milton to Leonard Turner Maury in 1863. The family remained in Milton until at least 15 August 1865 when she gave birth there to son Rutson Maury (became a medical doctor and died young from pneumonia).
_______________

After Captain William Lewis Maury died in 1878, his widow and her children were found at the time of the 1880 US Federal Census living with his brother, Rutson Maury (cotton merchant) in New York, NY.