Caswell County Reign of Terror in 1872 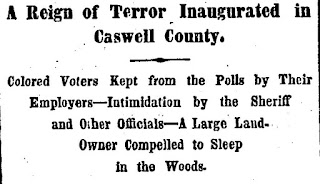 A Reign of Terror Inaugurated in Caswell County

Colored Voters Kept from the Polls by Their Employers -- Intimidation by the Sheriff and Other Officials -- A Large Land-Owner Compelled to Sleep in the Woods.

Danville, Va., Aug. 11. -- A meeting of Caswell County, North Carolina, Republicans was held, last evening, in an old log hut on the edge of the woods outside of Yanceyville. Between forty and fifty persons were present, George Williamson, a white man, tried to raise a disturbance in the town, and by the false rumors he spread made many of the negroes afraid to attend. Thomas J. Foster, Representative elect, was in the chair. A resident of Leesburg [sic] reported that William Long would not let his hands leave work on the day of election. The threats he used prevented fifteen from going to the polls. From Milton Township it was reported that John Lea also intimidated his workmen, causing a loss of ten Republican votes.

About noon, Sheriff Griffith arrested John Mitchell, colored, on the ground that he was a resident of Virginia. Evidence was produced that he was a legal voter in Milton, but the Sheriff tied him with a rope in front of the hotel and swore at him, and so frightened the negroes in the streets that most of them went home without voting. Soon after the same official arrested another negro on the affidavit of Yarborough [sic], his former owner, that he was under twenty-one years of age. His mother, who was in Yanceyville yesterday, says that he is in his twenty-fourth year. Both these men were lodged in jail, but the former has been since liberated on giving $100 bail.


At Yanceyville, William Leith, colored, reported that the white judges of election insisted on the colored voters putting their ballots in the boxes themselves, instead of giving them to the inspectors to deposit; and when he was directing them how to do it, James Williamson threatened to put him in the Penitentiary. Ballots deposited in the wrong box are not counted. George W. Bowe stated to the meeting that he knew seven residents of Yanceyville who were not allowed to vote.

There was a rumor from Leesburg [sic] that thirty men omitted to vote. They were driven from the polls because they had been working in Virginia, a few miles off, but positive information could not be obtained on that point.

In Dan River township over forty Republicans were kept from the polls by the removal of a boat from one bank of the river to the other, and there securing and locking it up. Not one of them could get across. The vote of every colored man in Yanceyville was challenged.

No definite action was taken by the meeting. After it adjourned I went to the house of a colored resident of Yanceyville for further information. He was afraid to admit me, and I was interviewing him from the sidewalk, when a man on horseback, who had been waiting in a turn of the road, came and joined us. He looked over my note-book, interrupted the conversation, and repeatedly asked the negro to go away with him. A reign of terror seems to have been inaugurated in Caswell.

Mr. Foster, Chairman of the meeting, is a white man, and a large land-owner in that part of the State of which he is a native. He told me that, fearing an attack on his residence, he had often been compelled to sleep out in the woods.
_______________