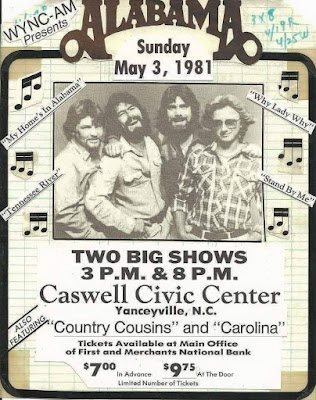 On Sunday, 3 May 1981, the musical group "Alabama" gave two performances at the Caswell County Civic Center in Yanceyville, North Carolina.

Below are memories of that event posted to the Facebook Page of the Caswell County Historical Association in September 2019:

"I think they won a big award that weekend. They laughed and said that we were getting their last performance for a fee that small. Our CC Chamber lucked up on that one." Katherine Finch Watlington

"I was working the civic center that day. Got to hang out with them. The country cousins opened up for them. They had just won their first big award. Randy was a little distant. I later found out his dad had just passed away and he couldn't attend the funeral because of commitments with the newly found fame. He did both shows just like there was nothing wrong." Gregory Kyle Solomon

"I was working for the band then. The story you just told was a very big deal to Randy. I had forgotten about that." Kevin P. O'Keefe

"I was there. Small audience..... afterwards you could go talk to them like they were your next door neighbor. Spring 1981." Nancy Fowlkes Dailey

"I was there. I think it was 1981 and their wives were in the lobby selling tapes and t-shirts." Jane Poteat

"They also played st the Camp Springs Bluegrass Park in the early 80s. Lee Greenwood was there too and they put on a great show!! I was there!" Judy Mansfield Smith Jenkins

"My wife and I were there..Definitely early 80’s.I remember a very young girl gave the band a poster she made for them.Then a few months later during the Country Music Award Show Alabama won a Award and they had the poster from the young girl at the award show..." Tim Smith

"My younger brother was with us and we walked by the buses, Randy and Ted were pitching a baseball back and forwards to each other. Randy missed and my brother got the ball and gave it to him, this was before the show. I really thought that Lee Greenwood did better than they show wise but they were great!" Judy Mansfield Smith Jenkins

"I remember the venue was unusually small for AL at that time. It was a personal favor for a friend that recruited events for the CCCC. It was told up front it would be the first and last time they appeared there. A favor paid up in full. My step-father Richmond S. Frederick, Sr. told me this." Steven Dale Broome
Posted by RSF at 3:01 PM