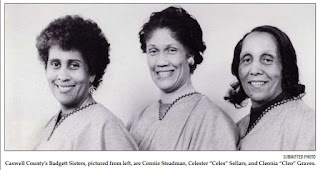 Internationally acclaimed singer Celester "Celes" Badgett Sellars of Caswell County passed under the care of her son Stanley in Alexandria, Va., on Monday, Oct. 1 at the age of 85, but in her family, the music must go on and her youngest sister Connie Badgett Steadman is set to release an album by the end of the year. The women, with a third sister, Cleo Badgett Graves, were best known as the African American gospel trio the Badgett Sisters, who performed from 1978 to 1991 when Graves passed. The sisters had sang all their lives and were apart of a musical family of four brothers and four sisters, orchestrated by their prodigy father Cortelyou Odell Badgett Sr., who started each of the siblings singing a cappella at the age of 5.

"In the tradition of the Baptist church back then, when a child reached the age of 12, if they weren’t members of the church, they couldn’t participate in church activities," said Steadman. “The group was my dad, Cleo, an older brother Rick, and an older sister Ella. When Ella turned 16, she no longer wanted to be apart of the group and I was five and had been around them all the while and knew the songs so dad put me in to sing. When my brother turned 12, since my father didn’t want to do wrong with the church and Rick wasn't a part of the church, that was when my sister Celes started singing with us. That's how it was with our father. So from that point on, it was my dad and the three of us."

The father could play any instrument, said Steadman, and he had a range of voices so distinct and pure that those that listened to his recordings refused to believe it was just one man singing. In Steadman's upcoming album, she plans to sing the parts of her sisters in overlay to pay homage to her father. "This album is something meant for me to do," she said. "My mom was the storyteller in the family and my dad was the singer. As time went on, we always incorporated both a story and a song into our performances. Celester was the storyteller, but since her passing, I've incorporated the whole thing. I'll continue the tradition on my own with the same storytelling format," she said.

The album is a back and forth of stories, poems, and songs. The group has been internationally recognized and recorded for their folk tales, she said. "The Path That Leads Home" is the album's title, named after a song Steadman wrote but never published. Around 2006, Sellars considered taking a break from singing and Steadman's son agreed to continue the tradition, but before they could, he passed. The sisters sang a last time at his funeral. Later, when searching her drawers for his favorite song, Jacob's Ladder, she found her words to The Path That Leads Home. The album is produced in part by efforts of Glenn Hinson, a UNC Chapel Hill folklore professor, who was instrumental in bringing the group to fame in the late 70s.

"Before Glenn, really, we never sang outside the church, except for family gatherings. When Glenn came, he started bringing us to festivals and we branched out. We didn't care about being anybody, we just sang. We just got together and we sang," said Steadman. "Caswell County has always been supportive of us. Even when we worked here, our supervisors never hesitated to approve our leave, because we would perform at Carnegie Hall, N.Y.; Australia in 1993; a national tour of 11 states in 1986 (Caswell to Florida to Chicago to New York and everything in between)," she said. Working in Caswell County is how Hinson discovered the trio. "He came to Yanceyville, to find someone who could make traditional ash cakes for this folk festival, an annual river festival in Durham. Someone told him about my sister Cleo because she worked at the Agricultural Extension Office. When he got here and was asking about finding her, people told him, 'You don't want her to make ash cakes. You want her to sing!' He didn't know anything about us singing, so he met with us at the house, and my dad was living back then. My dad, he said to forget about the ash cakes and get recording," said Steadman Hinson was apart of a project for an arts council at the time, recording different folk sounds and the Badgett Sisters represented as aspect of the African American South in North Carolina.

"We were supposed to meet up with dad to hear us record, but he died two weeks later. We said, 'Well he wanted us to do this, so we'll continue on.' And that's how we got involved with Glenn. We became the Badgett Sisters. Then Cleo passed in 1991, but my dad always wanted us to keep going, so we kept the tradition going. And now Celes is gone, and I continue on my own, still with Glenn," said Steadman. "Celes' voice was heavy; Cleo's was a little lighter; and mine was even higher. The best sound came when I was doing alto and they were switching lead and tenor. So that's how we remained until Cleo passed. Then I would lead and she would do tenor or she would lead and I would do my alto," she said. "I miss the harmony. I missed the voices. So, when I went to the studio for this new CD, I said I wanted two of my daddy's voices. And I did three of my voices. I really just wanted to be with him. Out of all those years singing together, I don't have anything of my dad singing with us, except one little recording I did during Christmas one year when I was 16. You know how you take things for granted? All those years and nothing (else) recorded, but every Christmas I'm so glad I have that one recording and I take it out and play it. It's just a little part of Silent Night, Traveling Shoes, and one other song. But just think, if I hadn't done that little thing, I wouldn't have had anything with us," she said.

The album will have a 24-page booklet that explains the stories and background on each of the songs. It'll include pictures of their past also. "Dad, he said, 'If it's not scripture, then don't sing it.' He said, 'Even if people don't want to hear it, don't change it, because down the road nobody else is gonna do it, and they'll want it.' And it was all true," said Steadman. A release date will be announced later this year for the new album and the Caswell Senior Center has already agreed to receive her, she said. To shortly follow the release will be a video biographic from Sony Music UK and digital remastering of the original three Badgett Sisters albums by another production company.

Before passing, Celes requested that she didn't want any kind of service. She was born Sept. 2, 1933. Cleo passed in December, 1991. On Oct. 6, Yanceyville Mayor Alvin foster said, "It is with great regret that I must announce this, Celes Badgett Sellars who was one of the Badgett Sisters of Caswell County, passed away last weekend. They were a great musical talent from Caswell County with a distinctive sound and style. They were all born on Old Hwy. 62, now known as Badgett Sisters Parkway."
Posted by RSF at 5:04 PM