This property is bounded:

2. Generally to the west by The Caswell Messenger building;

3. Generally to the south by the Azariah Graves storehouse building (home of various restaurants);

4. Generally to the southwest by a portion of the building that now houses Caswell Insurance (once the library, Dr. Houston Gwynn's office, etc.); and

5. Generally to the east by the Yanceyville Drug Store building.

Here is the deed. Click to see a larger image. 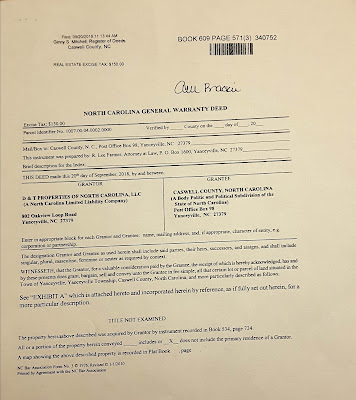 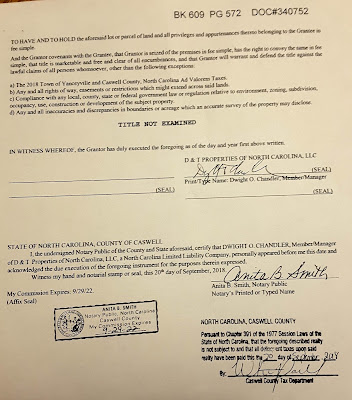 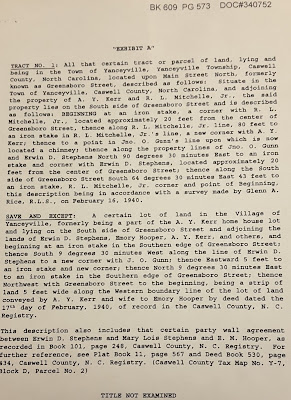 Complicating an understanding of the parcel description in the "Exhibit A," which apparently relies upon a 1940 survey, is the configuration of the buildings at the time. Still standing was the brick Hooper building (store on first floor/Masonic Lodge on second floor), the McAdams Electric building (older wood frame building on the steps of which which men of the town congregated), the W&W Grocery building, etc. Moreover, there was a vacant area behind the Hooper building (with concrete pad remaining and greatly enjoyed by roller skaters in the 1950s).
_______________

The A. Y. Kerr mentioned is Albert Yancey Kerr (1878-1942). He owned the Azariah Graves storehouse building (home to various restaurants in more modern times) immediately south of the subject parcel. At one time, Albert Yancey Kerr printed "The Caswell News" newspaper in this building (which he purchased for $300 in 1906).

The Jno. O. Gunn mentioned is John Oliver (Johnny) Gunn (1892-1992) (upon whose line was then located a chimney). Query what happened to the structure with respect to which only a chimney remained.

The Emory M. Hooper mentioned may be Emery McCormick Hooper (1913-1994). While better known as a farmer in Caswell County's Prospect Hill community, he may have owned property in Yanceyville.

Here is the earlier article:

Another item, previously agreed to be paid for in the amount of $300,000, is a business incubator to take home in the former drug store on Court Square. [County Manager Bryan] Miller said surveys from paid for consultants and citizen input alike point in the direction of such a facility that will boast competitive internet speeds and office space for developing start-ups and conferencing options that will attract larger businesses from outside the area. Chairman Nate Hall said he looked forward to hearing new progress on the project.