The nearby town of Yanceyville, N.C., is to receive, as a gracious gift, its first fire engine tomorrow morning, and the historic old town is preparing to whoop things up.

It all came about this way:

Danville is commissioning a new fire engine to replace an old 750-gallons-per-minute pumper which has done service since 1922. When the time came to trade, the value allowed on the old machine was only $100.

City Councilman D. W. Swicegood, chairman of the public works committee and who has a lot of sentiment for Caswell county, did some quick thinking and some close figuring. It would end up by his buying the old fire engine back from the manufacturing company out of his own pocket. He had the engineer to tune it up, had it repainted with the legend "Yanceyville Fire Department" and offered it to the town fathers as a gift with no strings tied.

Yanceyville accepted it without more than a minute's delay for it has recently installed a water system with fire hydrants and everything. Yanceyville bought 500 feet of hose and recruited a fire brigade. Housing for the engine near the town square was quickly secured and the deal was finished in no time.

Tomorrow Mr. Swicegood, Fire Chief John Long and Larry Lavell, engineer here from the Elmira, N. Y. factory, will carry the new engine to Yanceyville and will see that it is delivered. Mr. Lavell will post the new crew on the operation of the machine.

Presentation of the reconditioned engine which cost Mr. Swicegood a sum which has not been revealed, is expected to result in a material reduction in the Yanceyville fire insurance rates.

A Timely Gift To Old Caswell

This is the old city fire engine which has been purchased privately by City Councilman D. W. Swicegood, reconditioned and which is being given to the town of Yanceyville tomorrow.

The hood is off because the new gilt lettering "Yanceyville Fire Department" was not dry when the picture was taken. J. J. Mansfield, veteran Danville fireman poses at the wheel and Fire Chief John Long, who will go with the engine for presentation to Yanceyville tomorrow stands at the right.
_______________ 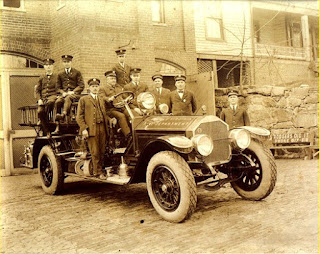