Asa Thomas of Caswell County to the Commissioners empowered to lay out the Town of Milton, for $5, land adjacent to Milton, three lots containing four springs for free use of water to inhabitants of Milton forever and to be reserved as the Town Common; lot #1 of 53 square chains and one spring; lot #2 of one acre and two springs; lot #3 of 1.75 acres [presumably with one spring]. 8 July 1797. Witnesses: James Rainey, L. Lea, Robert Wilson.

This Indenture made the Eighth day of July in the year of our Lord one thousand and seven hundred and ninety seven and in the twenty second year of our Independence between Asa Thomas of the County of Caswell and State of North Carolina of the one part and Thomas Jeffreys, Archibald Murphey, William Rainey, Archibald Samuel and James Saunders, Commissioners appointed by an act of our General Assembly for the purposes of laying out, building and carrying on the town of Milton near the mouth of Country line creek, all of the County of Caswell & state aforesaid of the other part.

That he given and granted bargained and sold and by this agreement doth give and grant bargain and sell, allieve in fee assess release and confirm unto the said commissioners and their successors for ever three certain lots or parcels of land situate lying and being in the Countyy aforesaid adjoining the Town of Milton it being three separate lots including four several springs, conveyed to the said Commissioners for the free and uninterrupted use of water to the inhabitants of the Town of Milton and by the said Commissioners to be reserved a Town common for that special purpose for ever and bounded as follows to wit,

And the said Asa Thomasfor himself, his _____  Exec - and administrators doth covenant and grant to ___ ___ the said commissioners and their successors for ever for the special purposes aforesaid by these presents that all and every other person of persons and his or their heirs anything having or claiming in the said premises above mentioned or any part thereof by from or under him them or any of them shall and will warrant and fore ever defend ________ by these presents.

In witness where of the said Asa Thomas hath hereunto set his hand and affixed his seal the day and year ____ above written.

Signed  Sealed & Delivered
In Presence of 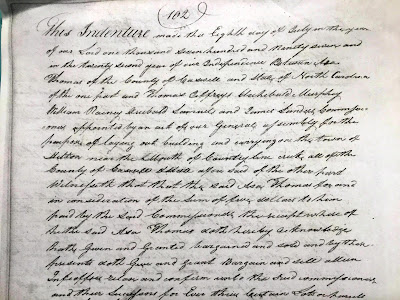 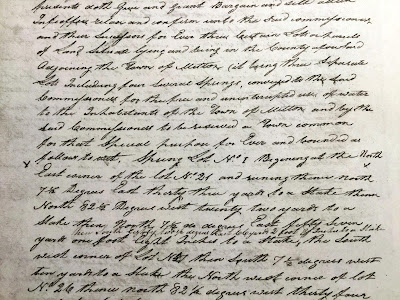 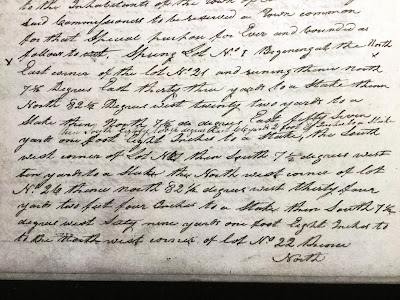 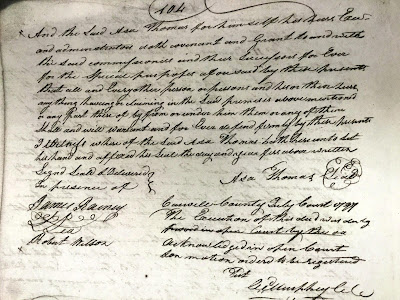