"The Legend of Sally Garland" 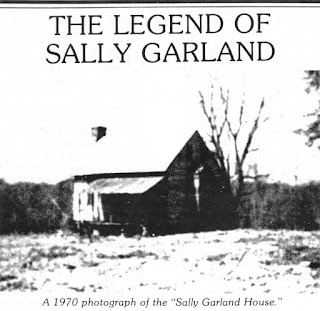 "The Legend of Sally Garland"

On a lost road that went from the Old Rock Academy, crossed John's Branch and Hogan's Creek, and ended at Lick Fork church in Ruffin, stand the ruins of what has come to be known as the Sally Garland House. Tales of murder and the intrigue of buried treasure drew people to the house for many years.

After Garland Blackwell's death, Sarah "Sally" Blackwell, who came to be known as Sally Garland, lived with a young slave girl in the house. This was probably the girl Margaret, who, along with a young boy named Bash, were willed to Sally, as noted in Garland's will, probated in April 1855.

According to the legend, Sally and the young Margaret were in the house alone one evening when they heard a scratching at the door. Upon hearing this, Sally asked the girl to let the cat in. When the girl opened the door, there was no cat, but rather a black man stood in the doorway. The sight of the man frightened the girl and she hid behind the door. The man entered the house and struck Sally with such force that the girl thought he had killed her. At this, the girl panicked and ran without getting a good look at Sally's assailant. According to one report, "He searched the house and punched the old lady's eyes out." Little Margaret had summoned neighbors, who found Sally alive, but she never regained consciousness and died a short time later. The girl named a man living on the farm as the assailant, but nothing could be proven, and no one was prosecuted for her murder.

Rumor had it that silver and paper money might have been hidden in the old house during the Civil War. Over the years people who heard the stories about the house ransacked it, tearing out walls and floors, the hearth, and digging in the basement. The "hidden treasure" has never been found, or at least never reported, and the mystery surrounding Sally Garland and her murder remains unsolved today.