"This memorial is erected by the citizens of Caswell County with pride and grateful appreciation for the services of the Caswell boys who made the supreme sacrifice in the World War." M.K.S. 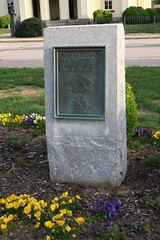 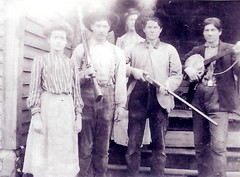 Second Photograph: Benjamin Franklin Brooks is to the right of his sister Mary Fannie Brooks.
_______________

Benjamin Franklin Brooks, a Caswell County soldier who was destined to lose his life in the service of his country, enrolled his name in the ranks of the National Army in the registration of 1918. He attained his twenty-first birthday just a short time before this registration was held. His father, Sam Brooks, married Miss Long, both of these parents being natives of Person County. Young Brooks saw the light of day in that County. This family moved to Caswell several years ago and set up their home in Hightowers Township. Young Brooks received the usual education to be obtained in the Public schools, and at the time of his registration was actively engaged in farming.

On August 5, 1918, he answered the call of his Local Board and was sent to Camp Wadsworth for training. He was given an Infantry assignment, and his comrades tell us that he developed into a very high type of a soldier. In the early days of October 1918 of World War I, he was sent overseas; sailing from Newport News, Virginia, and landing at St. Nazaire. During the voyage across the Atlantic, Jack became ill. His illness developed into pneumonia, and three days after he landed on French soil, he died. Jack was buried with military honors in the Military Cemetery at St. Nazaire, France. This soldier of freedom made the supreme sacrifice. All that is mortal of him remains in a foreign land, but his spirit still abides with us, and through years to come let us hold in reverence the sacrifice of this man.

God in his mercy and in His unfailing love willed it that but few of the sons of Caswell, should sleep their last dreamless sleep in the land where the Poppies grow. But Caswell had four sons who "went West." Algernon Sidney Neal, Benjamin Franklin Brooks, Roy Patillo, and George Thomas Warren sleep beneath the lilies of France. To their memories I dedicate my humble work. May our County forever hold in constant recollection the memory of their Supreme Sacrifice. In the service flag of Caswell let their golden stars shine with an added lustre through the years.

In the beauty of the lilies, Christ was born across the sea,
With a glory in his bosom, which transfigures you and me;
As He died to make men holy, so they died to make men free.
Their souls go marching on.

It appears that the US government may have sponsored "pilgrimages" for mothers of WWI soldiers buried overseas, but that Leah Long Brooks declined.

Jesse Brooks married Bessie Esperann Whitfield, and they had at least two children.

Robert Julian Brooks married Maggie Fulcher, but I have found no children. He died at age 20. 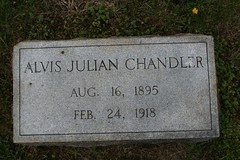 Alvis Julian Chandler was born on the 16th day of August, 1895, near Hamer, in this County. He was a son of T. Y. Chandler and Sallie Elizabeth Chandler. The mother's maiden name was Miss Elizabeth Bohannon. She was a native of Pittsylvania County, Va. The grandfather, George Chandler, saw Service for much of the time during the war between the States and was slightly wounded in one of the battles in Virginia. This young soldier, having completed the Public School Course in Caswell, spent two years at Wallburg. At the time of his Registration, he was actively engaged in farming, and on August 15th 1917, he volunteered for service; his enlistment papers being signed at the Recruiting Office, in the City of Danville, Va. He was sent to Fortress Monroe, and was assigned to service in the Coast Artillery; afterward he was transferred to Ft. Monroe, and there assigned to a company of the Field Artillery.

While in active training for overseas service, he contracted the measles; complications setting in, of such a serious nature, that on Febuary 28th 1918, he died in the Hospital, at that place. The body of this young soldier was brought back to Caswell, and tenderly buried in the Graveyard at the Presbyterian Church, in the little village of Yanceyville. Of Alvis Julian Chandler, it may truly be said; "His Soul has gone West; He laid his young life on the Altar of his Country; the Great God of Battles accepted the Sacrifice; let the people of Caswell County hold in constant recollection the memory of one of her sons who loved his country, and in loving, made the Supreme Sacrifice: God rest him."
_______________

Killed during World War I (died of complications from measles at Ft. Monroe).

Yanceyville, Feb. 28 -- A feeling of gloom spread over the town and community Tuesday when the message came announcing the death of Alvis Chandler, which occurred Monday night in the government hospital at Fortress Monroe, Va. His death was due to measles followed by pneumonia. He volunteered last August joining the coast artillery which is stationed at Fortress Monroe. He was about 22 years of age. He had been a member of New Hope Methodist church for several years. Mr. Chandler was the second son of Mr. and Mrs. T. Y. Chandler.

The funeral services were held Wednesday morning at 11 o'clock in the Yanceyville Presbyterian church, conducted by Rev. S. F. Nicks and Rev. George W. Oldham. The church was decorated with American flags, and 12 flags were placed upon the grave by 12 of his former schoolmates. The floral designs were many and beautiful. Mr. Chandler is survived by his parents, two sisters, Mrs. Miles and Miss Sue Chandler, and six brothers, George, Clarence, Clyde, Talbot, Eugene and Norman.