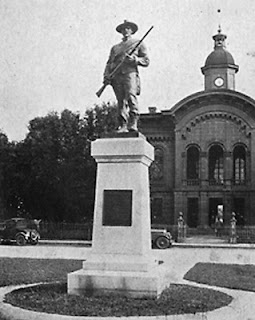 This monument, located in front of the Caswell County Court House as a memorial to the county's Confederate veterans, displays a Confederate soldier standing atop a pedestal. The bronze soldier looks northward and defiantly grasps his gun in both hands while he steps forward with his left foot. He wears the Confederate uniform complete with hat and is depicted as a man with high cheekbones, a full mustache, and a goatee.

Confederate monuments in North Carolina erected in the years prior to World War One frequently reflected bitterness and praised the rectitude of the "lost cause." The inscription on this later monument was written by Reverend James Preston Burke of Reidsville and described as "deeply thoughtful." That it focuses on the sincerity and steadfastness of the soldiers more than the division caused by the Civil War, reflects a more moderate view, perhaps brought on by the unifying effects of the United States participation in World War One.

IN WHATEVER EVENT THAT MAY FACE / OUR NATIONAL EXISTENCE MAY GOD / GIVE US THE WILL TO DO WHAT IS / RIGHT, THAT, LIKE OUR FOREFATHERS, / WE MAY IMPRESS OUR TIME WITH THE / SINCERITY AND STEADFASTNESS / OF OUR LIVES

The United Daughters of the Confederacy, founded in 1894, at first included wives, widows and sisters as well as daughters and nieces of Confederate veterans or officials. One of the purposes of organization was to minister to the needs of veterans and their families and to perpetuate their memories. Today, UDC offers educational scholarships to descendants and among its many other charitable and educational causes, ministers to the veterans of all our country's wars in government hospitals.

Chartered in 1908, the Caswell County Chapter #1152 had twelve charter members. To date the membership has included nearly 100 Daughters.

No. 1. Mrs B. S. (Mallie Graves) Graves, was the daughter of Jesse Franklin Graves, a member of the Governor's wartime Council of State, and a niece of Capt. B. Y. Graves, afterwards Lt. Col. of the 21st Regt.

No. 5. Mrs Willie Myers Kerr, was a granddaughter of C. A. Myers of Co. H, 46th Regt., Virginia Volunteers.

Active in Red Cross work in WWI, the Chapter renewed its efforts to erect a statue on the Square in Yanceyville to the memory of the Confederate veterans. The goal was finally accomplished in 1921. Caswell's first public library was started by the Daughters in 1939 and grew to the present Gunn Memorial Library. The chapter continues its charitable, educational and memorial objectives in the present day.

In memory of all the members of Caswell County Chapter #1152, United Daughters of the Confederacy who have honored their patriotic heritage during their lives, we respectfully reproduce here the membership certificate of our latest deceased member, Miss Fannie Sue Wilson, REAL DAUGHTER of John Gunn Wilson, Co. I, 5th Regt. N.C. Infantry, C.S.A., who died September 21, 1983. 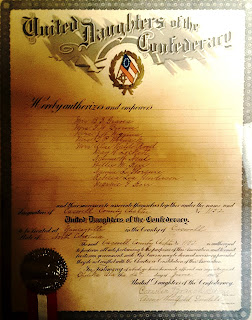 United Daughters of the Confederacy

and their successors to associate themselves together under the name and designation of Caswell County Chapter No. 1152

United Daughters of the Confederacy to be located at Yanceyville in the County of Caswell, State of North Carolina.

The said Caswell County Chapter No. 1152 is authorized to perform all acts pertaining to the purposes of this Association and to enact for its own government, such By Laws as may be deemed necessary provided they do not conflict with the Carter or Constitution of their Association.

In Testimony of which we have hereunto affixed our signatures at Opelika Ala this 24th day of June 1908.

United Daughters of the Confederacy.

At the center of the Public Square, in the village of Yanceyville, there stands a very imposing monument erected bv the Caswell County Chapter of the United Daugiiters of the Confederacy. For a number of years this chapter worked with much patience and diligence to obtain the necessary funds. The women of this Chapter secured the cooperation of the County Board of Commissioners, namely, C. H. King, T. H. Hatchett and J. M. Williams; this Board making a donation of one thousand dollars. After this donation, a county-wide campaign was put on and the required funds were raised. Following will be found the appeal and the program of the unveiling exercises, together with the addresses of Mesdames W. O. Spencer, and Geo. A. Anderson, and Mr. T. H. Hatchett. At the time of the unveiling Mrs. T. J. Florance was President of the Caswell County Chapter.

To the Citizens of Caswell County:

From 1861 to 1865 Caswell County was called upon to send her sons to battle for a just and honorable cause. Those men, feeling it was a privilege as well as a duty to uphold with their manhood PRINCIPLES which were RIGHT, protected with their lives our beloved Southland from the invading armies which were seeking to destroy our homes.

A number of those brave men were permitted to return and with the same righteous determination and patriotism rebuilt a war-torn land. Many of them have since crossed over the River, and are now mingling with their comrades who gave their lives on the field of battle. There is in our midst a scattered remnant of the Boys Who Wore the Gray. It will not be long before this remnant shall have passed away.

It has been fifty-four years since the close of the war between the States. The sons and daughters of our Confederate soldiers and the people wdio live in Caswell have done nothing that in the years to come will show our appreciation of the lives sacrificed for our State and County.

The Caswell County Chapter of the United Daughters of the Confederacy fully realize that the day is not far distant when those who wore the Gray will be with us no more. While opportunity is present, while a few of the old soldiers are still living, our Chapter with its Committee is making a most earnest appeal to the people of Caswell to contribute as much as they can in order to erect a MONUMENT on the Public Square at Yanceyville. This Monument will commemorate in a small way the deeds wrought by our ancestors, and will show our appreciation of their bravery and patriotism.

In order to see how much our people appreciate what these Confederate Veterans have done, the United Daughters of the Confederacy of Caswell County have set apart the week beginning October 27th, 1919, to give the people an opportunity of showing their appreciation by their contributions to this most worthy cause. Before you decide fully as to the amount of your contribution, we beg you to think of the advantages which have been yours, but which were denied these men whom we now seek to honor.

We beg you to bestir yourselves. Make a liberal contribution. See your neighbors and friends and insist that they do likewise. This is a County Drive. We want the names of every citizen of the County enlisted in this cause. A record will be kept of those who help. Committees appointed by the United Daughters of the Confederacy will try to see every one of you. But in the event that our Township Committee does not see you, do not hesitate a moment, but send in your contribution and the contribution of any others that have not been seen, to your Township Chairman, or to the Campaign Committee, Yanceyville, N. C.

On the night of November the first, at the close of this Drive, let it be said that the people of Caswell have responded —and responded nobly to this Cause.

Washington, Aug. 31. -- "Representative Stedman has been informed by the war department that two machine guns will be sent to Yanceyville for the unveiling of a statue there September 10. The war department has notified the commanding officer at Middletown, Pa., to turn the guns over to Mrs. Florence [sic]."

"The Caswell county chapter, U. D. C., has given the contract to erect the Confederate monument on the public square in Yanceyville. Work will begin on the monument at an early date."