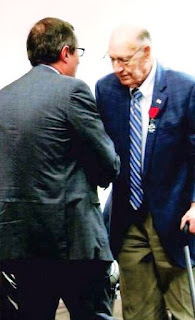 At the Levine Museum of the New South in Charlotte, North Carolina, French Consulate General Denis Barbet presented to Yanceyville's Neal Watlington and nine other WWII veterans France’s Legion of Honor medal. Initiated by Napoleon Bonaparte in 1802, it is the highest military honor France grants. To be eligible, a US veteran must have fought in one of the four main campaigns of the Liberation of France: Normandy, Provence, Ardennes, or Northern France. Only a few medals are awarded annually, and care is taken to select veterans with the most distinguished service records.

Before the awards ceremony, both the National and French Anthems were sung. Consulate General Barbet stated: “Each time, I can assure you that I was and I am deeply humbled and moved by the opportunity to meet those Veterans and express to them officially the eternal gratitude of the French for their brave service more than 70 years ago,” During the ceremony Mr. Barbet said the veterans also were knighted in France (which is part of the Medal of Honor procedure).

“I was so surprised,” said Neal Watlington. “It was so long since I was in the war.” Neal’s wife, Katherine, added: “It was a great honor and we are so appreciative.”

Neal entered the US Army May 10, 1943. On D-Day the unit he would join landed on Omaha Beach. He caught up to that unit in France on June 29, 1944. While in France he was assigned to the 69th Infantry, Company I, 60 MM Mortar Squad. Later, after being wounded by shrapnel, he was a jeep driver and machine gunner. Neal also fought in Germany and Belgium, including the Battle of the Bulge. Neal received the Purple Heart, Combat Infantrymen Badge, American Theatre Campaign Medal, Eastern Europe Campaign Medal(with four Bronze Service Stars), WWII Victory Medal, Driver and Mechanics Badge, and Good Conduct Medal. He departed France December 7, 1945, ending his military service December 21, 1945, when he was discharged at Fort Bragg, North Carolina.

After the War, Neal played professional baseball for several years. Later he and Katherine operated “Watlington’s On The Square” in Yanceyville for many years. His love of baseball did not end with his major league career. In Caswell County he promoted youth baseball, both as a coach and teacher of the game. Neal has wonderful memories of his baseball career, including meeting Babe Ruth in 1947. 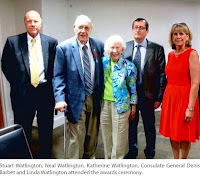 Neal is a charter member (1946) of local Veterans of Foreign Wars Post 7316 in Yanceyville. Fred Smith, VFW Post 7316 Commander, submitted the application that resulted in Neal's award. Accompanying Neal Watlington at the ceremony were his wife Katherine, son Stuart (and his wife Linda), and Fred and Sallie Smith.