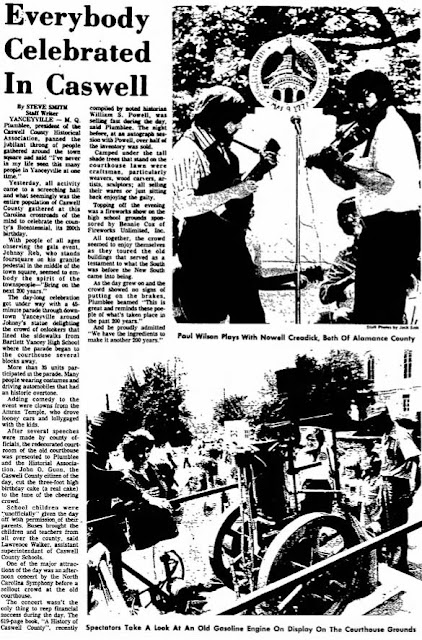 "Everybody Celebrated In Caswell"

Yanceyville -- M. Q. Plumblee, president of the Caswell County Historical Association, panned the jubilant throng of people gathered around the town square and said "I've never in my life seen this many people in Yanceyville at one time"

Yesterday, all activity came to a screeching halt and what seemingly was the entire population of Caswell County gathered at this Carolina crossroads of the mind to celebrate the county's Bicentennial, its 200th birthday.

With people of all ages observing the gala event, Johnny Reb, who stands foursquare on his granite pedestal in the middle of the town square, seemed to embody the spirit of the townspeople -- "Bring on the next 200 years."

The day-long celebration got underway with a 45-minute parade through downtown Yanceyville around Johnny's statue delighting the crowd of onlookers that lined the sidewalks from Bartlett Yancey High School where the parade began to the courthouse several blocks away.

More than 35 units participated in the parade. Many people wearing costumes and driving automobiles that had an historic overtone.

Adding comedy to the event were clowns from the Arman Temple, who drove loony cars and lollygagged with the kids.

After several speeches were made by county officials, the redecorated courtroom of the old courthouse was presented to Plumblee and the Historical Association. John O. Gunn, the Caswell County citizen of the day, cut the three-foot high birthday cake (a real cake)to the tune of the cheering crowd.

School children were "unofficially" given the day off with permission of their parents. Buses brought the children and teachers from all over the county, said Lawrence Walker, assistant superintendent of Caswell County Schools.

One of the major attractions of the day was an afternoon concert by the North Carolina symphony before a sellout crowd at the old courthouse.

The concert wasn't the only thing to reap financial success during the day. The 619-page book, "A History of Caswell County," recently compiled by noted historian William S. Powell, was selling fast during the day, said Plumblee. The night before, at an autograph session with Powell, over half of the inventory was sold.

Camped under the tall shade trees that stand on the courthouse lawn were craftsmen, particularly weavers, wood carvers, artists, sculptors; all selling their wares of just sitting back enjoying the gaiety.

Topping off the evening was a fireworks show on the high school grounds sponsored by Bennie Cox of Fireworks Unlimited, Inc.

All together, the crowd seemed to enjoy themselves as they toured the old buildings that served as a testament to what the South was before the New South came into being.

As the day grew on and the crowd showed no sighs of putting on the brakes, Plumblee beamed "This is great and reminds these people of what's taken place in the past 200 years."

And he proudly admitted "We have the ingredients to make it another 200 years."

"Paul Wilson Plays With Neal Creadick, Both Of Alamance County"