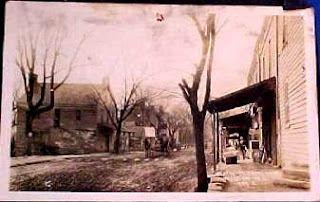 This item is posted because it refers to two Milton businesses. Note, however, the incorrect assertion that Milton, North Carolina, as of the early 1880s had never had a black business. The author appears unaware of the successful business of Thomas Day.  Photograph: Milton Business District.
_______________

"Most historians agree that only a small share of southern blacks experienced economic gains in the fifty years following the Civil War. Little attention has been focused, however, on the minority who successfully acquired property and conducted business during this time. In Enterprising Southerners, Robert C. Kenzer examines the characteristics of North Carolina's African-American population in order to explain the social and political factors that shaped economic opportunity for this group from the Civil War until 1915."

"What is surprising, Kenzer asserts, is that his research does not support lingering theories that the "heritage of slavery" adversely affected blacks' performance in the market economy. Instead, he blames economic barriers to development, such as lack of capital and poorly developed markets. This study not only provides a valuable history of one state's black population, but also paves the way for similar scholarship in other southern states."--Jacket.

Beyond the immediate postwar years, between 1880 and 1905 the [North Carolina] black business community experienced two trends: the number of black credit-rated firms increased nearly fourfold; and the number of communities with at least one such firm increased nearly threefold. [22] Although the growth in the number of black firms was remarkable, it was also quite inconsistent (table 17). During the years 1880-85 the number of firms nearly doubled; however, the downturn in North Carolina's economy during the late 1880s and the national depression of the mid 1890s prevented another doubling from occurring until 1905.

The geographic expansion of black firms was equally inconsistent. The doubling in the number of black businesses during the first half of the 1880s resulted from two factors. First, in some locations the size of the black business community increased. For example, although Edenton's population remained fairly stable from 1880 to 1885, the number of black firms within the village grew from three to five during these years. Likewise, in the village of Jamesville the number of black credit-rated firms increased from two to five during the first half of the 1880s. Second, other black entrepreneurs created new markets in communities that had never had black establishments. For example, during the early 1880s Green Oliver opened a general store and H. H. Curtis opened a confectionery in the village of Milton, in Caswell County, a community that had never had a black firm.

The fortunes of black businessmen who created new markets was also mixed. James Cross opened a combination grocery and liquor store in the village of Hamilton, in Martin County, during the early 1880s. By 1890 he had failed, and no black firm ever again was credit-rated in that village, an indication that no black enterprises located there. By contract, the previously noted Green Oliver, who initiated a general store in Milton during the same period, was able to survive in business for more than two decades. Oliver's success is especially remarkable because soon after he opened the first black-owned firm in Milton he was joined by a black competitor, G. F. Bowers, who remained in business for at least ten years. Clearly, James Cross miscalculated his chance for success as a black entrepreneur in Hamilton, but Green Oliver identified a good market in Milton.

Although entrance into this region marked a new trend for black businessmen in the 1880s and 1890s, there was a large degree of continuity even in this process. Like black businessmen in the coastal plain counties both before and after 1880, the black businessmen in the piedmont tended to locate in communities that had a higher percentage of blacks than those counties in the same section that had no black enterprises (table 19). Therefore, it is not surprising that Green Oliver opened his general store in Caswell County, which in 1880 was one of only two piedmont counties with a black majority population (59.8%).