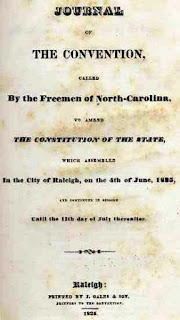 On June 4, 1835, a convention called to modify the North Carolina Constitution of 1776 opened at the First Presbyterian Church in downtown Raleigh. A special election was held in April 1835 to select 130 delegates to attend the convention in Raleigh. The Caswell County delegates were William A. Lea and Calvin Graves (1804-1877). And, Caswell County's Major James Kerr (1788-1848) served as temporary president (chairman) of the convention until the delegates could select a permanent president (Nathaniel Macon of Warren County).

After about five weeks of debate and votes, a slate of constitutional amendments was adopted. The main changes made by the convention had to do with elections and who could hold certain offices. Under the new constitution, free African American men, who had previously been able to vote, were disenfranchised. Elections for the General Assembly shifted from being held annually to be held every other year, and the way each chamber's membership was apportioned changed. Balloting for governor shifted from the legislature to popular vote, the governor's term was extended from one to two years, and all Christians, not just Protestants, became eligible to hold public office.

North Carolina's state constitution would not be completely overhauled again until Reconstruction (1868).

William A. Lea and Calvin Graves voted with the majority (vote: 66 to 61) to take the right to vote from "free blacks, free people of color, and descendants of Native Americans."

William A. Lea has not been identified. One possibility is William Archer Lea (1786-1843), a wealthy Leasburg farmer (and slave owner).