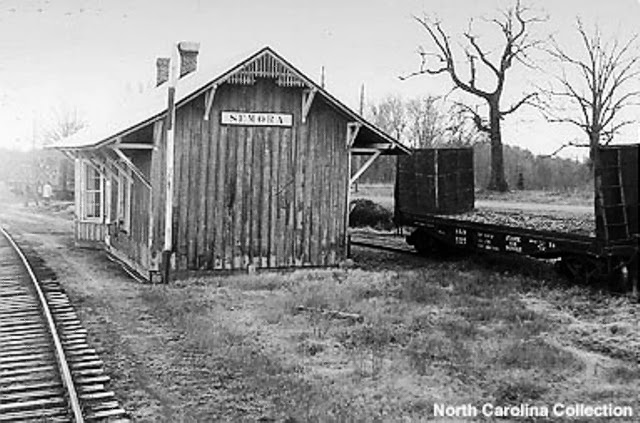 Semora is a community located in the northeast corner of Caswell County, North Carolina, bounded on the north by Virginia and on the east by Person County. There was settlement there as early as 1755, known as Campbell's Crossroads. Two major stage coach lines crossed there, one running east-west, and the other following a north-south route.

The history of many American communities can be traced by studying the history of the area's churches. One of the oldest Presbyterian churches in North Carolina, Red House, is located approximately one mile from the center of Semora. The church dates from before 1755. Another early church is Lebanon Christian Church of Christ, dating from 1845. Later churches include the Baptist Church, established in 1906, and the Methodist Church, organized in 1920.


Before public schools were established, private schools served the community of children. Usually these schools were built in the church yards or nearby. Hico (Hyco) Academy was built in 1804 near the home of Colonel Archibald Murphey. On September 1, 1804, Colonel Murphey sold for five shillings, four and 7/10ths acres on the waters of Hico to John McAden, Thomas J. Moore, James Rainey, Samuel Smith, John Ogelby, Hearndon Harrelson, and Swepson Simms, trustees of Hico Academy. In 1811, an additional two and one-half acres were purchased from Thomas Jeffreys for one dollar, near Colonel Murphey's, to be used for the Hico Academy. The building was lost by fire in 1809. In 1812, the trustees completed "an elegant brick building." In 1834, Hico Academy was charging eight dollars a session for "some of the elementary branches of English education" and fifteen dollars for "Latin and Greek languages or mathematics." The first principal was Reverend Hugh Shaw.

A private school operated on the Lebanon Church yard for many years and continued there until public schools were established.

In the early part of the twentieth century, the state provided a three-room school building. In 1928, a four-classroom building replaced the original school building. This building was two stories, with classrooms on the first floor and an auditorium on the second floor. In 1934-35, the Semora and Milton schools were consolidated, and a brick building was erected between the two communities. This was a high school that carried the name Archibald D. Murphey. The building burned in 1943 and was not replaced until 1948. In 1951-52, the high school was consolidated with the Bartlett Yancey High School in Yanceyville. The Murphey school became a consolidated school for African-American students and was renamed New Dotmond. A smaller building erected four miles south of Milton also carried the Murphey name. After county schools were fully integrated, the New Dotmond school was discontinued and the building sold.

Early settlers in the mid-1700s included families bearing such names as DeBow, Murphey, Rainey, Samuel, Jeffreys, and Saunders. Solomon DeBow Murphey was in the Semora area as early as 1755. Archibald Murphey married DeBow's daughter, Jane DeBow. They lived on Hico Creek in the first frame house in Caswell County, called "Murphey's Castle." One of their daughters, Elizabeth Murphey, married Dr. John McAden, a son of the Reverend Hugh McAden. He and his wife are buries at Red House Presbyterian Church in unmarked graves. A son of Colonel Murphey, Alexander Murphey, was a merchant and planter in Caswell County. He was a Lieutenant Colonel in the Caswell Militia in 1814 and was Clerk of Court from 1818 to 1822. Another son of Colonel Murphey was Archibald DeBow Murphey, an outstanding leader in the affairs of state government in the early nineteenth century.

When the Southern Railway was built from Danville, Virginia to Norfolk, Virginia around 1890, it had a great influence on the lives of many young men in the area. Many became railroad employees -- from engineers, telegraph operators, conductors, to section masters.

Semora had early telephone service when the Yanceyville Telephone Company flourished. The area is now served by Southern Bell. In 1917, there was a Semora Community Fair. The Caswell County News, published in Milton, told of the affair: "The grand parade to the graded school building where the fair was held, was headed by a beautifully decorated float with Miss Myrtle Winstead representing the Goddess of Liberty surrounded by a lovely group of beautiful children and then followed by numerous decorated floats and vehicles bearing the officers of the fair and hundreds of spectators. There were really thousands of fine exhibits to be judged."

The kerosene lamp is not too far distant for many to remember. Carbide lights followed when that commodity was invented at Spray, now Eden, Rockingham County, North Carolina. Electricity became available around 1926 or 1927.

Before the State Highway Commission was operating, the citizens had to maintain the roads adjacent to their property. As late as 1919, Mrs. Bettie T. Rainey was on a committee to work for good roads.

It is common knowledge in Caswell County that a contingent of Lord Cornwallis's army camped on the Red House Church grounds in 1781 and committed many depredations throughout the area during their stay. Among their dastardly deeds, were the destruction of the property of Reverend Hugh McAden, violation of his grave, and attempted burning of the church.

Semora has an active Ruritan Club and Volunteer Fire Department. A Community Watch organization has been active for several years. Although a rural area, the community is a closely knit one, and the citizens care for their own in a most exemplary manner.
_______________

Semora is an unusual name. As noted above, the post office (and thus the surrounding community) was named after the daughter of the first postmaster: Semora Stella McAden (1871-1919). McAden family tradition is that she actually was misnamed. McAden relatives in Texas were consulted with respect to her name and are thought to have suggested "Senora." However, as a result of poor or elaborate penmanship, an extra loop was added to the "n" resulting in "m" and Semora instead of Senora.
_______________

Another historical sketch on Semora by Betty Kersey. “The suggestion for the name was sent to Mr. John McAden, the first postmaster here, by a relative living in Texas (this was about 60 years ago). The name is of Spanish origin.” [Yes, Señora with a tilde over the “n” is indeed of Spanish origin!]
Posted by RSF at 2:07 PM