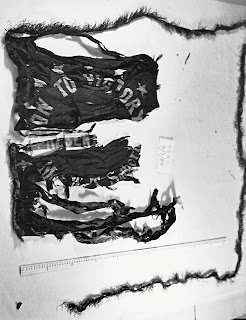 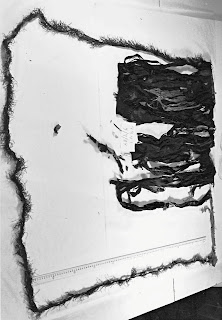 The flag contains the inscription: "presented by Mrs WT Sutherland." She is the wife of William Sutherland of Danville, Virginia, but a native of Greensboro, North Carolina. Mrs. Sutherland presented a flag with that inscription to the 21st Regiment North Carolina Troops in February 1862, and Lee even has correspondence between W. T. Sutherland and George Ruskell, the Richmond flag maker, during its production. Major W. G. Pfohl of the 21st Regiment North Carolina Troops was also killed at Cedar Creek, shortly after sending his own ambulance to pick up General Ramseur and take him south. Lee believes this is how the flag ended up in Ramseur's ambulance.


Lee also has transcribed a letter from Lt. Colonel Will L. Scott (21st North Carolina Troops) to Janie Sutherlin, thanking her for the "On to Victory" flag. The text is set forth below.

As a result of Lee's efforts, the Museum now correctly identifies the flag as being flown by the 21st North Carolina Troops. 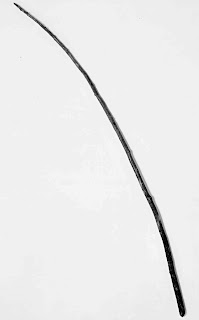 The "flag stick" captured with the flag is a willow branch measuring 6'6" in length and 1 1/4" in diameter at the large end, 3/4" at the taper. To this is what Confederate forces had been reduced by October 1864.

Mid the thick gloom which is now overshadowing the soldier's heart by reason of the unfortunate reverses which our arms have sustained in Carolina and in the West, the gorgeously beautiful flag, which you did our Regiment the honor to present it through Lieut. W. S. Hill, came to us with a joy as life-imparting and buoying as that which "a sweet vision" bringeth to a saddened and stricken mind "at the dead hour of night".  Though greatly mortified and somewhat discouraged by those disasters, yet our soldiers are not at all despondent of ultimate and triumphant success. And, especially, is it encouraging to them to be remembered so gracefully by a patriotic and devoted daughter of the South, one who was born in the very section of country from which the Regiment hails and who is by adoption an inhabitant of the state whose soil they have been and are now proudly and gallantly defending.

Were we to take the elegant taste and rich beauty displayed on this glorious confederate Flag, as betokening your interest in our regiment, it is the most intense and lively, and, indicating your devotion to the cause for which we are battling, it is the most ardent and elevated.

Let me assure you, your kind remembrance of us in our hard and perilous life has inspired in our bosoms the liveliest intentions of affection and gratitude, emotions which no language can fitly or adequately express. Though no brave and good man wishes foolishly and uselessly to imperil his life, yet if the wicked aggression of the Northern Vandals and Goths makes it necessary, our Regiment will cheerfully and proudly bear this brilliant banner "on to victory", or to a glorious martyrdom for Southern freedom and independence! When no one is left to tell the story of our inspiration on the altar of our beloved country, then and only then, will it go down in dust and defeat.

Allow me, in the absence of Col. Kirkland, to express to you the grateful acknowledgements of the entire Regiment for this high and unmerited compliment.

Believe me, my dear Madam,