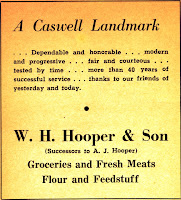 "After making your selections, your next move is to see if you can purchase the seeds locally. Opened since 1895, W. H. Hooper & Son, located in downtown Yanceyville, is the largest seed purveyor in the area. It is also the best place to purchase bulk seed for microgreens. If Mike [Hooper] doesn’t have the seeds I am looking for, I order online."

Note that a print advertisement for the store (included in the booklet Ann of the Ku Klux Klan, by Tom Henderson) states that W. H. Hooper & Son are "Successors to A. J. Hooper". This probably was when the store was located at the corner of the west part of the Yanceyville Square, which today is occupied by the Yanceyville Drug Store. After the site was W. H. Hooper & Son it became Price's Supermarket. The Hooper store moved a short distance across Greensboro Street, where it remains in business today.

The following is from Wheel Tracks: Service Publication of the Yanceyville Rotary Club, Thomas Johnston Henderson (1942-1943): 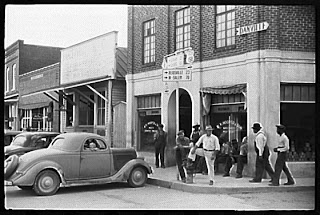 The way to make friends is to be friendly; the way to hold them is to be unselfish, sincere, loyal and square-shooting. Henry Hooper, possessing in his nature these attributes of heart and brain, found this out ling before the popular author had written his book on "How to Win Friends and Hold Them," or something like that title. I have known Henry all his life, while Dr. Steve Malloy, who ushered him into the world, will testify whereof I speak. Even as a small tot, when he was toddling around in his Uncle Albert's store, he had winsome ways which endeared him to all the customers. He early showed an aptitude for merchandising, and this uncle, who without any training in store keeping, had established a successful business on a foundation of accommodating service, encouraged Henry's tendencies, having in mind the hope that this beloved nephew would well and faithfully carry on the store he had established after he was gone.

Albert has been dead for 16 years, but his store lives and serves more progressively and prosperously in a much wider field, holding the customers of yesteryear and adding new ones day by day, in spite of rationing and red-tape. Surely Albert Hooper, if he can see beyond the shades of the grave, rejoices in seeing that Henry has not misplaced the confidence he had in him. "Hooper's Store" is the oldest business institution in Yanceyville, with the exception of "Harrelson's Store."

Henry was born June 24, 1905, in Yanceyville, just beyond the corporate line of that date, being the eldest son of William Henry and Eula Harris Hooper. "Billie" was born just about the time the Civil War ended, when the South was flat on her back, and he came up the hard way, with little schooling and arduous toil, but he had the curiosity which seeks to learn, and before his death he was a well-informed man, with a philosophy of life all his own--devoted to temperance, civic righteousness and religious beliefs. Henry's mother came from Person County, and I speak of my own knowledge when I say there has not come to Caswell a better, nobler, Godlier wife and mother, of higher ideals, greater energies and more consecrated devoutness.

Henry finished at Bartlett Yancey High, and then went to Oak Ridge Institute, where he majored in business training. On Christmas Day, 1928, he married Katie Everett, a daughter of the late Mr. and Mrs. Nick Everett, who had some years before moved from their native home of Caswell to Danville. The union has been a happy, congenial one. Like most wives, Katie has some idiosyncrasies, but she has also many fine qualities, is a good sport and doesn't overly abridge Henry's liberties or draw the lines too taut--appreciating the value of a good husband. They have a lovely home, are full of hospitality and are fine neighbors. They have two bright, sprightly and promising sons. Charles Henry is already evidencing a predilection for a business career, while "Jackie" is full of mischief and very lovable.

One of Henry's early ambitions was to be a Mason, and he attained this honorable ambition shortly after attaining his majority years. He has enjoyed its principles, privileges and honors. In planning his new store building, to take the place of the old "Star Saloon" location, lately occupied by The Caswell Messenger (which building alone of all others on the public square, excepting the courthouse, has survived the ravages of fire and decay in my lifetime), he provided a Masonic Hall, which is also used by the Junior Order United American Mechanics. He is a charter member of our Rotary Club, and does his bit worthily. He is a Methodist, steward and trustee, and he and his good wife (who has a background of Presbyterianism) had big parts in the building and financing of the new Methodist church, he being chairman of the building committee and she of finance. Henry Hooper backs every cause and move for the progress and good of our town and county. In truth, it may be said he is a splendid asset to Yanceyville and Caswell County.
_______________