"The County at Home: A Visit to a History House in Locust Hill . . . Bedford Brown's Home -- Rose Hill" 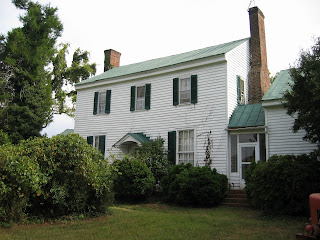 Rose Hill ... the thought itself is elegant. Imagine, if you will, a late summer evening. The type of weather conducive to early evening conversations after a hearty meal. Porches with swings that creak ever so rhythmically. The familiar smell of tobacco curing in a wood-burning barn. Or, go back a few years before Bright Leaf and think of an old stage coach road and a horse-drawn carriage. It stops and down steps a young woman, soon to be married to the plantation owner she has come to visit. She is Lucy Williamson. Her fiance is Jethro Brown. Lucy Williamson is accompanied by a member of her Caswell County pioneer family.

The house is huge and the hill all covered with flowering rose bushes, tall cedars, sprigs of English Boxwood and other beautiful trees. Ten thousand acres of Caswell County land carried the name of Brown, and much of it surrounded the newly built colonial mansion. Jethro Brown built the house and married Lucy Williamson. Later, the 1802 structure had added a parlor and numerous outbuildings. The home is healthy and strong to this day and has housed five generations of Browns including the most famous, U.S. Senator and State Legislator, Bedford Brown.

Caswell County is fortunate to be the site of so many fine homes - well preserved and still holding the memories of a glorious past. This writer found Rose Hill to be the epitome of architectural and historic wealth. The following article concerns itself with a beautiful home and its surroundings; with its current resident and with its future. Mrs. Mary Brown is the mistress of Rose Hill as well as its voice. She offers her time joyfully on a summer afternoon and graciously allows our camera inside to share with you a treasure of the Southland. The weather is warm, she is freezing corn and speaking of a recent trip with her family.

Mrs. Brown reflects: "Actually the home was built on Jethro Brown's return trip from South Carolina. He had owned tremendous amounts of land there and had gone to raise indigo. The Tories destroyed this land, so he and his father, John Edmunds Brown came here to Caswell. Bedford was the son of Jethro and Lucy - one of eight children and chose to make his home here. He was a very famous man with the respect of many government figures of the time. He served two terms in the U.S. Senate, came home in 1840 and was elected to the N.C. State Legislature. Just before the Civil War, he came out strongly opposed to secession from the union, but finally signed the articles of secession, showing his loyalty to this home state. His political career ended in 1868 and he returned to Rose Hill once again." 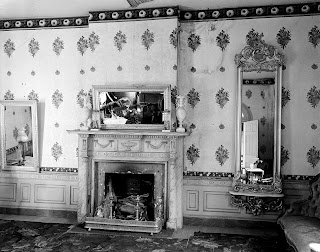 Bedford Brown could not have led a tour of this historic house with any more fervor than that displayed by "Miss Mary." The parlor was of particular interest because of its adornments. "This wall paper was original with the addition of the parlor," she chirped. If you will feel it, you will see the design is raised right above the chair rail section. I am told this hasn't been done with wall paper since the early 1800s." Not only is the wall covering a true specimen of historic delight, but the wainscoting and the mantel share a singular design. Also, the mantel has been marbleized - or treated to give the wood a marble-like finish. The living room, or library as it was used in olden days is full of books dating back to the early 19th century. Also, in the library are beautiful reminders of the days before the civil war, when the house welcomed visiting statesmen for a stay-over with the Senator. The paintings, the papered and stenciled designs covering the well-kept walls, and the old writing desk with quill and font bring to mind an era of simplicity and elegance simultaneously. 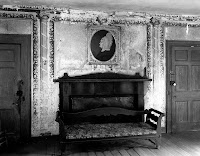 Interior work has helped Rose Hill maintain its antebellum flavor. "No, we've never done a massive face-lift of the house. It is now pretty much like it was a hundred years ago. We did work on the kitchen area to get it like you see it today. We've tried to continue the spirit and feeling that this old house has had all along. My husband and I more or less camped out here when we began to work on the place. That was back in the fifties. But still, we have had respect for its original appearance."

Outdoors, some of the Bedford Brown original boxwoods from England grow tall and stately. Though a century has passed since they were planted, their massive figures still adorn the yard and grounds with evergreen fullness. In addition, crepe myrtle trees are towering examples of strength. However, in full bloom, their beauty is as delicate as the breeze which gently waves their petals and leaves.

Another feature of the outdoor portion of the home is the Brown family cemetery. "I had to rescue the markers of Jethro and Lucy from another cemetery. I brought it up here to place alongside the other graves out there. Would you like to see? The cemetery is all grown up again - a lot of weeds. It's hard to keep them out, they grow so fast. My son and his grandson will probably be buried out here. My grandson is a student at the University. He says he wants to be married right out here," she pointed through the boxwoods. We then returned to the rear of the house where Mrs. Brown referred me to the bricks which had been laid to form a patio level with the ground. "I laid these bricks, myself," she spoke matter-of-factly. "Just keeping them level was the hard part."

Mrs. Mary Brown and your writer had a wonderful conversation later that afternoon about historic home places in North Carolina and especially in Virginia. While she is indeed the Mistress of Rose Hill, Mrs. Brown is equally involved in another historic venture - Prestwould - which is the home place of the Peyton Skipwith family of Virginia. Mrs. Brown divides her time as best she can between the two magnificent and historic structures. Her interest in the past is surpassed only by her energy in preserving history for all of us to enjoy.

Soon we will visit Rose Hill again, whether as a part of our investigation into county cemeteries, or a series on county plant life featuring trees of antiquity. But one thing we know for sure. we will be welcomed heartily at the Brown family home place, Rose Hill.

Raleigh, NC: In the 1820s, master craftsman Thomas Day built furniture for U.S. Sen. Bedford Brown and his estate near Yanceyville. Now, more than 180 years later, the family is parting with some of the pieces. Day, a free black man who lived from 1801to 1861, made some of the best furniture in North Carolina during his time. Despite living in the antebellum South, he was so well-respected that white men apprenticed for him. Nine of Day’s pieces, including a sofa worth an estimated $2,000 to $4,000, are being sold Saturday starting at 10 a.m. at the Tory Hill Auction House on Hillsborough Street near the State Fairgrounds. Seven of the nine pieces come from Sen. Brown’s estate, Rose Hill, where the furniture has resided since it was built.

“The house is still so full of original furniture and pieces,” said Robert Brown, a direct descendent of the senator Brown said his family decided to sell some of the furniture to raise money to help restore the estate, which they hope to open to the public. Plus, Brown and his wife are moving in and faced a problem - there was just too much furniture.

Day was highly regarded, making furniture for senators, congressmen, UNCChapel Hill, and even the governor’s mansion, said Jack Williams, a member of the board of directors at the Thomas Day House and Union Tavern in Milton. “He made all the pews in the Presbyterian church here with the understanding that his family could sit downstairs with the rest of the people, rather than up in the balcony with the slaves,” Williams said.

But Day also had to walk a fine line, especially because he owned more property and land than some white men in the area, said Michael Ausbon, decorative art associate curator at the N.C. Museum of History. He even owned slaves, though historians are unsure whether that was for labor or to find ways to help them. “He was very successful at balancing that tightrope of surviving as a free person of color in a white-dominated antebellum society,” Ausbon said.

Jason McCoon, owner of Tory Hill, said this is the first time Day’s work has come through his auction house. But Day’s furniture has only become well-known in the last decade, he said. “His work has finally been recognized as not only prolific but really high quality and really nice,” McCoon said.

That recognition included a three-year exhibit at the N.C. Museum of History that encompassed Day’s life, business, and furniture. Pieces from the exhibit have been moved to the Smithsonian American Art Museum’s Renwick Gallery in Washington, D.C., but Day can still be seen at the North Carolina museum - his statue is on the steps outside.

Even after living at Rose Hill as a child, Brown still marvels at the history of the estate and the furniture. “These places were made to host parties,” he said. “It’s amazing to sit and think back about people that were U.S. senators and possibly even presidents, and other congressmen, sitting around, drinking beers, eating there and talking. “People say, ‘If the walls could talk ... .’ In this case, it’s, ‘If the furniture could talk, the things they could say.”